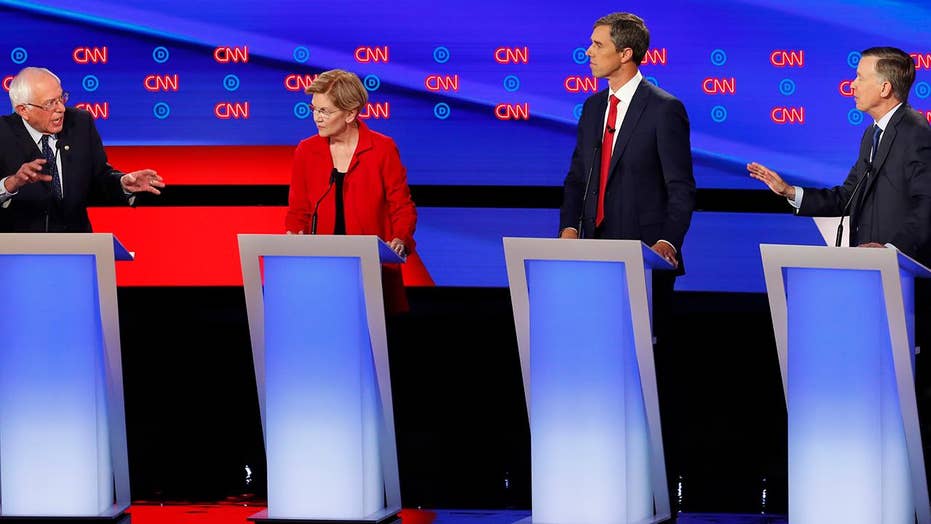 Does any 2020 Democratic presidential candidate have a viable health care plan?

As prominent 2020 Democratic hopefuls took the stage for the first of two debates in Detroit, Mich., outspoken celebrities took to social media to sound off on the messy political drama that unfolded.

Mark Ruffalo shared his disappointment with the conversation at the end of the night noting that Republicans somehow led the all-Democrat conversation.

“It's disappointing to see some Democrats repeating Republican talking points to attack the BOLD ideas the US needs! The Majority of American people support:

Bill Maher joked that Joe Biden, who was not on stage for night one of the debates, was performing well.

"Two observations: This is going on too long. And Joe Biden is having his best performance!" he wrote.

"We’re five candidates in and so far I feel confident about a Trump re-election," mocked comedian Michael Ian Black.

"To beat Trump, we need both bold ideas and messengers who can inspire the American people to rally behind them. There are only a handful of candidates who have both of these qualities. Let’s narrow this down," a frustrated George Takei noted.

Alyssa Milano got the ball on winner selections rolling when she came out strong for Elizabeth Warren during the debate saying: "I love @ewarren so very much. She’s looking incredibly presidential."

As did "The View" host Meghan McCain, who wrote: "The night is Warrens and it’s not even close... #DemocraticDebate."

She also scolded Tim Ryan for his conduct during the National Anthem.

Amber Tamblyn also advocated for Warren with a photo.

Sarah Silverman shared a clip of Warren slamming Delaney calling it the "moment of the debate."

".@SenWarren says she doesn't know why anyone goes through all the trouble of running for POTUS to talk about what we can't do and shouldn't fight for #demdebate," Maria Shriver summarized.

John Leguizamo tweeted a rundown of his top contenders for the night with Warren beating Bernie followed by Klobuchar and Buttigieg.

Billy Eichner discussed Marianne Williamson while stopping short of giving her his support.

"I’m not sure Marianne Williamson should be President but I definitely want her to live in the White House and STARE at whoever *is* President," he wrote.

Jimmy Kimmel, however, pulled no punches in lambasting Williamson.

"Marianne Williamson is like if the trailer for the movie #Cats became a person. #DemDebate," he wrote.

He wasn't alone in taking a shot at less-popular candidates.

"Ah, no. It's not fair but I cant see this smile for 4 yrs. Id feel completely insane. #DemocraticDebate," wrote comedian Kathleen Madigan over a photo of Delaney.

"Sanders and warren are the existential threat to the corporate globalists," wrote actor John Cusack of the clash between Warren and Sanders

."Bernie & Elizabeth Warren just realized they're Walter White & Jesse Pinkman and must now protect each other from all these people trying to off them both," wrote John Fugelsang.

Meanwhile, comedian Patton Oswalt opted for a silly tone rather than a politically charged one, writing:

Even former "Jeopardy!" champion James Holzhauer got in on the fun with a photoshopped image of himself on stage.

"Crushing this debate," he joked.