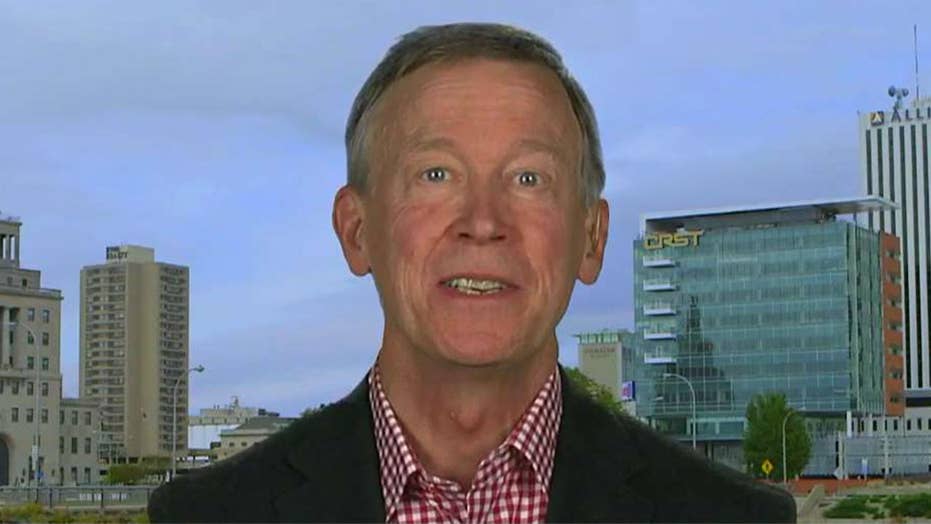 John Hickenlooper says the Democratic Party is a 'big tent'

Former Colorado Governor John Hickenlooper weighs in on whether or not there is room for a moderate candidate in the 2020 Democratic presidential primary field.

Former Colorado Gov. John Hickenlooper warned during Tuesday night's Democratic primary debate that "you might as well FedEx the election to Donald Trump” if the party adopts Bernie Sanders' "Medicare for All" plan, the so-called Green New Deal and other populist initiatives.

"The policies -- this notion that you're going to take private insurance away from 180 million Americans," Hickenlooper began. "The Green New Deal, making sure every American is guaranteed a government job if they want -- that is a disaster at the ballot box, you might as well FedEx the election to Donald Trump"

In an explosive moment minutes later, Warren, seemingly frustrated by the pushback, unloaded after Delaney also sounded notes of caution.

"I don't understand why anybody goes to all the trouble of running for president of the United States just to talk about what we really can't do and shouldn't fight for," Warren said, her voice raised.

In response, Delaney Campaign Manager John Davis shot back in a statement.

"It’s not about mushy compromise, it’s about getting the policy details right and not running on just what’s the best slogan," Davis added.

Earlier this month, Hickenlooper took a shot at his fellow 2020 Democrats, suggesting that his fundraising numbers were lower than theirs because they promised "free stuff" to voters.

"The bottom line is, for a small campaign like us from... you know -- Colorado's about 6 million or a little less than 6 million people -- it's harder to raise money because we don't, we're not promising free health care or, you know... free tuition for everyone, to forgive student debt," he told MSNBC.

In an interview with Fox News this month, Hickenlooper said most Americans wouldn't support major changes to the health care system.