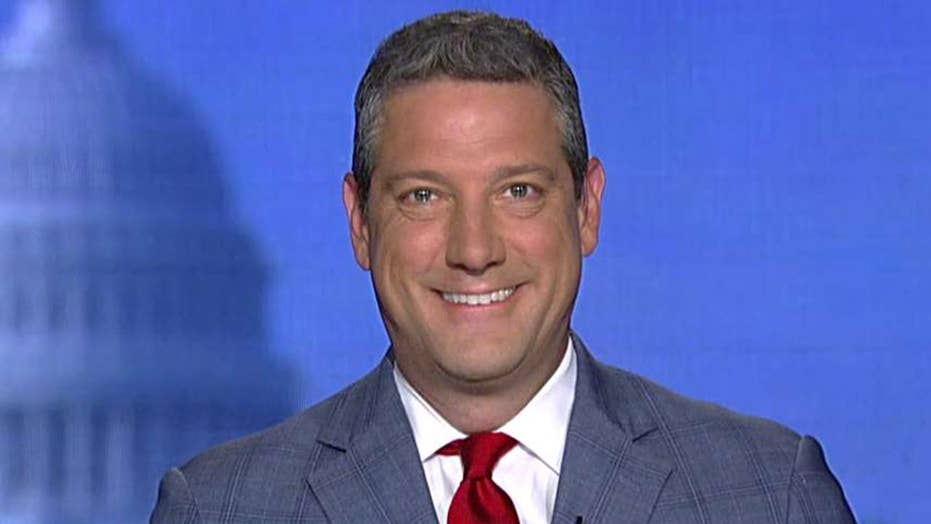 Ohio Democrat Rep. Tim Ryan breaks down his policy approach for America and reacts to President Trump's feud with the progressive Democrat 'squad.'

Democratic presidential contender Tim Ryan stood out as the only candidate who didn't put his hand on his heart during a performance of "The Star-Spangled Banner" at the opening of Tuesday night's debate in Detroit,  prompting commentators to zing the marginal candidate even before opening statements began.

As the national anthem played, Ryan was the only candidate to stand with his hands clasped in front of his body, rather than at his chest.

Added Meghan McCain: "Put your hand over your heart for the star spangled banner Tim Ryan!!!"

The Daily Wire's Ryan Saavedra wrote, "All these candidates have contempt for America, Tim Ryan is just choosing to be honest about it."

Others speculated that Ryan had simply forgotten to place his hand on his heart.

A similar episode is possible at Wednesday night's debate, when another batch of Democratic candidates will take the stage. Washington Gov. Jay Inslee reportedly inquired last week whether "The Star-Spangled Banner" would be played at the debate, prompting speculation as to his plans for the performance.

Ryan, who challenged House Speaker Nancy Pelosi for the role of minority leader in 2016, has struggled to gain momentum. He has sought to appeal primarily to blue-collar voters in the Midwest.

Speaking to Fox News' "Sunday Morning Futures" last month, Ryan said the real problem at the southern border is that so many people feel the need to flee their home countries in the first place.

"Why are these people migrating to the United States? Because gangs are running Honduras and Guatemala and El Salvador," he said. "So a real president would say, 'Let's get to the root of the problem, let's fix it so these people can stay in their own homes in Central America.'"