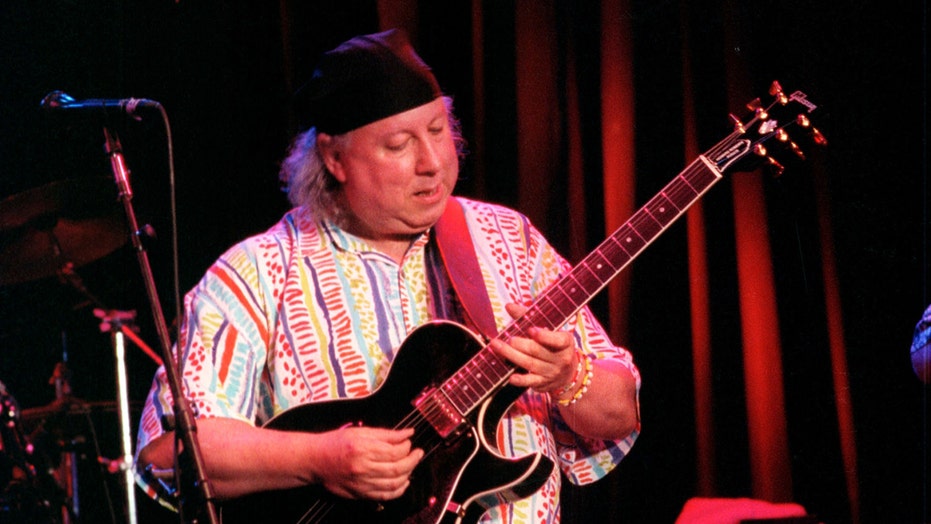 Mick Fleetwood, the musician who co-founded Fleetwood Mac alongside Peter Green in 1967, is speaking out after news of his untimely death.

In a statement shared with Fox News, Fleetwood recalled Green's significance in helping him get the band off the ground decades ago.

"For me, and every past and present member of Fleetwood Mac, losing Peter Green is monumental! Peter was the man who started the band Fleetwood Mac along with myself, John McVie, and Jeremy Spencer. No one has ever stepped into the ranks of Fleetwood Mac without a reverence for Peter Green and his talent, and to the fact that music should shine bright and always be delivered with uncompromising passion!" Fleetwood, 73, said in a written statement.

Peter Green is performing at the Fillmore Audiitorium in San Franciso, California on January 1, 2003.  (Getty)

He also shared a message specifically for Green.

"Peter, I will miss you, but rest easy your music lives on. I thank you for asking me to be your drummer all those years ago. We did good, and trail blazed one hell of a musical road for so many to enjoy. God speed to you, my dearest friend…," he concluded.

Stevie Nicks said in a statement: "I am so sorry to hear about the passing of Peter Green. My biggest regret is that I never got to share the stage with him. I always hoped in my heart of hearts that that would happen. When I first listened to all the Fleetwood Mac records, I was very taken with his guitar playing. It was one of the reasons I was excited to join the band. His legacy will live on forever in the history books of Rock n Roll. It was in the beginning, Peter Green’s Fleetwood Mac and I thank you, Peter Green, for that. You changed our lives…"

Fleetwood and Nicks' statements come as several other musicians around the world, who either knew or simply admired the famed guitarist, reacted to his death on Saturday.

Singer Yusuf Islam, who used to be known by the stage name Cat Stevens, remembered Green as "one of the unsung heroes of musical integrity, innovation and spirit."

"Most sadly have lost one of the most tasteful guitar players ever," Frampton wrote. "I have always been a huge admirer of the great Peter Green may he rest in peace."

Blues guitarist Bernie Marsden thanked Green for "everything" and said he had the pleasure of spending some time with Green over the last couple of years.

"He made me laugh, cry, wonder, and never failed to make me pinch myself when we were alone one to one. There I was, sat with my hero. As a musician I can only be one of the millions he touched, his talent for guitar playing, vocals and harmonica would have been more than most people could have possibly wished for, and then you add those wonderful songs, original, vibrant, atmospheric, outright psychedelic and so much fun, to listen to and witness," Marsden wrote.

Marsden also tweeted a photo taken of Green at his house in February, the same day Fleetwood Mac performed a tribute to Green at the London Palladium. He recalled Green's "cheeky mood" that day.

"When I asked if he would like to have been in London, he shrugged a little, gave me a smile and said, 'No, I'm having a cup of tea with you.' He made great tea," Marsden concluded.

Green died in his sleep at the age of 73, his family confirmed in a statement released Saturday.

"It is with great sadness that the family of Peter Green announce his death this weekend, peacefully in his sleep," the statement reads.

Fleetwood Mac made its debut at the British Blues and Jazz festival in the summer of 1967, which led to a recording contract, then its first album in February 1968. The album, which included “Long Grey Mare” and three other songs by Green, stayed on the British charts for 13 months.

FLEETWOOD MAC IS IN HARMONY ON SUMMER TOUR

Green left the band in 1971. Even so, Mick Fleetwood said in an interview with The Associated Press in 2017 that Green deserves the lion’s share of the credit for the band’s success.

“Peter was asked why did he call the band Fleetwood Mac. He said, ‘Well, you know I thought maybe I’d move on at some point and I wanted Mick and John (McVie) to have a band.’ End of story, explaining how generous he was,” said Fleetwood, who described Green as a standout in an era of great guitar work.

In his absence, the band’s new line-up, including Christine McVie, Stevie Nicks and Lindsey Buckingham, gained enormous success with a more pop-tinged sound.

Green was confined in a mental hospital in 1977 after an incident with his manager. He was released later in the year, and married Jane Samuels, a Canadian, in 1978. They had a daughter, Rosebud, and divorced the following year. Green also has a son, Liam Firlej.

Green returned to performing in the 1990s with the Peter Green Splinter Group. But in 1998, he made a rare appearance with Fleetwood Mac when the group was inducted into the Rock and Roll Hall of Fame.

Green, to some listeners, was the best of the British blues guitarists of the 1960s. B.B. King once said Green “has the sweetest tone I ever heard. He was the only one who gave me the cold sweats.”