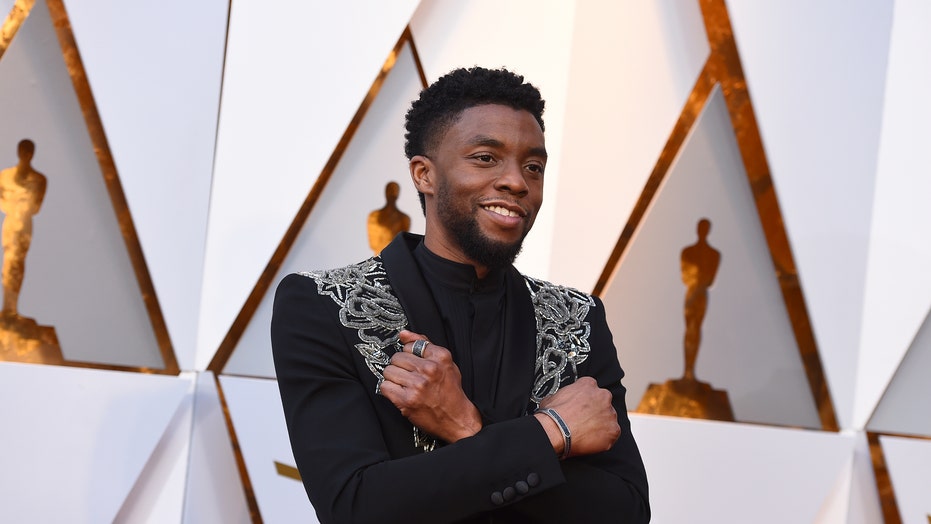 Michael B. Jordan, who starred as the villain Erik Killmonger, Lupita Nyong’o, who played Nakia, and Winston Duke, who portrayed M’Baku, were all seen in photos from the oceanside tribute in Malibu, Calif.

The service was held Saturday, according to The Sun.

The outlet obtained photos of the tribute, which included flowers, an altar, flower and photo displays and a musician playing a drum.

Chadwick Boseman arrives at the Oscars at the Dolby Theatre in Los Angeles.  (Jordan Strauss/Invision/AP)

“Chadwick was diagnosed with stage III colon cancer in 2016 and battled with it these last four years as it progressed to stage IV,” the actor’s family wrote in a statement at the time.

The statement continued: “A true fighter, Chadwick persevered through it all, and brought you many of the films you have come to love so much.”

“From ‘Marshall’ to ‘Da 5 Bloods,’ August Wilson’s ‘Ma Rainey’s Black Bottom’ and several more, all were filmed during and between countless surgeries and chemotherapy. It was the honor of his career to bring King T’Challa to life in ‘Black Panther.’”

Days before the late actor’s wife organized a private memorial, Boseman’s hometown of Anderson, S.C., held a showing of “Black Panther” in honor of the actor.

“He was beloved here, the same way he was around the world," city spokeswoman Beth Batson said Thursday.

In Anderson, a city of about 28,000 people, “there's deep sadness and grief, but it has a bounce out of it that is such inspiration," Batson said. “That's because Boseman inspired so many people in the community,” she said.

Boseman’s family, however, was not in attendance.