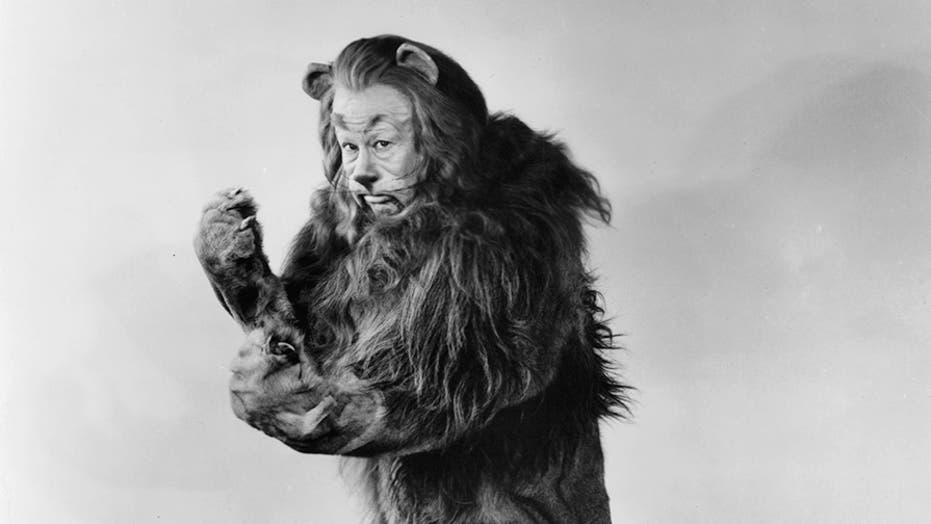 Bert Lahr’s most iconic role is that of the Cowardly Lion in “The Wizard of Oz" -- but his daughter said the comic actor didn’t witness the magic of his own work until much later in life.

“My father would never watch his own movie work because he didn’t really like his movies except for ‘Zaza,’” Jane Lahr recently told Closer Weekly. “When ‘The Wizard of Oz’ came to C, he never watched it until very close to the end of his life. I was home from college and it came on television and he watched it. And he thought, ‘Hmm, that’s OK. That was good.’”

“He was a great stage performer, because of his energy and his physicality and his sounds,” the 77-year-old continued. “He was a perfect Lion because even when he was a vaudevillian, he made these animal sounds. He had all of the body movements, all of the power, all of the physicality, but he also had a sweetness and a pathos -- a vulnerability that we all, as human beings, understand.

“We love that and so, in a way, at the end of the movie, when Judy Garland kisses Ray Bolger, the Scarecrow, and says, ‘I’m going to miss you most of all,’ I always thought, ‘Oh, you are not. You’re going to miss the Lion most of all because he was the most adorable.”

Lahr passed away in 1967 at age 72 after collapsing on the set of his last film, titled "The Night They Raided Minsky’s.” According to Turner Classic Movies (TCM), Lahr succumbed to a hemorrhage that was a result of complications from cancer.

“We had a lovely relationship, but I developed an intuitive sense because he was a man of so few words,” Jane said. “You had to pay attention and read him, but there was that sweetness there and I could make him laugh. I’ve always felt admired by dad. He never knew what schools [my brother] John and I were in or anything; he really lived in another world.”

“He was a big worrier and I’d say he was a classic clown,” Jane continued. “He was a very serious, sweet hermit who didn’t talk too much. But he did have great instincts and taste and was a reader, despite the fact he had no real education. He would do the New York Times crossword puzzle every week and would read Dickens.”

While Lahr was a man of few words, he did give some no-nonsense advice to his daughter.

“When I was just becoming a teenager and flirting with guys, I was on the phone once and dad overheard me,” she told the outlet. “I was basically jerking these guys around and not treating them respectfully. He came into the room and said, ‘In my neighborhood, if you behaved that way, you’d end up in the East River with your feet in cement.’ Do you think I ever did that again in my life with anybody.”

“But the thing is, he wasn’t tough,” Jane said. “Again, there was a sweetness there. When I was a teenager I blared music in my room. Then, when I went away to college, he would go into my room and put on my records. But he couldn’t say I love you. John and I, between us, received two letters from him our whole life. But I knew he loved me. The very fact that mom said he was going in my room and playing my records said everything.”

Jane also remembered one other moment where her famous father expressed in his own way how much he loved his daughter.

“I went to the Slade School of Fine Art in London,” she said. “And he drove my best friend, my brother, my mother and myself to the airport and he cried all the way there - we were all afraid for our lives. Then my friend afterward called me and said, ‘He cried all the way home, too.’ So he didn’t have to say I love you.”

Bert Lahr (1895-1967) in costume as the cowardly lion in the musical 'The Wizard of Oz', directed by Victor Fleming for MGM. (Photo via John Kobal Foundation/Getty Images)

Lahr, a leading burlesque and vaudevillian star, went on to have success in Broadway musical comedies. However, he’s best remembered for “The Wizard of Oz,” which premiered in 1939.

“You have to remember when they made that movie, they gathered the very best talent in Hollywood at that moment, but my dad and the others were basically middle-aged vaudevillians,” Jane said. “Judy Garland was part of the MGM studio plan and she and Toto made the least making the movie. She was paid $500 a week and Toto made $125 a week. They offered dad three weeks at $2,500, but he insisted on five and it ended up taking 24. In today’s money, he made a million dollars. They all made small fortunes from it.”

Jane said “The Wizard of Oz” made an unmistakable impact on viewers when it first came out.

“When it was released, we were on the cusp of getting into a major world war, and if you ever noticed the Witch’s minions in the movie, the flying monkeys, they remind you of the German planes that were bombing London,” she told the outlet. “And her soldiers, the Winkies, they march like Russians or Nazis. All of a sudden we’re in this land where this darkness is prevalent, like in other movies of the time.”

Today, Jane hopes her father’s accomplishments in Hollywood will continue to touch lives, especially new generations discovering his work for the first time.

Bert Lahr as the Cowardly Lion in a scene from the film 'The Wizard Of Oz', 1939. (Photo by Metro-Goldwyn-Mayer/Getty Images)

She recalled the first time she and her brother visited Lahr’s gravesite in Ridgewood, N.Y., since his death.

“His gravesite is supposed to have perpetual care,” she told the magazine. “Well, I don’t know what they mean by perpetual care, but as we got there we saw there wasn’t a lot of it being done. But on his stone, a child had left a toy lion, and that speaks to me of dad. We fixed up the gravesite, I planted a plant and we moved the little toy lion right up front and left everything in good shape.”

“But that’s when I really think of dad; the thought of that child leaving that lion for him,” she said. “I can see a mother with a little boy, saying, ‘Oh, this is the lion in ‘The Wizard of Oz’ and the toy is left in tribute. It’s so sweet.”