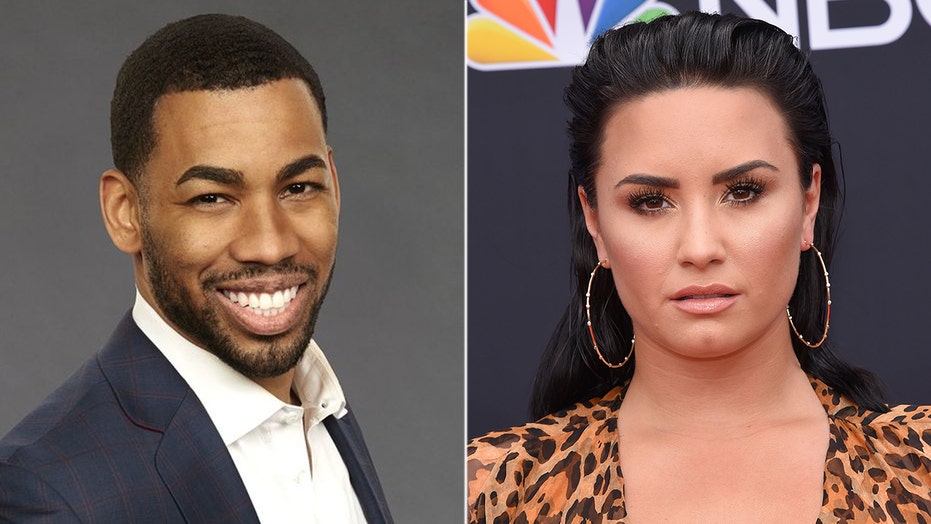 "Bachelorette" star Mike Johnson is spilling the details on his romance with Demi Lovato.

During an interview on iHeart Radio’s "Almost Famous" podcast with hosts -- and "Bachelor Nation" stars -- Ben Higgins and Ashley Iaconetti, Johnson, 31, revealed that he and Lovato, 27, have gone on multiple dates and that she’s a good kisser.

“We’ve gone on more than one date,” Johnson said. “I like her tattoos — we both have a lot of tattoos. Demi has more than me. And, uh, she kisses really well.”

Mike Johnson of "The Bachelorette" has been flirty with Demi Lovato. Insiders claim they've been hanging out privately to get to know one another. (ABC / Getty)

Johnson, who competed during Hannah Brown's season, was also questioned about Demi making the first move (via social media) and stated that he finds it attractive.

“For one, I’m all about her too. She definitely was the aggressor, you know, I find it incredibly sexy. I love that, like, ‘Come at me. You want me, come at me.’ I want you, I’m [going to] come at you. I’m coming at her as well.”

Lovato has been vocal on social media about her crush on the reality TV star and has even flirted with him through Instagram by dropping suggestive comments and likes on his photos.

DEMI LOVATO SLAMS REPORT ON HER BODY: 'I AM MORE THAN MY WEIGHT'

"She considers him “funny [and] smart," the insider added. "He makes her laugh and is respectful of her boundaries. All of these qualities are very important and intriguing to Demi."

In Sunday's interview with Higgins and Iaconetti, Johnson revealed what he thought of Lovato.

“She’s incredibly humble,” Johnson said. “When Demi and I are together, it’s laughter and we talk about real s---. Like, she’s a down-to-earth woman and I respect it so much. And she’s just a really humble, really cool, really fun, down-to-earth person.”

Mike Johnson was a fan favorite from "The Bachelorette" and is rumored to be dating Demi Lovato. (Getty)

When asked about the relationship's status, Johnson kept it cool, saying the “status of the relationship with Demi and I are that we are two people exploring each other.”

After Higgins asked the reality star how he feels about people being invested in his dating life, he admitted that he doesn't like it. "I am very private with my relationships, like, straight up.”

“But I mean, I’m in this [public] eye, she’s been in this light, and that’s why I said she’s so humble, and I think the world of her because like, she’s been able to have to deal with this crap like I can’t even imagine from her perspective,” he continued. “I personally don’t care to talk about, you know, what I do behind closed doors. I’m a gentleman, I’m not going to kiss and tell.”

Johnson also addressed his fears about dating in the public eye.

“It scares me, honestly,” he said. “What scares me about it is that if Demi and I were not to become boyfriend/girlfriend, right, how would people perceive that? Which honestly, I shouldn’t give two s---s about it, right? No disrespect to people that, you know, follow us. But it scares me for that reason.”

“Being quite transparent, she’s a woman that I treat like a regular individual,” Johnson added. “I’m a man that she treats like a regular man. And we do like each other and we are getting to know each other, but what if it were not meant to be?”