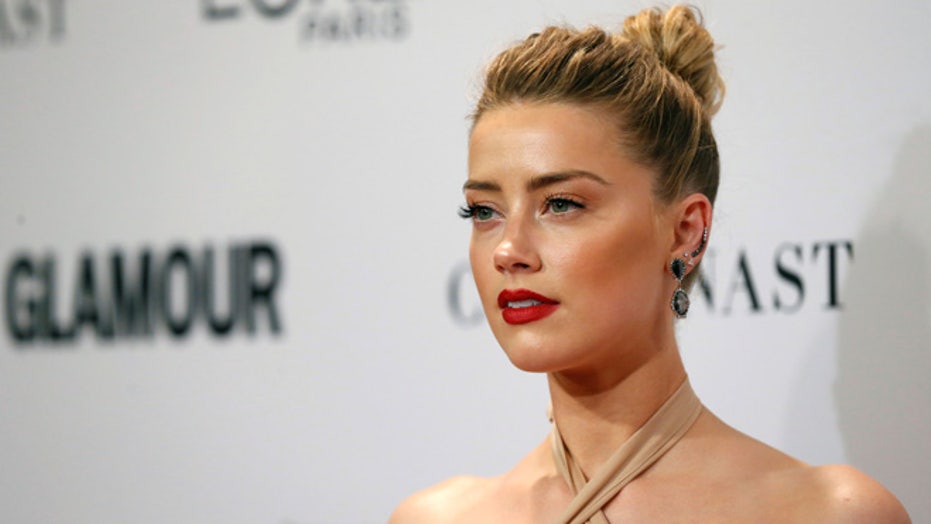 The 33-year-old actress had previously shared an image taken for the September issue of Interview Magazine in which she posed topless in a black blazer. She claimed the post was removed by the social media app because her left nipple was exposed in the shot.

In an act of protest, she posted the same image, only this time she edited in Momoa’s face and chest to the snap. Because male nipples aren’t against Instagram’s guidelines, the post hasn’t been removed.

“In honor of IG’s rigorous and equitable Community Guidelines against showing the Female nipple ..and since mine enjoyed the brief privilege that’s afforded to my male counterparts.. I decided to pay homage by replacing it with a picture that DID meet IG’s strict nudity guidelines and such careful gender policies,” she captioned the photoshopped picture.

The star also shared the original version of each image on her Instagram Stories so that fans could compare them and sound off on Instagram’s policy.

Heard made sure to note in the comments that she doesn’t mean to take a shot at her “Aquaman” co-star.

“BTW, love you AquaHubbs ! Sorry to use your pecs to make a point!” she wrote.

This image released by Warner Bros. Pictures shows Jason Momoa, left, and Amber Heard in a scene from "Aquaman." (AP)

The duo is set to reprise their roles in an upcoming "Aquaman" sequel.

Instagram has caught backlash from female celebrities in the past who have called out its rule allowing male nipples but not female nipples.

Per its Community Guidelines: “We know that there are times when people might want to share nude images that are artistic or creative in nature, but for a variety of reasons, we don’t allow nudity on Instagram. This includes photos, videos, and some digitally-created content that show sexual intercourse, genitals, and close-ups of fully-nude buttocks. It also includes some photos of female nipples, but photos of post-mastectomy scarring and women actively breastfeeding are allowed. Nudity in photos of paintings and sculptures is OK, too.”

Heard is hardly the first star to call out Instagram for its policy on female nipples. In May, Sarah Silverman tested the social media app with a topless photo in her bathroom mirror that had her breasts slightly obscured. Miley Cyrus previously caught heat for her support of the “Free The Nipple” campaign after posting a topless image in 2014. The following year, Chrissy Teigen took the social media app to task after several of her photos were removed.