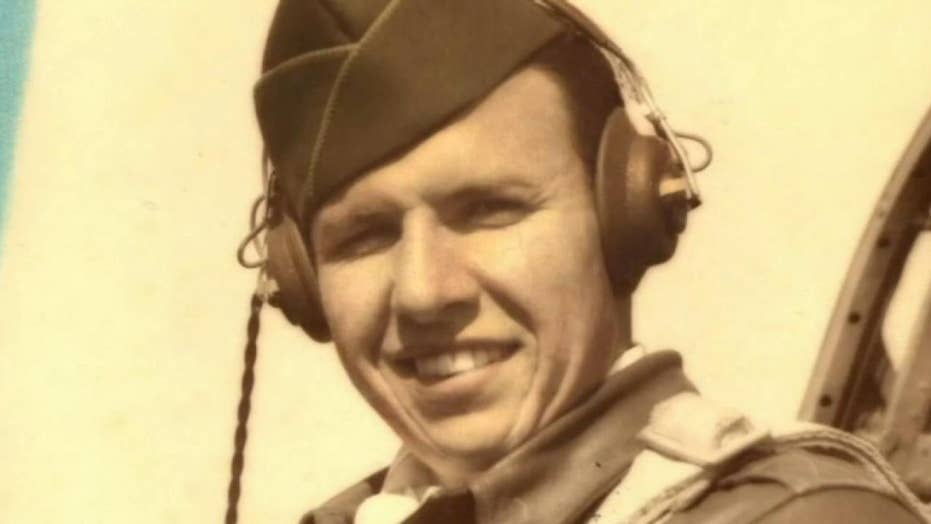 In 1944, 8-year-old Tony Foulds watched an American Air Force bomber crash. When he learned that the crew had saved his life, Foulds made it his mission to see that the 10 airmen were remembered for their heroism.

The aircraft came down on Feb. 22, 1944, as the pilot was apparently maneuvering the plane to avoid a group of children gathered in a park, according to reports.

Thousands of people witnessed the flyover which involved 10 U.S. and British Air Force planes, the BBC reported. Attendees included relatives of some of the aircrew. The flyover concluded with a missing man formation.

Tony Foulds was eight in 1944 when he saw the bomber’s pilot Lt. John Kriegshauser wave his arms, trying to clear the children from the patch of green, Stars & Stripes reported.

Tony Foulds tends to a memorial honouring 10 U.S. airmen who died in a plane crash in Endcliffe Park, Sheffield, England, Wednesday, Feb. 13, 2019. Foulds was just a kid running around in the park on Feb. 22, 1944 when a U.S. Air Force crew decided to crash and die rather than take the chance of hitting them. He's dreamed of honoring them for decades. (AP)

Years later Foulds realized why Krigshauser was waving and that he’d chosen to sacrifice his own crew’s life rather than risk the children’s, the paper reported.

“They could have saved themselves,” Foulds told the Associated Press, according to the paper. “I’ve put myself in their place many a time and thought if I was wanting to land and there were children on, I would think to myself, ‘Well, I’ll land and hope I don’t hit them.’”

The B-17, known as Mi Amigo, was hit by German fire on a bombing run over Demark.

WWII VETERAN HAS ONE WISH FOR HIS BIRTHDAY: 100 CARDS

Foulds, now 82, has tended to a memorial honoring the Mi Amigo crew for decades.

F-15 planes seen from Endcliffe Park in Sheffield, as warplanes from Britain and the United States stage a flyover in tribute to ten dead US airmen. Tony Foulds was just a child playing in the park on Feb. 22, 1944, when a U.S. Air Force crew decided to crash and die rather than take the chance of hitting the playing children. (Danny Lawson/PA via AP)

He long pushed for a flyover to draw attention to the aircrew’s sacrifice.

“That was worth waiting 66 years for,” Foulds said with tears in his eyes.