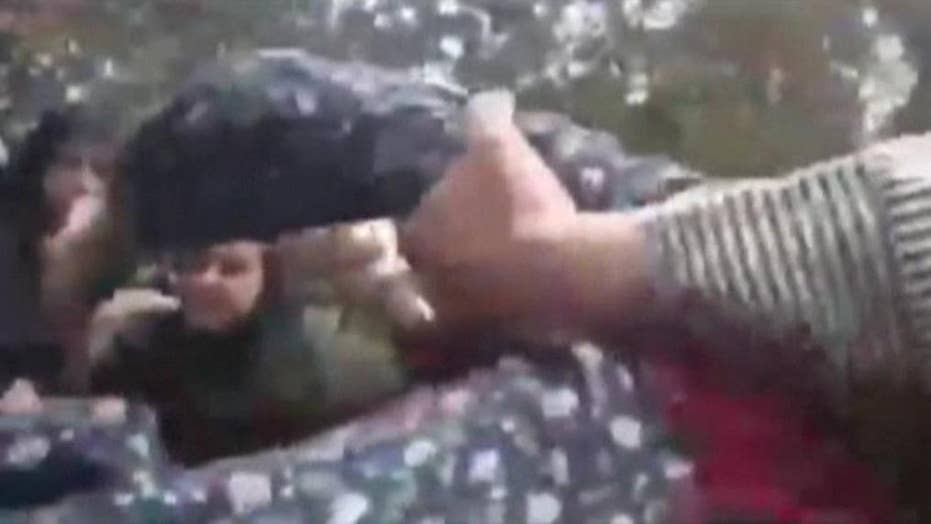 The video, which appeared online last week and has gone viral, showed that the woman’s hair was clearly visible underneath her scarf when she was surrounded by three morality policewomen wearing chadors. One of the officers grabbed the woman by her throat and pushed her to the ground, the video shows.

“Why are you hitting me? You have been destroying us for 30 years,” the woman is heard yelling in Farsi at one point.

A grainy video of female officers from Iran’s morality police assaulting a young woman whose headscarf only loosely covered her hair has sparked a new public debate on the decades-long requirement for women in the Islamic Republic. (AP)

The unidentified woman ends up on the ground, weeping as another woman comforted her before officers grabbed her again.

It’s unclear when or where the video was taken. Activists have suggested it was filmed in Tehran, though there are no hints of where it took place. None of the women in the video have been identified.

The viral video quickly drew outrage in Iran, where some women not only question the rule that they must wear the hijab on the street but also their faith in the theocratic Shiite-dominated nation.

"I think that it was very unnecessary the way that the police, or the morality police, handled the situation," said Hamraz, 27, an Austrian national born to Iranian parents who was on vacation in Tehran. "It was very unfortunate that it was caught on camera, but in a way it was good that everyone got to see how people are being treated – very unjust and very unfair."

The incident has seen women in Iran not only question the rule that they must wear the hijab in the street but also their faith in the theocratic Shiite-dominated nation. (AP)

Iran President Hassan Rouhani, a cleric who is considered a moderate within the country’s political system, weighed in on the incident, criticizing the morality police in a speech on Saturday.

“Grabbing people’s collars to promote virtue will not work,” he warned, referencing the police force’s mandate of “promoting virtue and preventing vice.”

He added: “You cannot do it by being aggressive.”

Even before the 1979 Islamic Revolution, the long, flowing black robes for women known as chadors and the headscarves, or hijabs, were both a political and religious symbol in Iran. They became political symbols in 1936, when Iran's pro-Western ruler Reza Shah Pahlavi banned the garments amid his efforts to rapidly modernize Iran. The ban became a source of humiliation for some pious Muslim women in the country.

The hijab and loose-fitting clothing are mandatory for all women in Iran. (AP)

The hijab and loose-fitting clothing later became mandatory for all women. And though some freedoms for women were curtailed in the years that followed, Iranian women are still allowed to drive, unlike in Saudi Arabia, and hold public office.

Women arrested for showing their hair in public in Iran can receive jail terms of two months or less and face fines equivalent to $25.

An investigation of the incident has been ordered after Masoumeh Ebtekar, a female vice president for women’s affairs, condemned it.

Officials have said the policewoman seen in the video grabbing the young woman’s throat has been suspended pending the investigation.

Hard-liners, however, have dismissed the video as a foreign plot. The hard-line Kayhan daily on Sunday described the video as "strange and suspicious," noting foreign activists have promoted it. Previously, hard-liners pointed to a campaign challenging the hijab launched by a journalist at the Persian service of the Voice of America, which is funded by the U.S. government.