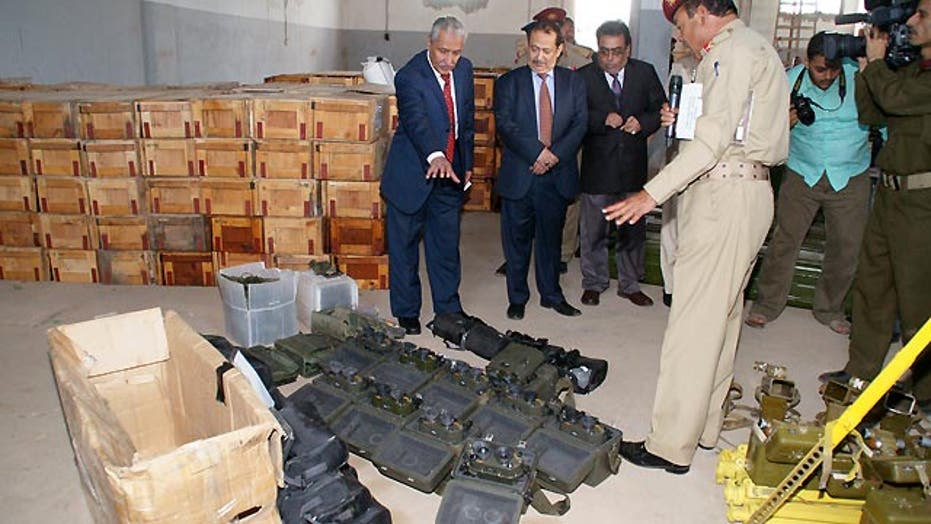 A recent shipment of weapons intercepted in Yemen, including surface-to-air missiles, shows Iran’s determination to further destabilize the region, according to the head of the House Intelligence Committee.

Video of the weapons shipment, posted to YouTube this week by the Yemen Embassy in Washington, D.C., for the first time revealed the scope and sophistication of the weapons intercepted in late January. A Yemeni military source tells Fox News the shipment included circuits, wires and nearly 200 explosive packages for improvised explosive devices, remote detonators, military binocular and what were described as Iranian man-portable, infrared-guided surface-to-air missiles. Known as “Manpads,” the missiles can bring down civilian aircraft.

The weapons -- bound for a Shia insurgent group that has called for an end to the small U.S. military presence in Yemen -- were hidden inside a metal tank on a fishing vessel that was intercepted as part of a joint U.S.-Yemen operation.

At a Jan. 29 briefing, Defense Department spokesman George Little described the operation:“The dhow was observed operating erratically and low in the water and ventured into Yemeni waters, so a routine boarding was conducted. Arms were discovered, and we had crew statements that indicate that the point of origin was Iran.”

Beyond Yemen, a new British report by investigators with Conflict Armament Research concludes Iran has been expanding its footprint in Africa by secretly supplying unmarked ammunition to fuel regional conflicts.

The report, called “The Distribution of Iranian Ammunition in Africa,” describes Iran's role in the Sudan as "sustained and potentially escalating" with large-scale shipments -- as well as technical help to produce weapons.

Separately, Fox News is told that a suspected Israeli air strike on a Sudanese warehouse in October was linked to Iran's weapons smuggling operations. The explosion destroyed some 40 percent of the Yarmouk munitions plant near the capital Khartoum. At the time, Israel did not confirm nor deny a bombing.

While Tehran denies involvement, there is now strong evidence, presented publicly this week, that a July bus bombing in Bulgaria that killed five Israeli tourists was the work of Hezbollah -- one of Iran's proxies. Both Rep. Rogers and outside analysts believe the smuggling of weapons and the uptick in plots linked to Hezbollah also reflect the fact that Iran's longtime partner Syria is under pressure, and the regime may ultimately fall, depriving the Iranians of a key ally.