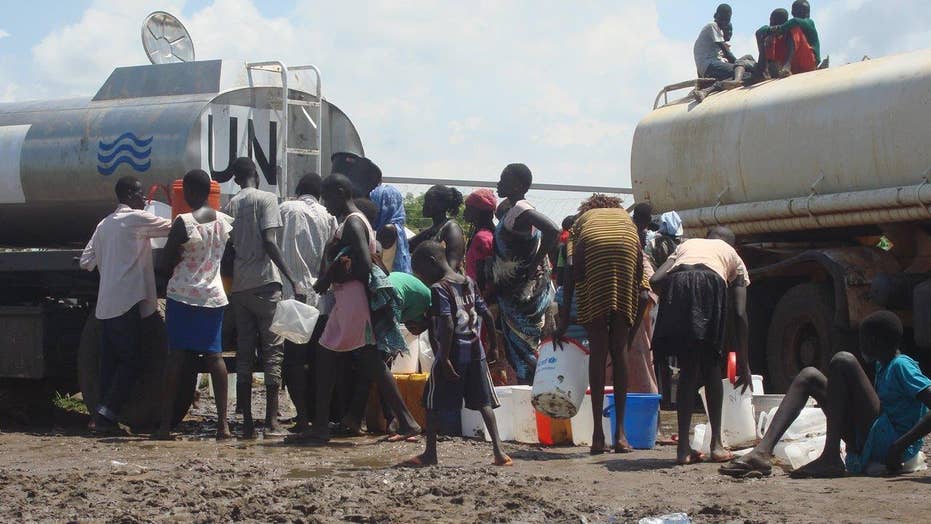 YEI, South Sudan – Infants hacked with machetes. Charred bodies with their arms bound. Women who were gang-raped. Men who were spared death but arbitrarily detained.

These are the tales of horror told in Yei, a formerly peaceful town surrounded by farms in southern South Sudan near its border with Uganda and Congo.

Once a beacon of coexistence, Yei is now a center of the country's renewed civil war, gripped by a wave of killings among South Sudan's dozens of different ethnic groups.

And things could get worse.

"The signs are all there for the spread of this ethnic hatred and targeting of civilians that could evolve into genocide, if something is not done now to stop it," said Adama Dieng, the U.N.'s Special Adviser on the Prevention of Genocide, after visiting Yei last week.

Civilians and local government officials in Yei told The Associated Press of army troops and, to a lesser extent, the rebels terrorizing the population and killing people based on their ethnicity.

"Some leaders will not hide their (loyalty) to their ethnic groups. They cannot hide it. Genocide is not an event that one day comes. It builds and it builds up. The indicators are there," said Jacob Aligo, a minister in the Yei state government.

At night, gunshots echo through the town and soldiers prowl the streets, looting and raping, according to more than a dozen residents and government officials interviewed by the AP.

A woman who identified herself only by her first name of Betty for fear of reprisal said government soldiers knocked on her door one night in mid-October.

"My husband pushed me and my two children under the bed and he opened the door. They demanded money, and he had none, and then they shot my husband," she recalled, saying he bled to death. She said she later visited a friend who had been gang-raped by armed men.

When civil war spread across South Sudan in December 2013 — more than two years after the country gained its independence from Sudan — the town of Yei was spared the violence that arose elsewhere.

The civil war, which killed tens of thousands and displaced more than 2 million people, grew out of a political split between President Salva Kiir and former Vice President Rick Machar. The conflict often pitted Kiir's Dinka tribe against Machar's Nuer community and other minority groups.

Yei became a refuge for all of the country's 64 tribes who wanted to avoid the fighting, and crime was almost nonexistent, residents said. The surrounding area produced food for the entire country and a nearby coffee plantation received support from actor and longtime South Sudan activist George Clooney.

When a peace deal was signed in 2015, it seemed that Yei had avoided bloodshed.

But last summer, after fresh fighting erupted in South Sudan's capital, Juba, between Kiir's army and the rebels under Machar, the renewed civil war came to Yei.

Civilians in Yei began to suffer in August when the army came in to fight nearby rebels, said Gista, a resident who also refused to give her last name out of fear for her safety.

She said government soldiers swarmed a village on Yei's outskirts, where her daughter and son-in-law lived. He apparently didn't hear the soldiers coming, and "when he tried to run, the killers were already there," Gista said. They killed him and her daughter, as well as her 4-year-old granddaughter, and hacked a 4-month-old granddaughter with a machete, she said. The infant survived after being hospitalized, she added.

The military, which residents and local government officials say are from the Dinka tribe, attacked other tribes who are natives of Yei and surrounding Equatoria state on suspicion they supported the rebels, the locals said.

A militia called Mathiang Anyoor, which is allied to Kiir and Army Chief of Staff Paul Malong and is Dinka, also terrorized civilians, according to residents, local officials and U.N. officials.

Residents are restricted from moving 3 kilometers (2 miles) from the center of town in all but one direction. Surrounding areas have been declared off limits by the military. When the AP traveled in a government convoy in those "no-go" areas, they were deserted, with fields lying fallow and empty houses and shops boarded up.

Santo Domic Chol, a spokesman for the South Sudan army, or SPLA, said the allegations of soldiers targeting civilians were "baseless," and part of a propaganda campaign influenced by the rebels.

In early November, 11 people traveling from Yei were rounded up by unidentified individuals, placed in a thatched hut, and burned alive, local government officials said. Their charred corpses were still there in mid-November when AP counted seven bodies, some with their arms bound behind their backs.

"We are living in crazy times," said Athanasio Yongule, minister for Local Government and Law Enforcement. Like other local officials, Yongule said South Sudan's army does not answer to them.

Since July, hate speech has been on the rise in the region on social media, according to Stephen Ladu, the acting governor of Yei River State.

"We can see that the boys in the bushes will be writing on the social media that they will come and attack this community," Ladu said.

Letters sent to humanitarian groups and seen by the AP have threatened to kill civilians from Equatoria state who live elsewhere in South Sudan. Ladu and other local officials want U.N. to send peacekeepers to Yei to protect civilians.

Nearly 150,000 people have fled to Uganda from the Yei region since July, and 120,000 have moved elsewhere in South Sudan, according to estimates from the South Sudan Protection Cluster.

The U.N. refugee agency said in September that about 100,000 people are "trapped" in Yei by "military operations," and it is distributing items like soap and blankets.

Many civilians are gripped by hunger in a region that once was South Sudan's breadbasket. About 40 percent of the area's population faces food insecurity, according to internal U.N. estimates obtained by the AP.

Because of the conflict, they don't have access to their farms, said Richard Ruati an assistant external relations officer for U.N. refugee agency in Yei.

Civilians "are bearing the brunt of both sides, and they don't know where to turn to," he said.

Dieng, the U.N. adviser on genocide, painted a harrowing picture of his visit to Yei as he left South Sudan last week, recounting stories of "targeted killings, assault, maiming, mutilation, rape, and the barbarous use of machetes to hack families to death." He said: "Yei is one urgent example among many."

"There is a very real risk of mass atrocities being committed in South Sudan, in particular following the sharp rise in hate speech and ethnic incitement in recent weeks," Ban said in a report to the Security Council. But he added that U.N. peacekeeping operations don't have the "appropriate reach, manpower or capabilities to stop mass atrocities."