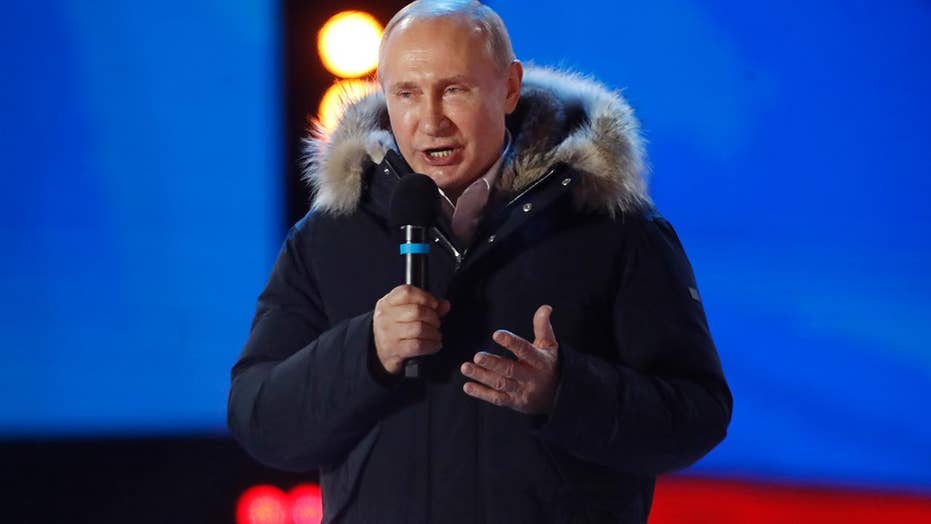 Russian President Vladimir Putin won re-election with more than 75 percent of the vote Sunday, according to exit poll data.

The Russian strongman's election win keeps him as Russia's leader for another six years and allows him to claim the mantle of the vast country's longest-serving ruler other than Joseph Stalin.

Speaking to a crowd who attended a pop concert near the Kremlin marking his victory, Putin hailed those who voted for him as a "big national team," adding that "we are bound for success." He said that the nation needed unity to move forward and urged the audience to "think about the future of our great motherland." He then led the enthusiastic crowd to chant "Russia!"

Results from more than half of precincts showed Putin winning over 75 percent of the vote, with Communist candidate Pavel Grudinin and ultranationalist Vladimir Zhirinovsky trailing far behind with about 13 and 6 percent, respectively.

The eight presidential candidates were barred from campaigning Saturday, but the message to voters was clear from billboards celebrating Russian greatness — a big theme of Putin's leadership — and Kremlin-friendly media coverage.

TRUMP AND THE RUSSIA PROBE: WHAT TO KNOW

The last time Putin faced voters was in 2012, when he was up against a serious opposition movement. But since then he has boosted his popularity thanks to Russian actions in Ukraine and Syria.

Yevgeny Roizman, the mayor of Yekaterinburg, Russia's fourth-largest city, says local officials and state employees have all received orders "from higher up" to make sure the presidential vote turnout is more than 60 percent.

"They are using everything: schools, kindergartens, hospitals — the battle for the turnout is unprecedented," said Roizman, one of the rare opposition politicians to hold a significant elected office.

Communist party candidate Pavel Grudinin prepares to cast his ballot in the presidential election at the Lenin state farm outside Moscow, March 18, 2018. (AP)

A doctor at one of the city's hospitals told The Associated Press how one kind of voting pressure works.

The doctor, who gave her name only as Yekaterina because of fears about repercussions, said she and her co-workers were told to fill out forms detailing not only where they would cast their ballots, but also told to give the names and details of two "allies" whom they promise to persuade to go vote.

"It's not something you can argue about," she said at a cafe Saturday. "People were indignant at first, said 'They're violating our rights' ... but what can you do?"

Yekaterina said she isn't sure what she'll do with her ballot, musing that "maybe I'll just write 'Putin is a moron.'" But she clearly understands that not showing up at the polling place Sunday will not only endanger her job, but will reflect badly on her boss, whom she likes.

The Russian doctor said she wouldn't go to vote if she wasn't forced to.

"What's the point? We already know the outcome. This is just a circus show," she said.

More than 1,500 international observers joined thousands of Russian observers to watch the vote. A Russian election monitoring group said Saturday it registered an "alarming" rise in recent days in complaints that employers were forcing or pressuring workers to vote.

Russians vote during the presidential election on March 18, 2018. (AP)

Election observers and local media have reported threats and coercion of voters to re-register at their place of work and report later that they have voted.

Ella Pamfilova, chairwoman of the Central Election Commission who was appointed to clean up Russia's electoral system, vowed to respond to complaints about being coerced to vote.

"No manager has the right to tell them where to vote," she said recently.

Putin's main foe, opposition leader Alexei Navalny, was barred from the race because of a criminal conviction widely seen as politically motivated. Navalny has called for a boycott of the vote.

"What's the point? We already know the outcome. This is just a circus show," she said.