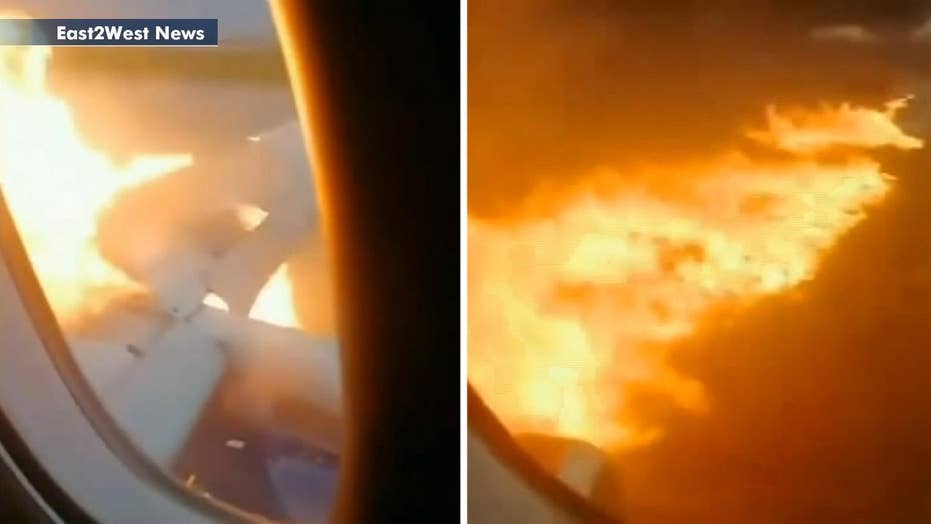 Raw video: Passengers scream in horror inside plane crash landing in Moscow that killed at least 41 people on board.

Video has emerged showing the moment a Russian airliner caught fire while making an emergency landing at Sheremetyevo Airport in Moscow. The crash on Sunday left 41 people dead.

Footage taken by a passenger in a window seat shows the plane's wing being engulfed in flames as others onboard cry and scream. A shuffle ensues toward the end of the video, as seatbelt signals can be heard coming on and off, and the person behind the camera appears to move.

The plane, an Aeroflot SSJ100, was carrying 73 passengers and five crew members when it was forced to turn around shortly after taking off from Moscow. It had been bound for the northern city of Murmansk. Of the 78 total people on board, 37 survived, largely due to the heroic efforts of the crew on board who rushed to evacuate passengers, officials say.

Among the dead was flight attendant Maxim Moiseev, Russian Transport Minister Yevgeny Dietrich said on Monday. Moiseev reportedly stayed aboard the plane as it burst into flames, helping passengers escape, when he perished.

Another flight attendant, Tatyana Kasatkina, said she began grabbing passengers by their collars and throwing them down escape chutes to safety.

"People starting getting out of their seats and making for the exit while the jet was still traveling at high speed," she told Lenta news agency. "They were phoning relatives, screaming that the plane was burning and falling."

Some had just seconds to get out of the plane before succumbing to the fire. It is thought that the majority of those who died were choked by the smoke, according to TASS.

An investigation is now being launched into what caused the need for an emergency landing, and the subsequent fire. Three factors are believed to have contributed to the fatal event: insufficient piloting qualifications, equipment failure and inclement weather.

The flight's pilot, Denis Evdokimov, told Russian media that a lightning strike caused by a storm at takeoff caused the plane to lose radio communications.

Fox News' Travis Fedschun contributed to the reporting of this story.