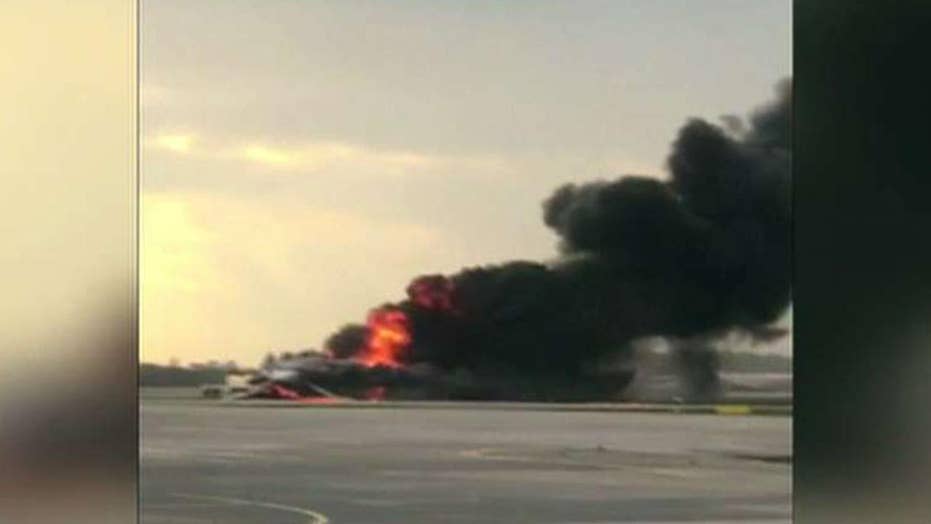 At least 40 people were killed Sunday after a Russian airliner made a hard emergency landing and caught fire at Moscow's Sheremetyevo Airport, officials said.

Russia's Investigative Committee spokeswoman Elena Markovskaya told a news conference late Sunday that 41 people had died and 37 others had survived. However, Russian Health Minister said that 38 people had survived without giving a death toll. The discrepancy could not immediately be reconciled.

The victims included one member of the crew and at least two teenagers, according to the Investigative Committee.

Aeroflot flight SU1492, a Sukhoi SSJ-100 regional jet, had taken off for the northern city of Murmansk before it was forced to turn around with 73 passengers and five crew members on board, airport officials said. The airport statement said the plane's hard landing started the fire.

Aeroflot said in a brief statement that technical problems forced the jet to turn around, but did not elaborate.

This image taken from video provided by Instagram user @artempetrovich, shows an Aeroflot Airlines flight on fire during an emergency landing in Sheremetyevo airport in Moscow, Russia. (@artempetrovich via AP)

Some news reports cited sources as saying the plane bounced several times during the landing. The plane apparently did not have time to jettison fuel before the emergency landing, news reports said.

"Investigators soon will begin interviewing victims, eyewitnesses, airport staff and the airline carrier, as well as other persons responsible for the operation of the aircraft," Investigative Committee spokeswoman Svetlana Petrenko said.

Videos and pictures posted to Twitter showed the jet landing at Sheremetyevo Airport with large flames engulfing the rear section.

One video showed a massive amount of flames coming from what appeared to be the engine as the plane touched down on a runway.

Video aired by Russian news channel Rossiya-24 showed passengers leaping from the front of the burning aircraft onto an inflatable slide and staggering across the tarmac and adjoining grass.

A law enforcement source told the Interfax news agency that the plane gave a distress signal after departure, then tried to make an emergency landing. After a first attempt failed, the aircraft was able to make a landing on the second try.

The incident caused at least 53 flights to be delayed and one canceled, according to Interfax. Airport officials told the news agency that the airport was operating "in a limited mode with one runway."

The SSJ100, also known as the Superjet, is a two-engine regional jet put into service in 2011 with considerable fanfare as a signal that Russia's troubled aerospace industry was on the rise. However, the plane's reputation was troubled after defects were found in some horizontal stabilizers.

The plane's manufacturer, Sukhoi Civil Aircraft, said the plane in Sunday's accident had received maintenance at the beginning of April. Aeroflot said the pilot had some 1,400 hours of experience flying the plane.

The plane is largely used in Russia as a replacement for outdated Soviet-era aircraft but also is used by airlines in other countries, including Armenia and Mexico.

This is the second deadly incident involving the plane. In 2012, a demonstration flight in Indonesia struck a mountain, killing all 45 aboard.