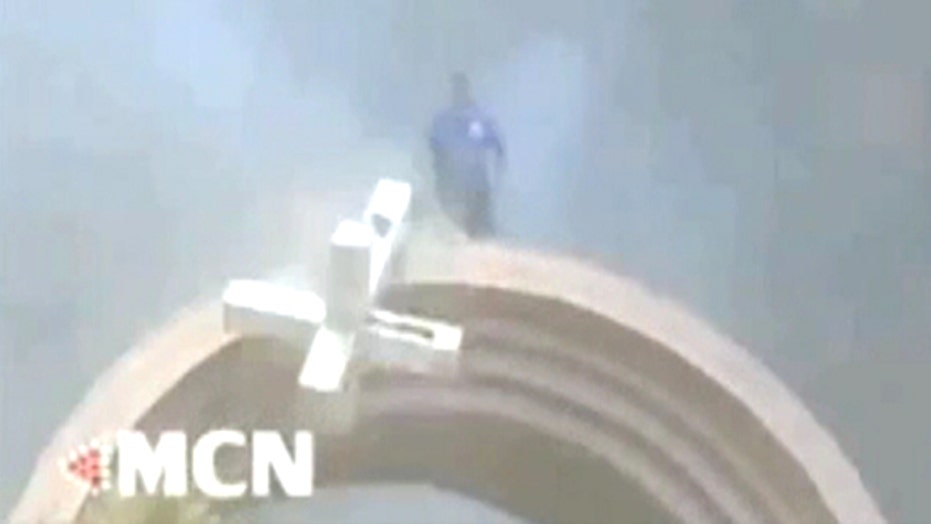 Newly-surfaced video from Egypt shows a Muslim mob storming a Coptic church, setting cars on fire and then toppling a cross atop the steeple, in a shocking attack that Christians say has been played out dozens of times since the ouster of Mohammad Morsi.

The video, obtained by MidEast Christian News, was shot Aug. 14 from a nearby building overlooking the diocese in the southern Egyptian city of Sohag. In the six-minute video, a crowd, incensed by the eviction of pro-Morsi supporters from camps in Cairo, masses outside the church. Several members of the group scale a wall and attack vehicles in a courtyard, setting several ablaze. The video culminates in the crown exhorting a man high up on the steeple to take down a cross, which he does.

Dozens of Coptic churches were attacked by members and supporters of the Muslim Brotherhood in the wake of the military’s move against Morsi, who critics say was turning Egypt into an Islamist state. Christians make up about 10 percent of Egypt’s population of 80 million, but Morsi supporters blamed them for his ouster, according to Coptic leaders.

Bishop Makarious, a Coptic leader from Minya, accused Muslim Brotherhood leaders of planning attacks on Christian churches, homes and businesses in an effort to divide the embattled nation.

“We were expecting this scenario weeks before sit-ins were broken up; as it was evident of the incitement being made by Brotherhood leaders against Copts,” Makarious told MidEast Christian News. “We were then surprised by the systematic attacks on churches and Copts’ properties, many of them occurring at the same time in different places, in a series of attacks made under a plan they called ‘Plan B’”, which targeted all churches to be burned and destroyed.”

The provisional military government has pledged to rebuild Christian churches destroyed by mobs.