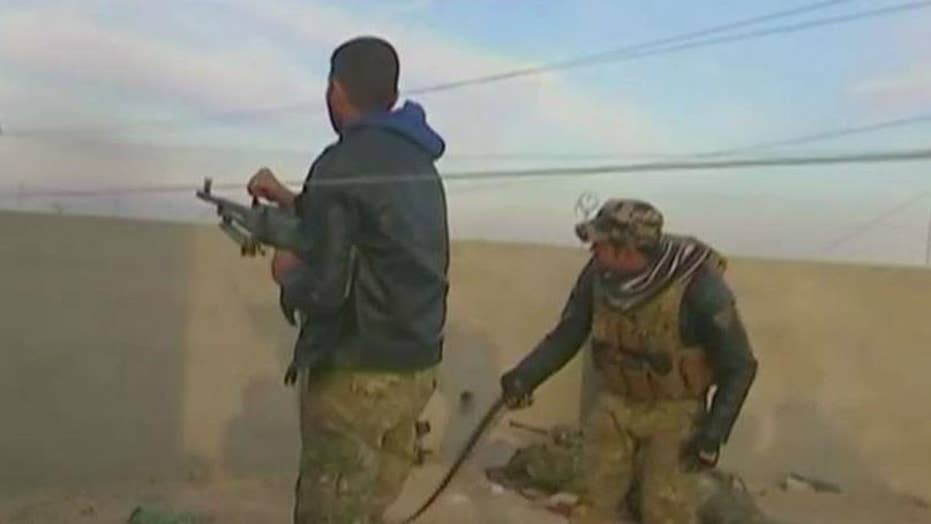 Push to retake the last major ISIS stronghold in Iraq

IRBIL, Iraq – A senior U.S. military commander in Iraq on Sunday gave a vote of confidence to Iraqi forces fighting to recapture the northern city of Mosul from Islamic State militants, saying they were currently "at their peak" and adjusting well to changing realities on the battlefield.

Speaking to The Associated Press in an interview, Brig. Gen. Rick Uribe said he agrees with the forecast given by Iraqi Prime Minister Haider al-Abadi that it would take another three months to liberate Mosul, the last Iraqi urban center still in the hands of the extremist group.

"I think that sounds reasonable that we could potentially have a liberated Mosul in about that time period," Uribe said, dismissing the notion that Iraqi forces are behind schedule.

"We are on pretty close to where we want to be," said Uribe, explaining that military planners knew that while the initial push toward the city would be quick, progress would become "significantly" slower on the city's fringes.

Uribe, speaking in Irbil, capital of the self-ruled Kurdish region in northern Iraq, said Iraqi forces north and south of Mosul have made progress since a new offensive was launched last week after a two-week lull in fighting.

A government campaign to liberate Mosul and surrounding areas in Nineveh province began in mid-October. However, more than two months later, the only major fighting inside the city has been done by elite Counterterrorism Forces, also known as the "Golden Division."

Since the new offensive began, the special forces have pushed forward in at least two neighborhoods in the city's eastern sector, while the army's 9th and 16th Divisions also made headway south and north of the capital respectively. The 9th Division was joined by units of the militarized Federal Police, while the 16th was bolstered by army units.

"I think the forces right now, the Iraqi security forces, as we sit here today on January 1, 2017 are at their peak and I think they will continue to improve because of the lessons they are learning on a daily basis," said Uribe, whose official title is Deputy Commanding General - Baghdad of the Combined Joint Forces Land Component Command.

Uribe said Iraqi forces, backed by a U.S.-led coalition, would face a different fight when they cross to the west bank of the Tigris River, saying it will mostly be a "dismounted" battle fought in part on narrow streets, some of which were not wide enough for a vehicle to pass.

"It will be a different fight and they will adjust as they go from the east to the west. They are already planning these adjustments," he said.

He praised Iraqi security forces for what he said going out of their way in Mosul to protect civilians. "They have been extremely good at taking care of those civilians. I don't know whether you would have seen this a few years ago," he said. "That was part of the training (by the coalition). You got to treat people with dignity and respect. You cannot go into a city and make it worse than before."

Iraqi authorities have advised the estimated one million civilians believed to be still inside Mosul to stay in their homes until the city is fully liberated, but fears of getting caught in the crossfire between government forces and the militants have forced at least 120,000 residents to flee so far. Many are also leaving the city because they had run out of food and money, or due to a lack of essential services like water and power.