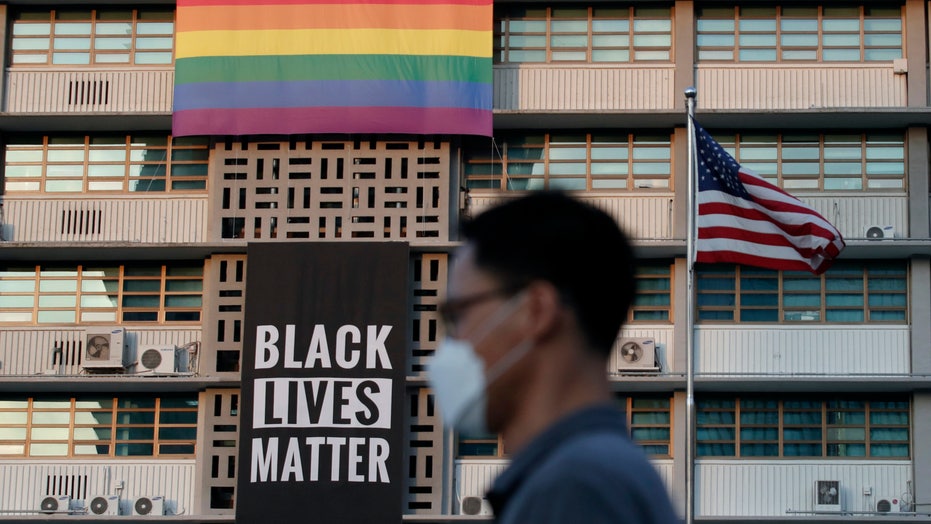 Global communities gather in solidarity with US protests

The U.S. Embassy in Seoul has expressed its support for the Black Lives Matter movement by hanging a huge banner outside its building bearing the same message.

Following the death of George Floyd while in police custody, protests broke out across America and have spread to all parts of the world.

People kneel to protest during a solidarity rally for the death of George Floyd in Seoul, South Korea, Saturday, June 6, 2020. Floyd died after being restrained by Minneapolis police officers on May 25.(AP Photo/Ahn Young-joon)

In South Korea, citizens have also voiced support for the anti-racism and police reform movement, showing up in demonstrations over the past week with signs saying “May George Floyd Rest in Peace” and “Koreans for Black Lives Matter.”

People march to protest during a solidarity rally for the death of George Floyd in Seoul, South Korea, Saturday, June 6, 2020. Floyd died after being restrained by Minneapolis police officers on May 25.(AP Photo/Ahn Young-joon)

The U.S. Embassy has now added its support with the banner, which says simply “Black Lives Matter,” and a tweet explaining its stance.

“The U.S. Embassy stands in solidarity with fellow Americans grieving and peacefully protesting to demand positive change. Our #BlackLivesMatter banner shows our support for the fight against racial injustice and police brutality as we strive to be a more inclusive & just society,” the embassy tweeted on Saturday, along with the picture of the banner in black and white.

U.S. Ambassador to South Korea Harry Harris retweeted the message, adding a quote by President John F. Kennedy. He also said: “USA is a free and diverse nation... from that diversity we gain our strength.”

According to Reuters, the embassy has previously shown support for social movements, last year hanging a rainbow banner in support of the LGBTQ community. The same flag is currently hanging abovr the Black Lives Matter banner.