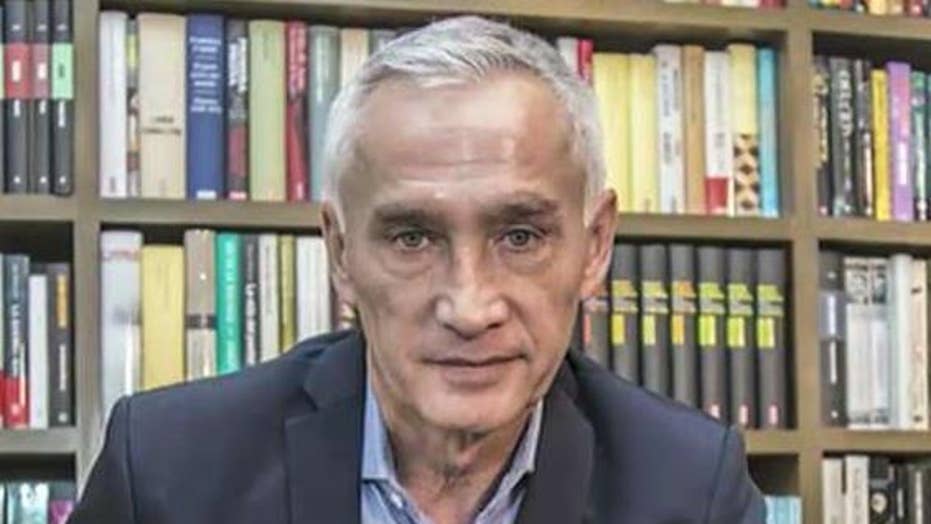 Jorge Ramos, the star anchor of the Spanish-language television network Univision, has described in detail how his tough interview with Venezuela's disputed president Nicolas Maduro landed him in detention.

In a video posted on the Facebook page of his web program, "Real American with Jorge Ramos," the anchor, who was released after two hours, said Maduro was upset with questions about fraudulent elections, harassment and violence against peaceful protesters. He was also asked whether his title should really be "dictator".

Ramos, often gulping and looking away from what Univision later said was a borrowed cell phone at the Caracas hotel where he'd returned after his release, said the last straw for Maduro was when the Mexican-American journalist held up his iPad and showed him footage he had filmed himself of three children on the streets of Venezuela rummaging through the back of a garbage truck for scraps of food.

After looking at the video of the hungry children, Ramos said, Maduro lost it.

“He just couldn’t stand it,” Ramos said. “He didn’t want to continue the interview. He tried to close my iPad.”

“They confiscated all of our cameras, all our videos.”

Ramos said he and a producer, Maria Guzman, were taken to a security room, where agents demanded their cell phones.

Ramos said he refused to give up his phone. At that point, someone turned out the lights in the room and several agents grabbed Ramos’s backpack and his cell phone, he said.

“They forced us to give them our passcodes for our cell phones,” Ramos said.

“We didn’t know what was going to happen to us, or what was happening with the rest” of the news crew.

Ramos and the crew were released after two hours of being kept in the presidential palace, he said.

Ramos said their cell phones and other equipment were not returned, and he doubted they ever would be.

“They don’t want the world to see” the interview or what they filmed during their reporting, he said.

Ramos is known for his provocative style, and he embraces his reputation of activist-journalist.

He was banned from Cuba and has received death threats throughout his career after asking various heads of state about corruption in their government and human rights violations.

In a 2015 New Yorker Magazine profile, Ramos said: “For certain interviews, I see it the same way. My only weapon is the question. And, living here, it’s not risky. I can make powerful people angry, and show our audience what they really are, and then go home and live a normal life.”

Venezuelan officials blamed Ramos for the treatment he received, according to the New York Times.

“We don’t lend ourselves to cheap shows,” said Jorge Rodriguez, the Maduro administration’s press liaison. "Hundreds of journalists have come through who received decent treatment that we always give to those who do journalistic work.”

After his release, Ramos assailed the Venezuelan government’s treatment of him and his crew as iron-fisted.

"This is a violation of freedom of expression and a violation of human rights, a violation of all the principles of journalism,” Ramos said on Univision. “They think the interview is theirs, and not ours. They are stealing our work.”

Univision reported that government agents kept Ramos and the crew under surveillance after their release from the presidential palace.

He was scheduled to leave Venezuela on Tuesday.

The incident was just the latest of many efforts, put into motion by Maduro's predecessor, Hugo Chavez, by the Venezuelan government to censor journalists.

Just weeks ago, on January 23, Venezuelan authorities raided at least three newsrooms in southern Venezuela, taking a TV station off the air and detaining reporters. One of the news stations posted a video on Instagram showing broken and tossed equipment in its offices and studio and condemning government authorities for ransacking the work space.

The government also has disrupted access to the Internet. Hugo Chavez shuttered many independent news outlets and expanded state control of others.

The Committee to Protect Journalists recently posted a warning for journalists working, or planning to work, in Venezuela. CPJ noted that journalist covering Juan Gauido -- who is president of the National Assembly and has been recognized by the U.S. and numerous other countries as Venezuela's interim president -- run particular risks.

"For local journalists, the main risks are potential for physical harm while covering protests, as well as detention or prosecution at the hands of state security forces and authorities...Military intelligence agents have detained journalists who were covering Guaidó, and intelligence agents have raided or shut down several media outlets reporting on the crisis," CPJ said. "Journalists or outlets could face prosecution for covering political events, as reporting on the parallel interim government could be considered illegal under legislation enacted by Maduro and his predecessor."