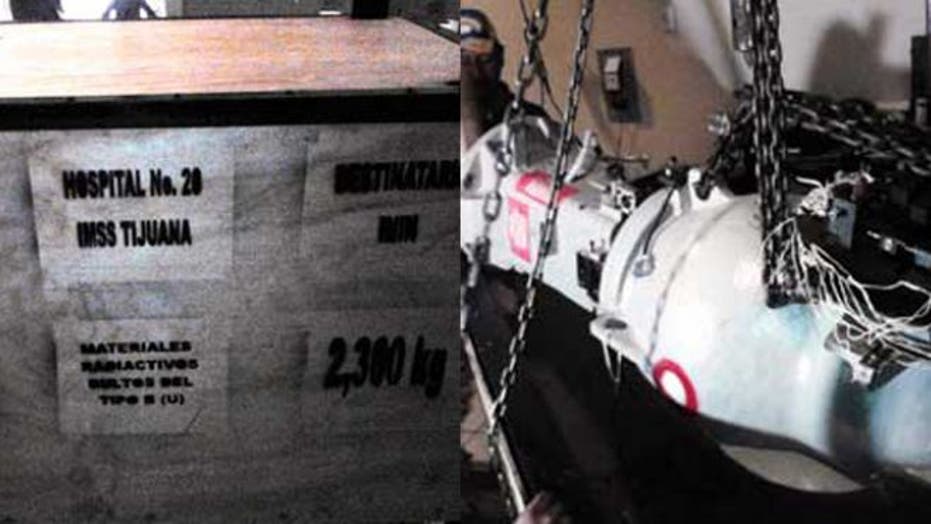 The U.N. nuclear agency says a truck carrying an extremely dangerous radioactive substance has been stolen in Mexico.

The U.N. nuclear agency warned that a truck carrying a potentially "extremely dangerous" radioactive substance has been stolen in Mexico and its load could be used to build a so-called dirty bomb, a weapon that combines radioactive material with conventional explosives.

The International Atomic Energy Agency said the truck was carrying cobalt-60, which is used for radiotherapy treatment to combat cancer. An agency statement Wednesday said the truck was stolen Monday while taking the material to a radioactive waste storage center from the northern city of Tijuana.

The atomic agency said the heist occurred in Tepojaco, a town less than 40 miles outside of Mexico City, describing the load as "extremely dangerous" if damaged or removed from its protective shielding.

The agency statement said that Mexican authorities are searching for the material.

Cobalt 60 is described as hard, brittle, gray metal with a bluish tint and is commonly used in radiation therapy and food irradiation but it is also considered one of the most likely materials for use in a "dirty bomb."

Security officials and the IAEA have long worried about the possibility of a home-made "dirty bomb" loaded with radioactive materials that can kill people over a wide area.

The IAEA has confirmed 2,331 incidents of the illicit trafficking of nuclear material between January 1993 to December 2012.

Mexico's Nuclear agency, the National Commission of Nuclear Safety and Safeguards, released photos of the wooden container with steel reinforcement carrying the medical equipment with  radioactive material inside it.

The truck is described as a white Volkswagen Worker Truck, with license plate 726-DT-8, equipped with a loading platform and integrated crane.

According to the U.S. Environmental Protection Agency, the radioactive element is used to treat inoperable deformities of blood vessels and brain tumor and it is also used for industrial radiography, similar to an x-ray, the process detects structural flaws in metal parts.

The radioactive element also poses a major threat to the environment, particularly the scrap industry, especially if the Cobalt 60 finds its way into municipal landfills.

The radioactive metal source and equipment can get mixed in with scrap metal, or melted in a mill contaminating an entire facility costing millions of dollars in cleanup and lost productivity.