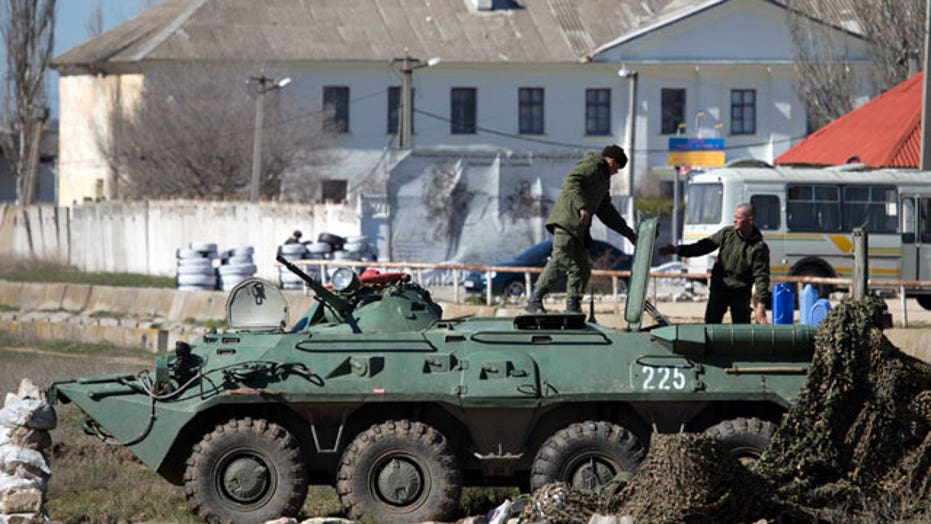 Will Ukraine crisis continue to escalate?

Ukraine's interim authorities accused the country's ousted president of ordering snipers to open fire on protesters and getting help from Russian security agents to battle his own people -- but their report Thursday provided no evidence directly linking him to the bloodbath in Kiev.

Acting Interior Minister Arsen Avakov also charged that his predecessor employed gangs of killers, kidnappers and thugs to terrorize and undermine the opposition during Ukraine's tumultuous winter of discontent.

The preliminary findings revealed by Kiev's new leadership examined the months of anti-government protests that culminated in the deaths in February over 100 people in Kiev, mostly protesters. That violence forced a truce between the opposition and the government, but the arrangement quickly collapsed and President Viktor Yanukovych fled to Russia.

In the weeks since the bloodshed, Russia seized and then formally annexed Crimea, Ukraine's strategic Black Sea peninsula, and the U.S. and the European Union slapped sanctions on those responsible, mainly Russian President Vladimir Putin's inner circle.

Also Thursday, Ukraine sent 16 senior officers to Bulgaria to join a NATO military exercise in a very public demonstration of cooperation between the alliance and the crisis-torn former Soviet republic. The computer-simulation drills involved over 700 troops from 13 NATO members and partner nations and were being held just a few hundred miles away from Crimea.

The crisis now gripping Ukraine has its roots in three days of bloodshed that peaked on Feb. 20.

Speaking at a televised press conference in Kiev, Avakov said police snipers at the time shot at demonstrators near the city's central square, known as the Maidan, as they walked toward the government district. He said 17 people were killed by government snipers positioned at the October Palace cultural center and that one government sniper alone killed as many as eight people.

"The previous leadership of the Interior Ministry and the Berkut (riot police) did everything possible to ensure that any investigations would be impossible. Clothes were burned, weapons discarded and documents destroyed," Avakov said.

"What was planned under the guise of an anti-terrorist operation, and which was in fact an operation of mass killing of people, took place under the immediate and direct leadership of former president Yanukovych," Nalyvaichenko said.

He did not elaborate on where he got his information, whether it was from witnesses, government documents, airline records or other sources.

Nalyvaichenko also said there was evidence that Russia's FSB security service assisted its Ukrainian counterparts' attempts to suppress the anti-government protests. He said FSB members were deployed at a Ukrainian security facility -- 26 in December and six in January -- and that they took part in planning and implementing anti-protest measures. He said the Russians even interrogated the Ukrainian security chief.

Nalyvaichenko contended that in late January, when peaceful protests turned into bloody street clashes with police, Russia sent planes to Kiev carrying massive amounts of explosive devices, arms and crowd control devices "to organize executions and the extermination of our protesters on the Maidan."

Russia's FSB, the successor agency to the KGB, swiftly dismissed the claims, telling the state news agency RIA Novosti on Thursday that the allegations should "rest on the conscience of the Ukrainian Security Service."

The identity of the snipers believed to be responsible for most of the deaths is the subject of bitter disagreement.

Opponents of Ukraine's current leadership disagree fervently with suggestions that only police were to blame and suggest some snipers were organized by opposition leaders trying to whip up outrage.

The new health minister, Oleh Musiy, who previously served as the protesters' top medic, has said he treated both protesters and riot police with similar types of sniper wounds.

The speakers at Thursday's presentation skirted a question on whether any snipers were also shooting at police. Avakov said establishing who was responsible for the deaths of law enforcement officers would be part of the broad investigation that is still ongoing.

Avakov also detailed what he described as overwhelming evidence linking former Interior Minister Vitali Zakharchenko, who was in charge of police during the protests, to a person coordinating hired thugs who beat and intimidated opposition activists.

Avakov said another underworld figure operating under Yanukovych's and Zakharchenko's patronage ran a group of 10 people carrying out beatings and kidnappings of protest organizers, including the kidnapping of a prominent activist, and his colleague, who was killed in the attack.

In his interview with the AP, Yanukovych said Wednesday that he "was wrong" in inviting Russian troops into Crimea, which was swiftly annexed by Moscow following a referendum in which the vast majority of residents backed a reunion with Russia.

Ukraine's fledging government and Western leaders have since expressed concern about a recent buildup of Russian forces near the Ukrainian border. On Thursday, the European Aviation Safety Agency advised planes to avoid the airspace over Crimea because of possible risks posed by two countries seeking to control the sky in the region.

U.S. Air Force Gen. Philip M. Breedlove, who commands all NATO forces in Europe, said Russia has 40,000 troops along the border with neighboring Ukraine and that they are capable of attacking by land and air on 12 hours' notice.

The sheer size and posture of Russia's forces are destabilizing, although the Russians' plans remain unknown to NATO, Breedlove said.

The Russian force is capable of pushing all the way to the Ukrainian port of Odessa or the breakaway ethnic Russian enclave of Trans-Dniester in Moldova, he said. Alternatively, the Russians could open a "land bridge" through Ukrainian territory to the south, toward Crimea, he said.

Putin says the troops are there for military exercises. Russian Foreign Minister Sergey Lavrov told reporters Thursday that the Russian troops will be returning to "their permanent quarters as soon as other participants of the exercise have completed their tasks."

Lavrov added that Russia did not violate any international law by sending additional troops to its own border.

Meanwhile, a state-controlled Russian TV station said Thursday that 25 Ukrainian citizens had been arrested in Russia by the country's security agency on suspicion of planning sabotage. It reported some of them had instructions to take pictures of Russian military movements along the border with Ukraine.