U.K. Foreign Secretary Dominic Raab sparked controversy on Thursday when he said that taking a knee was a “symbol of subjugation,” and that he only takes a knee for Queen Elizabeth II and his wife when he asked her to marry him.

“I’ve got say, on this take the knee thing – which, I don’t know, maybe it’s got a broader history but it seems to be taken from the 'Game of Thrones' – feels to me like a symbol of subjugation and subordination, rather than one of liberation and emancipation,” he said on TalkRADIO. “But I understand people feel differently about it, so it’s a matter of personal choice.”

He was speaking after Premier League soccer players took a knee ahead of fixtures in Manchester and Birmingham on Wednesday evening in solidarity with the Black Lives Matter movement.

Kneeling at a sports event as part of a protest against racism was popularized by former NFL athlete Colin Kaepernick in 2016, who controversially knelt during the national anthem. The move has again become popular in the wake of the death of George Floyd -- with protesters and politicians kneeling to show their support of the protests.

Raab referred to "Game of Thrones," the popular HBO TV show, where characters “bend the knee” to pledge allegiance to a leader of a house or army. While the TV show predates Kaepernick’s protest, there is no indication he took his inspiration from it -- and taking a knee or genuflecting has a number of meanings going back centuries.

Kaepernick has said he took a knee after speaking with Eric Boyer, a retired Green Beret and former NFL player, and coming to the conclusion that kneeling, rather than sitting on a bench, was a more respectful protest during the national anthem. 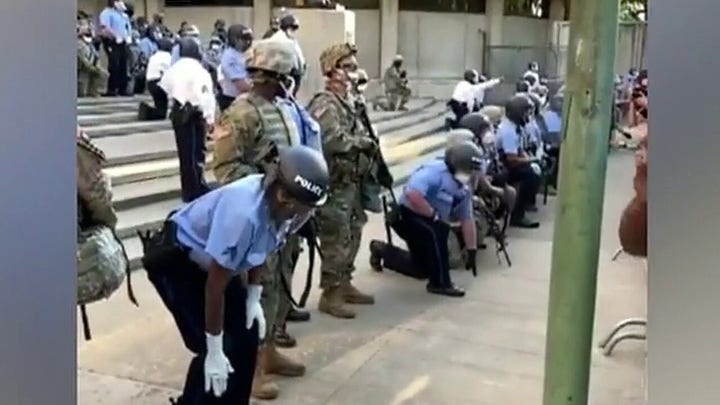 Raab was asked if he would ever “take a knee” as the footballers did the evening earlier and said: "I take the knee for two people -- the Queen and the missus when I asked her to marry me."

Raab’s remarks were swiftly criticized by opposition politicians. Acting Liberal Democrat leader Ed Davey told the BBC that Raab was "out of touch" and said he was going to have to go "further" than an apology.

"I think a fulsome apology and maybe he should actually say that he will take the knee," he said.

Raab has clarified that he has “full respect for the Black Lives Matter movement, and the issues driving them.”

“If people wish to take a knee, that’s their choice and I respect it. We all need to come together to tackle any discrimination and social injustice,” he said.