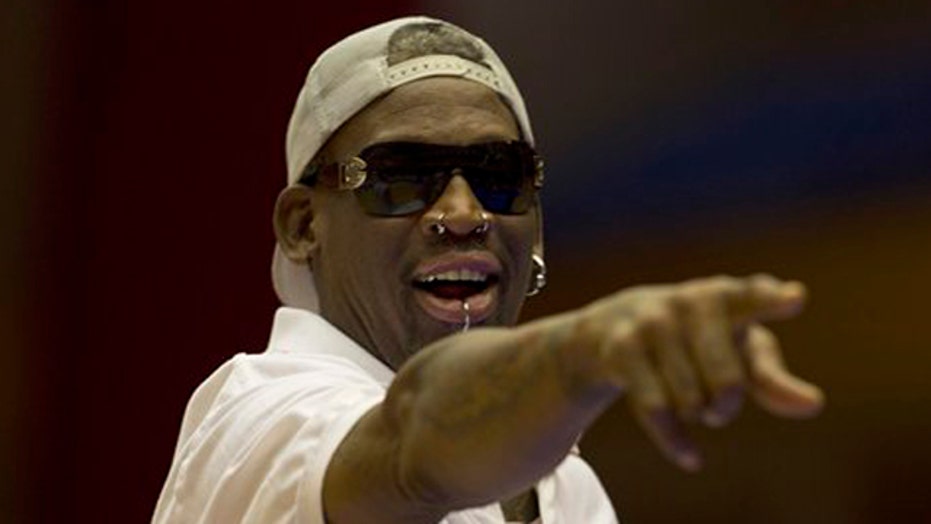 Gutfeld: Dennis Rodman is a wimp

Dennis Rodman may be losing the locker room full of NBA old-timers he brought to North Korea, especially after a TV appearance that went over like an air ball at the buzzer.

Onetime NBA star Charles Smith, a 6 foot, 10 inch tall center who had a stellar career with three teams, said the 10-member team of retired players' planning to play an exhibition game Wednesday against a team of North Koreans has become "dwarfed" by the spectacle that is Rodman.

"What we are doing is positive, but it is getting dwarfed by the other circumstances around it," Smith, 48, told The Associated Press. "Apparently our message is not being conveyed properly due to the circumstances that are much bigger than us, and I think that has to do with politics and government."

Smith's comments came after a bizarre TV appearance in which he and other former stars including Vin Baker, Kenny Anderson and Cliff Robinson sat behind Rodman as he tried to defend the trip to the communist dictatorship. The players appeared to be uncomfortable as Rodman, an NBA Hall of Famer known as much for his erratic behavior as the rebounding and defense he provided alongside Michael Jordan during his days as a Chicago Bull.

"You have 10 guys here, 10 guys who have left their damn families to help this country in a sports venture," Rodman shouted at CNN's Chris Cuomo, when asked about North Korea's abysmal human rights record.

Rodman, known during his playing days as "The Worm," has visited North Korea at least twice previously, and claims to be a good friend of Kim Jong Un, the North Korean leader who recently had his uncle executed and whose administration is now holding American missionary Kenneth Bae prisoner for allegedly plotting to overthrow the Pyongyang government.

As Rodman spoke, Smith attempted to calm him down, only to be met with an angry "I got this."

Other players also reportedly expressed some second thoughts about participating in what was initially billed as a diplomatic mission but has drawn scorn in the U.S.

Most former NBA players seemed to want no part of the trip. The National Basketball Retired Players Association denounced the basketball exhibition.

"Under the right circumstances, basketball can serve as a bridge to bring communities together, but these are not those circumstances," said NBRPA chairman of the board Otis Birdsong, a four-time NBA All-Star. "Standing alongside our partners at the NBA, we do not condone the basketball activities to be conducted in North Korea this week."

Smith, who played on the 1988 U.S. Olympic team and later represented the U.S. in the World Games in 1998, said he knew then what it was to stand proudly on the world stage.

"I felt huge, I felt on top of the world," Smith told the AP. "But I feel the reverse now. I feel a lot of remorse for the guys because we are doing something positive, but it's a lot bigger than us. We are not naive, we understand why things are being portrayed the way they are. We can't do anything about that; if we could, we would.