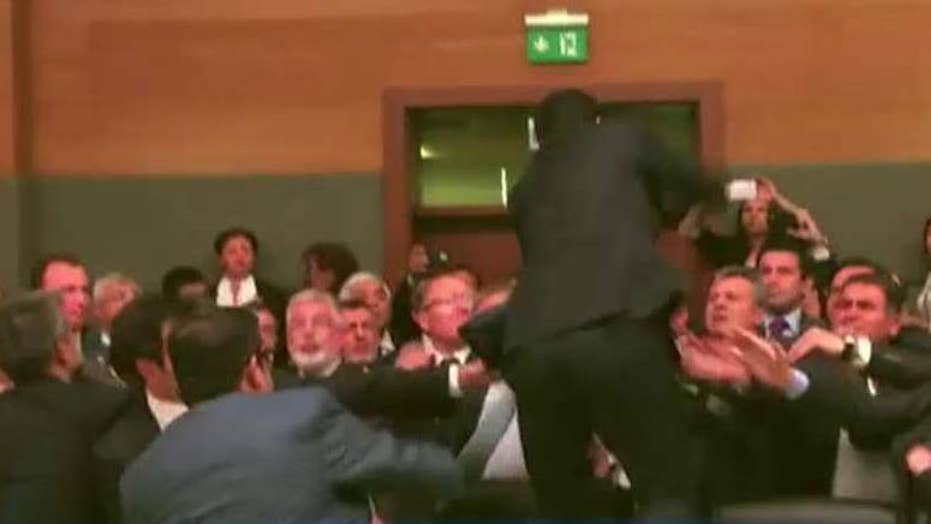 ANKARA, Turkey – Punches were thrown and water bottles were hurled, but a Turkish parliamentary committee has approved a contentious ruling-party proposal to strip legislators of their immunity from prosecution.

The proposed constitutional amendment, which could pave the way for the trial of several pro-Kurdish legislators on terror-related charges, was cleared by the committee late on Monday.

Pro-Kurdish party lawmakers walked out of the meeting following the brawl, which left one legislator with a dislocated shoulder and a second with a bloodied nose.

Video filmed by legislators inside the committee room showed lawmakers throwing water bottles at each other and engaging in fist-fights. One legislator jumped into the fight from a table top and another was seen kicking an opponent.

Pro-Kurdish legislator Mithat Sancar was heard saying the party "would not be part of this theater that is being staged," before he and his colleagues left the meeting.

The amendment, which still needs to be approved by the full assembly, was proposed by the ruling party, after President Recep Tayyip Erdogan accused the pro-Kurdish party, People's Democratic Party, HDP, of being an arm of outlawed Kurdish rebels and repeatedly called for their prosecution.

The move comes amid a surge of violence in Turkey's southeast after a fragile, more than 2-year-old peace process with the rebels collapsed. Hundreds of people, including close to 400 security force members, have died in the renewed fighting, which also displaced tens of thousands of people and left some towns and districts in ruins.

The HDP, which backs Kurdish and other minority rights, denies accusations that it is the political arm of the outlawed Kurdistan Workers' Party, or PKK. It has called on the government to end security forces' operations in the southeast to resume peace efforts. The PKK is considered a terror organization by Turkey and its Western allies.

Although the measure would lift the legal immunities of all lawmakers who have legal cases pending against them, critics say the proposed amendment particularly aims to oust HDP lawmakers from parliament. The party's two co-leaders, Selahattin Demirtas and Figen Yuksekdag, face possible prosecution for making statements last year in support of calls for Kurdish self-rule in southeastern Turkey.

Five legislators were hurt last week on the first day of the discussions on the amendment, which also ended in a fight.