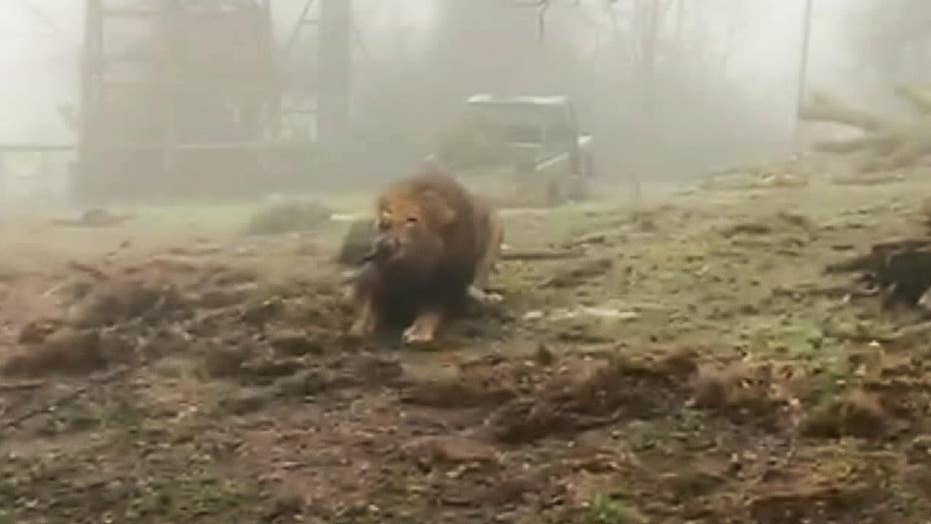 A zoo in the United Kingdom is coming under fire for offering its visitors a chance to play a challenging game of tug-of-war with its lions and tigers for a small fee.

For about $20 (£15), zoogoers — eight and older — at Dartmoor Zoo can join a team of four at a long rope to rival a big cat, according to The Guardian. A juicy piece of raw meat attached to the end of the rope coaxes the lion or tiger into biting the end and giving it a good tug.

The challengers are pulling from the other side of the enclosure and do not come into close contact with the wild animals. The zoo says the activity is beneficial to the big cats, allowing them to get the vital exercise they need.

“In the cooler weather, Dartmoor zoo’s keepers occasionally do rope-pulling with their big cats for enrichment purposes. This type of activity, which is common at many zoos, is very important to keep the animals fit and healthy as it encourages exercise, which builds muscle mass," Dartmoor Zoo said in a statement to The Guardian, adding that it's allowing a small group of guests to join staff members in the tug-of-war-like game for the first time.

A zoo in the U.K. is under fire for allowing visitors to play tug-of-war with its big cats. (Jay/Twitter @jayalex87)

Over the past week, videos of the supposed exercise have been circulating online, garnering thousands of views — and a lot of opinions.

One participant expressed his delight after playing tug-of-war, saying it was an "absolutely amazing experience" with his wife. He later joked about losing. A video he posted of the match was viewed more than 1,000 times.

"Brilliant That zoo is only a 30 min drive to me. I’ve not been for a few years I’m definitely going to play tug o war with a tiger. #DartmoorZoo," one Twitter user replied.

"There is nothing wrong with this. I play the same game with my cats, they love the play hunting mice," another man added.

"The lion had fun too I bet. Dogs and cats love to play tug of war," a third chimed in.

But the Royal Society for the Prevention of Cruelty to Animals (RSPCA) disagrees, telling the BBC the game "doesn't promote respect" for the animals but is rather a "money-making gimmick."

An online petition demanding the zoo stops the practice has already received more than 2,000 signatures, the news organization reports. The creator of the petition, Sue Dally, compared the Dartmoor Zoo to a circus.

“The zoo claims it’s to give the animals intellectual exercise and fun, but it comes across as putting profits before the animal’s welfare. There are plenty of ways that experienced professionals can care for the rare animals, without turning them into a novelty plaything for tourists," Dally said, according to The Guardian.

"Uh lets not treat them like pet dogs- I don't think the tigers would be bothered but if something went freakishly wrong it'll be the animal that suffers eg be shot. Fantastic," one Twitter user wrote.

"I think that it's wrong, and the Zoo should stop it now," another added, tagging the zoo.

"Imagine your source of fun would be playing tug of war with a beautiful but captive tiger/lion," a user pointed out.

But the zoo’s owner, Benjamin Mee, argued the activity isn't cruel at all.

"People are making a fuss about nothing," Benjamin told PlymouthLive this week. "I think this is 100 percent the right thing to be doing; the lion loves it.