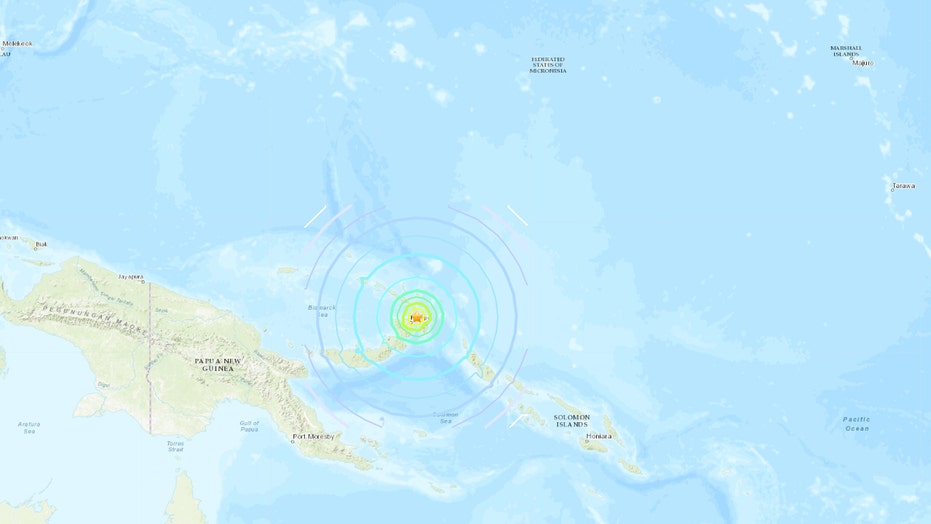 A tsunami alert that warned of "hazardous" waves was issued for Papua New Guinea and the Solomon Islands after a powerful earthquake rattled the region late Tuesday.

The U.S. Geological Survey said the magnitude 7.5 quake was located about 28 miles northeast of Kokopo. The temblor was centered at about 6 miles, a shallow depth.

Shallow earthquakes tend to cause more damage on the Earth's surface, but the USGS estimated that damage and injuries would be low because of the sparse population.

OFF THE COAST OF PORTUGAL, THE EARTH'S CRUST MIGHT BE PEELING IN TWO

The Pacific Tsunami Warning Center initially said that "hazardous tsunami waves" from the quake were possible within 620 miles of the epicenter along the coasts of Papua New Guinea and the Solomon Islands.

“A tsunami is a series of waves,” the agency warned in its advisory. “The time between wave crests can vary from 5 minutes to an hour. The hazard may persist  for many hours or longer after the initial wave.”

After about 90 minutes the agency said the tsunami threat had largely passed and no waves had been observed, but that there were no sea level gauges in the area for measurement. It also cautioned that "minor sea level fluctuations of up to 0.3 meters above and below the normal tide may continue over the next few hours."

There was no tsunami threat to Hawaii or Guam, according to the agency.

Papua New Guinea is located on the eastern half of the island of New Guinea, to the east of Indonesia.

A magnitude 7.5 earthquake in February 2018 in the nation's central region killed at least 125 people and forced another 35,000 from their homes. That quake hit areas that are remote and undeveloped, and assessments about the scale of the damage and injuries were slow to filter out.

Papua New Guinea lies along the Pacific's so-called "Ring of Fire," a 25,000-mile horseshoe-shaped ring, accounting for approximately 90 percent of the world's earthquakes, according to the USGS.