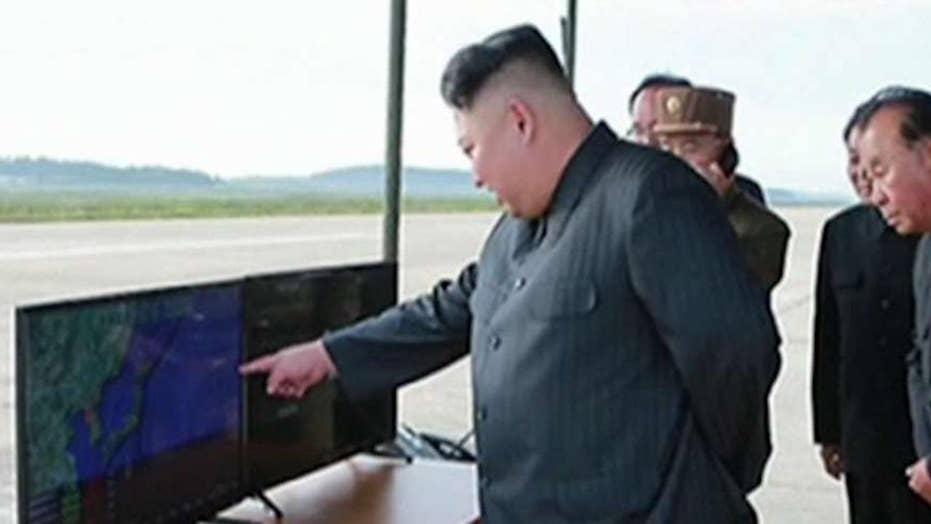 Greg Palkot reports on latest information released from the regime

Through state media he’s quoted as saying that North Korea is going “full speed and straight” to the goal of “completing its nuclear force” and is “nearly” there.

The North Korean leader goes on to say his regime’s aim is to “establish the equilibrium of real force with the U.S.” so the U.S. would “dare not talk about the military option.”

All of this comes after the latest launch by North Korea of an intermediate range ballistic missile that flew a distance of 2,300 miles which, if pointed in that direction, means it could hit the US territory island of Guam.

And all of this also comes as the U.S. is working with its allies here and in the U.N. to put maximum economic diplomatic pressure on Kim’s regime. As late as Friday there was more talk from Trump administration officials of possible military action.

“This is an important statement,” John DeLury of Seoul’s Yonsei University told Fox News. “I think this is an opening.”

For one thing, DeLury notes, the fact that the North Korean leader is talking about achieving “equilibrium” with its nuclear arsenal rather than turning the U.S. into “darkness and ashes” is a good thing. Also that Kim Jong Un thinks he is close to completing that arsenal might mean he thinks he is close to considering negotiations.

“The language is significant,” DeLury said. He adds that the words come from “…Kim Jong Un himself… there is no higher level.”

Experts like DeLury are convinced negotiations are the only way out of the North Korean crisis.

“We got to talk,” DeLury told Fox News. “What has to happen is a senior American official or a trusted confidant of President Trump needs to get in the room with a senior North Korean official or confidant of Kim Jong Un. Until the talks start, this process we’re watching, is just going to go on and on and on.”

The hitch with that is the U.S. has talked with North Korea many times before and it hasn’t worked. This time around, we’re told, Pyongyang might want to keep its nukes. And in the run-up, Kim Jong Un promises to keep testing nuclear devices and launching missiles.

Room enough for some serious regional -- and global -- trouble.