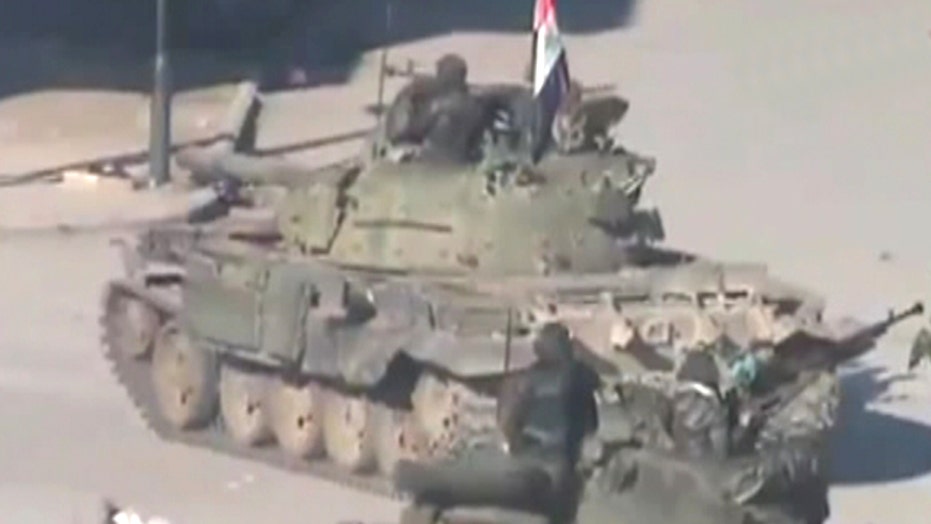 BEIRUT – Syria's longtime vice president said Sunday that his regime and the rebels are both going down a losing path after 21 months of civil war, a rare admission by a top government official that President Bashar Assad's victory is unlikely.

The comments by Farouk al-Sharaa came as an Islamist faction of Syrian rebels captured an infantry base in the northern city of Aleppo, and Syrian warplanes blasted a Palestinian refugee camp in Damascus, killing eight people and wounding dozens, activists said.

Al-Sharaa told the Lebanese newspaper Al-Akhbar that neither the rebels nor the Assad regime can "decide the battle militarily." It appeared to be an attempt to show that the rebels are not the solution to the Syria conflict, and their victory might bring chaos to the country.

Balancing that, he said the Assad regime "cannot achieve change."

The solution to the conflict must come from within Syria, al-Sharaa said, adding that any political settlement "must include stopping all types of violence, and the creation of a national unity government with wide powers."

The Assad regime has long rejected Western involvement in the civil war and has called for talks with the opposition. Most rebel groups refuse to meet with Assad, demanding his removal from power before laying down their arms.

Excerpts of the interview were posted on Al-Akhbar's English-language website late Sunday. The full interview will be published on Monday, the newspaper said.

Last week more than 100 nations, including the U.S., recognized the new Syrian opposition council as the legitimate representative of the country, a boost for the opposition forces that have been bombing regime targets in and around Damascus, once an impregnable stronghold of the Assad regime.

In the latest blow to Assad, rebels overran a military base in Aleppo, Syria's largest city, the second military installation to fall there in a week.

A statement by the al-Tawheed Brigade said the rebels "fully liberated" the military facility in Aleppo on Saturday. It was posted on al-Tawheed's official website on Sunday and said the Islamist rebel brigade's commander was killed in the battle.

The complex, known as Hanano Barracks, includes an army base, a recruiting center and a military school.

The Al-Tawheed Brigade is one of the largest rebel groups operating in Aleppo, which has been a major front in the civil war since July.

One of the videos posted on the group's website shows the body of a man the narrator says is "the hero and martyr who was killed on the day of liberating the infantry school," apparently the Al-Tawheed commander, Col. Youssef al-Jader. A boy said to be the commander's son is seen crying as he leans over the dead man.

In a related development, Egypt said Sunday that it has evacuated more than 4,000 of its nationals from Syria over the past few months. The Cairo Foreign Ministry statement did not give further details. Egypt's national airline halted flights to and from Syria last month because of the deteriorating security situation.

Also Sunday, Iran put forward a six-point plan to end the Syria civil war, including negotiations, presidential elections and a halt to arms shipments. This came during a two-day meeting of 200 representatives of Syrian communities, but no prominent rebels. The rebels are unlikely to relate to the plan, as they refuse to talk to Assad and consider Iran unqualified to mediate because of its support of the regime.

The uprising started in March 2011 as peaceful protests but quickly turned into a civil war after the government's brutal crackdown on dissent. Activists say more than 40,000 people have been killed.

On Sunday, fighter jets screamed over Damascus to bomb two areas in the southern part of the capital.

The Britain-based Syrian Observatory for Human Rights said fighter jets carried out six airstrikes the Hajar Aswad area and the neighboring Yarmouk Palestinian camp, where the rebels have been advancing.

The Observatory relies on reports from activists on the ground.

The Palestinians are divided over the crisis in Syria. When the unrest began in March 2011, the half-million-strong community tried to stay on the sidelines.

A few groups with longstanding ties to the regime are fighting on the government side, including the Popular Front for the Liberation of Palestine-General Command.

An activist video posted online after the attack on Yarmouk shows scattered glass, debris and twisted metal on a narrow street. Gravely injured people are seen lying on the street in pools of blood.

The videos appear consistent with AP's reporting from the area.

In Ramallah, Palestinian officials blasted the Syrian government for the attack.

"We condemn in the strongest terms the crime of Assad's regime in Yarmouk refugee camp, and call on all international parties, including the states that still back this regime, to act immediately and stop these massacres against Syrians and Palestinians in Syria," PLO official Yasser Abed Rabbo told the AP.

Anwar Rajja, a Damascus-based spokesman for the PFLP-GC told the AP that his group is fighting "terrorists," who have come to the camp from the front lines in the suburbs of Damascus. The Syrian regime and state media refer to the rebels as terrorists.