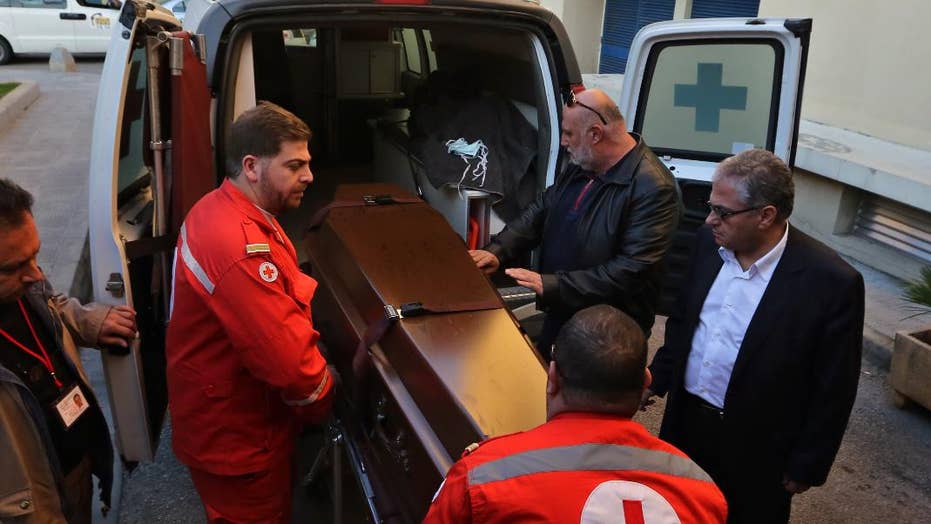 Exclusive: Syrian regime accused of implementing more than 72 torture methods from crucifixion to rape to eye-gouging

Exclusive: Syrian regime is being accused of implementing more than 72 torture methods, including crucifixion, rape, and eye-gouging. Activists are now calling on Congress to place more sanctions on the regime.

Before the Syrian revolution ignited in 2011, Muna Mohamed was a schoolteacher in the eastern city of Deir Ez-Zor.

When protesters swarmed the streets in pursuit of democracy and a change in the Bashar Assad-led regime, she took an active role in the media wing – distributing leaflets, crafting statements on behalf of the opposition and media advocacy.

And then her world and her dignity were ripped apart.

Muna was arrested three times over the next few years – severely beaten with an iron rod, electrocuted, told she must die, constantly threatened she would be raped, and held in solitary confinement.

“I saw an old man stripped naked and beaten until he fainted, they arrested my sister, my teen brother, and my aunt in search of me,” Muna, 31, told Fox News from exile. “I still live the nightmares in my sleep. There are more than 200,000 detainees, and thousands more are disappeared. Friends of mine have been gone for nine years in the prisons.”

Yet Muna considers herself one of the lucky ones.

Thousands have already died in dirty dungeon prisons spanning the decimated country. Others are still languishing and subjected daily to harrowing methods of abuse that the world has not been able to stop.

The Syrian Network for Human Rights, a global non-profit that serves as a leading source on all death toll-related statistics in the war-wracked nation, has compiled the most extensive torture report to date, exposing the barbaric methods of abuse inside the dark walls of government detention facilities and military-run “hospitals” which have led to the deaths of at least 14,000 people.

MORE THAN 7,000 DISSIDENTS ARRESTED, TORTURED IN IRAN'S 'YEAR OF SHAME'

The report, exclusively obtained by Fox News, documents that between March 2011 and September 2019, 14,298 people – including 178 children and 63 women – died in Syria as a result of torture.

More than 14,000 victims allegedly met their fate at the hands of Syrian government forces, while Islamic extremist groups killed 57 through torture. Factions of the armed opposition killed a further 43, while 47 were under the control of the Syrian Democratic Forces (SDF), and another 20 were parties the group was unable to identify.

Focusing specifically on the torture practices of the Damascus regime, the new report has pinpointed a total of 72 methods of torture used against detainees.

The first category highlighted in the report pertains to 39 methods categorized as “physical torture systemically practiced against those detained in the Syrian regime’s detention center.”

Some of the horrific methods include pouring scalding hot water on the victim’s abdomen and back, drowning and suffocating. Then there is torture with electricity, which includes using an electric baton directed at the detainee’s abdomen or reproductive organs, tying the detainee to a metal chair with restraints and delivering an electric current to shock the entire body, which leads to severe nervous system damage, involuntary trembling, and permanent trembling.

The report details fire-related torture, which ranges from heating a metal skewer to the highest possible temperature and holding it against “sensitive parts of the body,” as well as burning with oil, chemical aids, flame, insecticides, and even gunpowder ignited onto the victim’s body. In other cases, victims are alleged to have been hung in various degrees of suspension for days on end, often whipped and lashed as their body dangles.

Torture by prevention of movement is also highlighted. Detainees have been made to squat, stand on one foot, wedged into tires for hours and days, often enduring beating and massive spinal damage. SNHR also documents a method known as the “flying carpet,” in which the detainee is tied to a folding wooden board and made up of two bendable sections, which are bent towards or away from each other, leading to severe spinal injuries.

There is also a technique called “The Crucifixion.” This entails the detainee having their hands and feet tied to a cross “in a grotesque imitation of crucifixion before the beating starts, which particularly targets the reproductive organs.”

That is just the tip of the iceberg in Syrian government prisons.

“Detainees suffer unspeakably in the Syrian regime’s detention centers. The detainee’s clothes are often worn, soiled, ragged, and torn as a result of beatings. This is the primary contributor to the spread of illness, disease epidemics, and infections,” the report stated. “And because of the narrowness of cells and overcrowding, detainees must take turns to stand, sit and sleep.”

SNHR goes on to specify six basic forms of torture within the context of neglect of health care and conditions of detention. These include the denial of access to medicine and treatment, depriving the detainees of bathing, toilet and hygiene facilities, depriving the detainees of clothes and blankets, human stacking in which detainees are so crammed they virtually pile on top of each other, food deprivation and sleep deprivation.

Sexual violence remains a glaring cause for concern. In some cases, both males and females are forced to “strip naked during inspection or torture sessions, to inflict as much harm as possible or to insult human dignity,” some experience “rape or inserting tools in reproductive organs,” and in other unfathomable cases detainees are mandated to sexually abuse and even rape their fellow detainees, SNHR claims.

The report also exposes an array of psychological torture methods. These vary from forcing the detainee to imitate animals – often with a rope tied around their neck – to making them watch and hear the cries of the tortured echo through hollow walls, to keeping deceased detainee’s bodies in cells or forcing others to carry the dead bodies as means of inducing trauma and maximize suffering.

Furthermore, transferring the detainee to a military hospital also comes with its own bundle of atrocities. It points to circumstances in which doctors and nurses are made to “beat the detainee specifically targeting his wounds or broken bones,” and “treating the detainee without any sterilization and depriving him of analgesics and medicine.”

In 2014, the world got a rare peek at the hidden horrors with the release of the “Caesar photographs” leaked by a regime defector. At immense personal risk, the disguised defector brought to Washington more than 55,000 graphic photographs – their authenticity confirmed by the FBI – and testified to the brutal torture happening in his homeland. Yet, the call to action has fallen on deaf ears.

But rather than curb the human rights abuses following the global outpouring of shock and anger, according to SNHR investigators, “the regime supported the officers who issued the torture orders, promoting them to senior positions, and used other state institutions as part of its torture machine.”

“We have taken high risk for our lives and the lives of our families when we left Syria at the beginning of the Syrian revolution," said “Caesar” – who remains in-hiding – to Fox News. “We had great hope that the world that claims freedom and humanity would put an end to the bloodshed in Syria and work to stop the killing and torture inside the Syrian prisons.”

Over the past 4 years, SNHR has poured over some 6,189 Caesar photographs in an attempt to “determine the identity of those shown in these photos because this provides stronger confirmation that this individual is dead, and thus helps determine his or her fate and give his or her family closure.”

Lebanese Red Cross workers carry the coffin of British doctor Abbas Khan, 32, who was seized by Syrian government troops in November 2012, into the Hotel-Dieu de France hospital in Beirut, Lebanon, Saturday, Dec. 21, 2013. The circumstances in which Khan, died while in detention in Syria remain in dispute. A senior British official has accused Syrian President Bashar Assad's government of effectively murdering Khan, while the Syrian authorities say the doctor committed suicide and there was no sign of violence or abuse. (AP Photo/Bilal Hussein) (The Associated Press)

To-date, 801 individuals have been identified despite their distressing physical condition – including two children and 10 women, several of whom are chronicled by SNHR. This includes Ayham Mustafa Ghazzoul, born in 1987, who died on November 2012. His mother recalled that her son received a severe blow to his head, and a friend detailed that he had his nail pulled out and was doused in boiling water, and guards refused to treat him.

Then there was the case of Nedal Abdul Aziz al-Haj Ali, a 37-year-old Ph.D. engineering graduate who was arrested in the summer of 2013. His lifeless body emerged in the trove of Caesar images – severely emaciated with obvious signs of torture, his family said.

SNHR additionally pointed to stories of sordid survival – some former detainees have been rendered disabled and brain-damaged as a result of their mistreatment behind bars. Former detainees offered additional testimony in the report – recounting scenes such as one where a child was sprayed with insecticide and set on fire before his body was wrapped in gauze, “and from time to time, they (security) lifted the gauze, peeled his skin with a blade.” Other alleged cases involved medical students extracting bone from a victim’s leg, and putting an external fixation device on it.

In this photo released by the Syrian official news agency SANA, Syrian President Bashar Assad, second right, meets with a Russian delegation in Damascus, Syria, Tuesday, Aug. 20, 2019. Assad said his forces' recent victories in the northwestern province of Idlib "show the determination of the people and the army to strike terrorists, until all parts of Syria are liberated." (SANA via AP)

The Syrian Foreign Ministry did not respond to a Fox News request for comment, but the regime has routinely rejected the existence of systematic torture and abuse of detainees.

But as the Damascus administration moves closer to the final battle to retake the last opposition bastion of Idlib, the SNHR and its activists are pushing Congress to push forward with The Caesar Syrian Civilian Protection Act. This would impose a fresh wave of sanctions on Syrian leaders and would compel the U.S to support international prosecution of alleged human rights violators.

Despite passing the House of Representatives three times since 2016 with bipartisan support, the measure currently languishes in the Senate.

“The most (important) message of this report is to draw attention to [it]; we need Congress to move ahead with his bill. This is important to the Syrian people, and for the world in fighting torture,” SNHR Founder Fadel Abdul Ghany said. “It is civilian protection and accountability. What has happened to Syrians when it comes to these torture crimes amounts to extermination.”