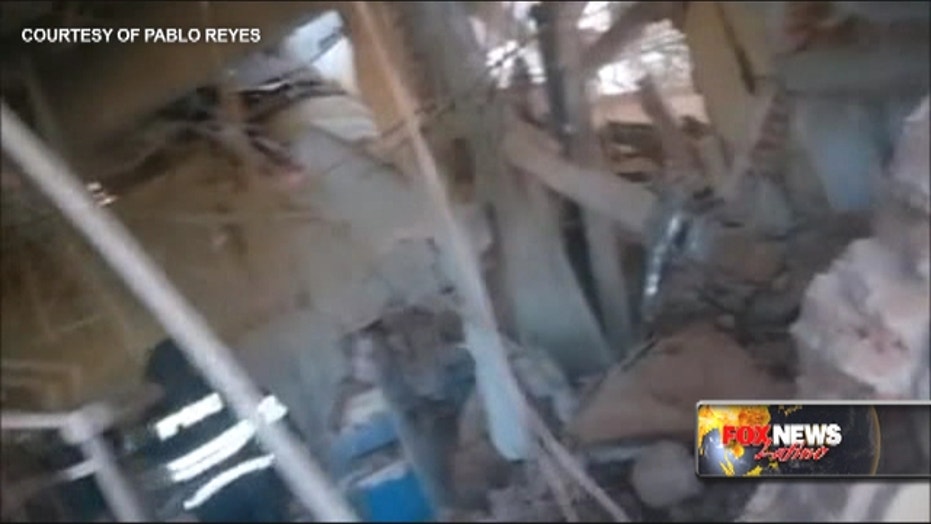 Video captured by two people showed the moment and the aftermath of a powerful gas tank truck explosion that shattered a maternity and children's hospital in Mexico City.

From around the world, expressions of condolence were sent about the explosion in a Mexico City maternity hospital that killed three, including two babies, and injured scores more.

From Vatican City, Pope Francis sent a telegram the Archbishop of Mexico, Cardinal Norberto Rivera Carrera, offering "prayers for the dead" and "condolences to the families of the deceased… and wishes of a speedy recovery to the injured."

Meanwhile, in the western edge of Mexico City, where the Maternity and Children's Hospital of Cuajimalpa is located, harrowing tales from survivors and local residents began to emerge.

Inside the maternity hospital, concern quickly turned to panic as the sour smell of propane fuel seeped in and a vapor cloud grew at the emergency room's entrance. The crew of a gas tanker truck outside began yelling: "Call the firefighters! And tell people to get out!"

A mammoth explosion shattered the morning, collapsing most of the hospital and sending flames and smoke boiling into the sky Thursday morning.

Fatimas Parras, 16, was getting ready for school in her nearby home when the blast blew tiles off the roof. With her hair still wet, she ran outside where she encountered a boy of about 13 carrying an infant from the hospital.

"The baby was covered in dust and the boy was running. He started to scream 'Help! Help!'" Parras said. Neighbors who rushed to the scene found bleeding mothers carrying newborns out of the wreckage hospital while babies cried in the rubble.

The blast killed a weeks-old baby and a 25-year-old nurse at the scene and a second infant died hours later, Mexico City officials said. Eight more children and seven adults were reported in serious condition among the more than 70 people injured. Late Thursday, officials said no one remained beneath the rubble of the Maternity and Children's Hospital of Cuajimalpa.

The gas truck driver and two other employees of the Express Nieto company were hospitalized and in custody, Mayor Miguel Angel Mancera said Thursday.

According to CNN, the driver was identified as Julio César Martínez and his two assistants as Carlos Chavez and Salvador Alatorre. The charges against them were not immediately available.

The company has provided gas to all the city's public hospitals since 2007. Up to 80 percent of Mexicans use propane rather than natural gas delivered by mains, and highly explosive liquified propane is distributed to homes and businesses either by trucks like the one that exploded or in cylinders, said Margarita Palma of Amexgas, a trade association of Mexico's propane distributors.

The blast occurred at 7:05 a.m. when the truck was making a routine delivery of gas to the hospital kitchen and gas started to leak. Witnesses said the tanker workers struggled for 15 or 20 minutes to repair the leak while a large cloud of gas formed.

"The hose broke. The two gas workers tried to stop it, but they were very nervous. They yelled for people to get out," said Laura Díaz Pacheco, a laboratory technician.

"Everyone's initial reaction was to go inside, away from the gas," she added. "Maybe as many as 10 of us were able to get out ... The rest stayed inside."

Officials said 110 people were inside the 35-bed hospital when the truck blew up.

Local resident Carlos Soria Rezendiz said homes next to the hospital had broken and cracked windows, and many neighbors ran to help evacuate victims.

After the explosion, "some of people ran and began to pull out people. They began to pull up debris and remove people who were screaming and waving only their hands," said Soria's cousin, Ariatna Resendiz.

Across town, Miguel Angel García, 22, was driving his city bus route when he heard about the explosion at the hospital where his wife had just given birth to their second daughter on Wednesday. He let off his passengers, dropped off the bus and hurried to the hospital.

"When I arrived and saw it in pieces, I thought the worst," García said. He waited for an hour before authorities told him his wife and daughter had been taken to the Hospital ABC-Santa Fe in a nearby district.

As the day wore on, people arrived at the Hospital ABC offering diapers and baby formula. There was an hour-long wait to donate blood.

It was the closest hospital to the explosion and received 31 patients, including 17 children. Dr. Moisés Zielanowski, the hospital's director of operations, said six babies arrived unaccompanied and without identification.

Mancera, the mayor, said some of the injured were already being released from other hospitals, including some mothers who suffered injuries while using their bodies to shield their children.