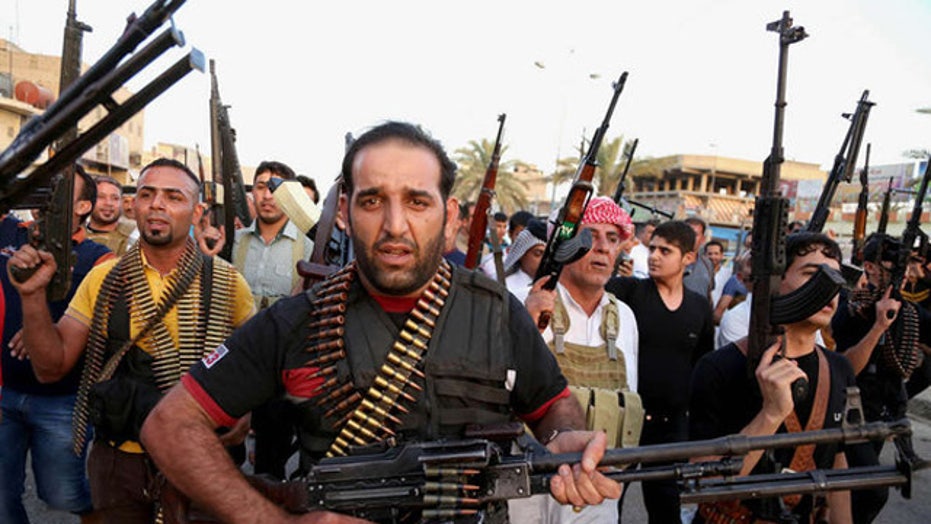 Sunni fighters led by an Al Qaeda-inspired militant group expanded their offensive in a volatile western province on Saturday, capturing three strategic towns and the first border crossing with Syria to fall on the Iraqi side.

It's the latest blow against Prime Minister Nouri al-Maliki, who is fighting for his political life even as forces beyond his control are pushing the country toward a sectarian showdown.

In a reflection of the bitter divide, about 20,000 heavily armed Shiite militiamen -- eager to take on the Sunni insurgents -- marched through Baghdad's Sadr City district with assault rifles, machine-guns, multiple rocket launchers and missiles. Similar parades were held in the southern cities of Amarah and Basra, with the militants in Basra displaying field artillery pieces hauled by heavy trucks.

The Shiite militias formed in response to the current ISIS offensive could represent a dangerous wild card in the new battle for Iraq. The Mahdi Army, a militia loyal to al-Sadr, battled U.S. troops and was blamed for attacks on Sunni civilians during the height of the country's sectarian bloodletting in 2006 and 2007.

The same was true of several Iran-backed militias in the years prior to the American withdrawal in 2011. Last week, in the wake of the capture of the cities of Mosul and Tikrit by ISIS, al-Sadr has called for the formation of "peace brigades" to repel attacks on sites holy to Shiites across Iraq.

The towns of Qaim, Rawah and Anah are the first territory seized in predominantly Sunni Anbar province, west of Baghdad, since fighters from the Islamic State of Iraq and the Levant group overran the city of Fallujah and parts of the provincial capital of Ramadi earlier this year.

Sunni militants have carved out a large fiefdom along the Iraqi-Syrian border and have long traveled back and forth with ease, but control over crossings like that one in Qaim allows them to more easily move weapons and heavy equipment to different battlefields. Syrian rebels already have seized the facilities on the Syrian side of the border and several other posts in areas under their control.

Police and army officials said Saturday that the Sunni insurgents seized Qaim and its crossing, about 200 miles west of Baghdad, after killing some 30 Iraqi troops in daylong clashes Friday.

Sunni militants also captured the Euphrates River town of Rawah, ransacking government offices and forcing local army and police forces to pull out, Mayor Hussein AIi al-Aujail said. The town, which had remained under government control since nearby Fallujah fell, also lies dangerously close to an important dam near the city of Haditha.

The vast Anbar province stretches from the western edges of Baghdad all the way to Jordan and Syria to the northwest. The fighting in Anbar has greatly disrupted use of the highway linking Baghdad to the Jordanian border, a key artery for goods and passengers.

Al-Maliki's Shiite-dominated government has struggled to push back against Islamic extremists and allied Sunni militants who have seized large swaths of the country's north since taking control of the second-largest city of Mosul on June 10 as Iraqi government forces melted away.

The prime minister, who has led the country since 2006 and has not yet secured a third term after recent parliamentary elections, also has increasingly turned to Iranian-backed Shiite militias and Shiite volunteers to bolster his beleaguered security forces.

The parades in Baghdad and other mainly cities in the mainly Shiite south revealed the depth and diversity of the militia's arsenal, from field artillery and missiles to multiple rocket launchers and heavy machine guns, adding a new layer to mounting evidence that Iraq is inching closer to a religious war between Sunnis and Shiites.

Al-Maliki has come under growing pressure to reach out to disaffected Kurds and Sunnis, with many blaming his failure to promote reconciliation led to the country's worst crisis since the U.S. military withdrew its forces nearly three years ago.

In Baghdad, about 20,000 militiamen loyal to anti-U.S. Shiite cleric Muqtada al-Sadr, many in military fatigues and even some wearing red berets, white gloves and combat helmets, marched through the sprawling Shiite Sadr City district, which saw some of the worst fighting between Shiite militias and U.S. soldiers before a cease-fire was reached in 2008 that helped stem the sectarian bloodshed that was pushing the country to the brink of civil war.

Meanwhile another high-level Shiite cleric in Iraq issued a warning to American military advisers bound for Iraq Friday, hours before Sunni militants captured a crossing on Iraq's border with Syria and Shiite militia members paraded in Baghdad and other cities.

Sky News reports that Nassir al-Saedi, a cleric loyal to the firebrand Muqtada al-Sadr, referred to America as "the occupier" in a sermon during Friday prayers and added "We will be ready for you if you are back."

Similar parades took place in the southern cities of Amarah and Basra, both strongholds of al-Sadr supporters.

Grand Ayatollah Ali al-Sistani, the most respected voice for Iraq's Shiite majority, on Friday joined calls for al-Maliki to reach out to the Kurdish and Sunni minorities a day after President Barack Obama challenged him to create a leadership representative of all Iraqis.

Al-Sistani normally stays above the political fray, and his comments, delivered through a representative, could ultimately seal al-Maliki's fate.

Al-Maliki's State of Law bloc won the most seats in the April vote, but his hopes to retain his job have been thrown into doubt, with rivals challenging him from within the broader Shiite alliance. In order to govern, his bloc, which won 92 seats, must first form a majority coalition in the new 328-seat legislature, which must meet by June 30.

If al-Maliki were to relinquish his post now, according to the constitution, the president, Jalal Talabani, a Kurd, would assume the job until a new prime minister is elected. But the ailing Talabani has been in Germany for treatment since 2012, so his deputy, Khudeir al-Khuzaie, a Shiite, would step in for him.

The U.S., meanwhile, has been drawn back into the conflict with so much at stake. Obama announced Thursday he was deploying up to 300 military advisers to help quell the insurgency. They join some 275 troops in and around Iraq to provide security and support for the U.S. Embassy and other American interests.

Obama has been adamant that U.S. troops would not be returning to combat, but has said he could approve "targeted and precise" strikes requested by Baghdad.

Meanwhile, on Saturday four separate explosions killed 10 people, including two policemen, and wounded 22 in Baghdad, according to police and hospital officials. And in an incident harkening back to the peak days of sectarian killings in 2006 and 2007, two bodies, presumably of Sunnis, were found riddled with bullets in Baghdad's Shiite district of Zafaraniyah, police and morgue officials said.

All officials spoke on condition of anonymity because they were not authorized to speak to journalists.