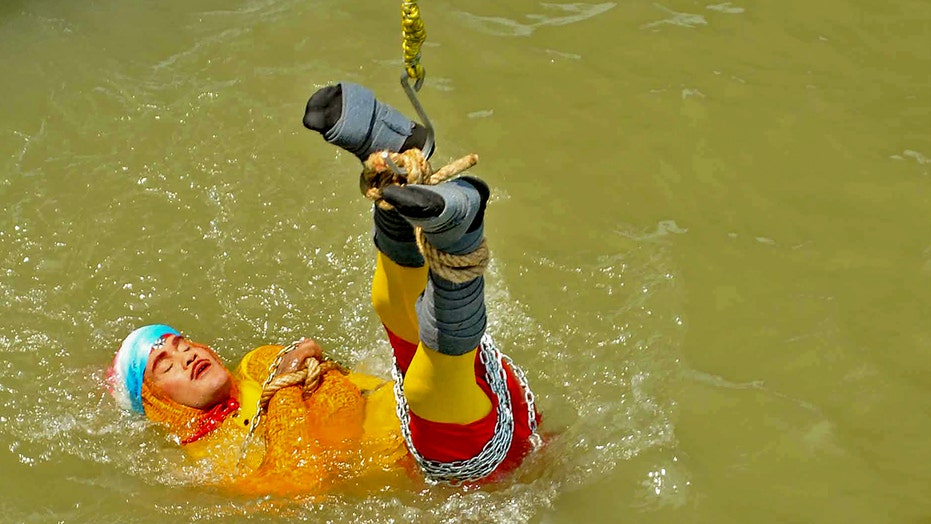 A stuntman in India attempting to recreate a trick by magic legend Harry Houdini has been declared missing and is feared dead, a day after he reportedly jumped shackled into a river.

Chanchal Lahiri, who is also known by the stage name Wizard Mandrake, reportedly jumped into the Hooghly River on Sunday while tied up with rope and steel chains.

Before the plunge, he was asked by a local photographer why he risked his life for magic.

Lahiri responded, according to the BBC: “If I can free myself it will be magic, if I cannot, it will be tragic.”

In this photo taken on June 16, 2019 Indian stuntman Chanchal Lahiri, known by his stage name "Jadugar Mandrake", is lowered into the Ganges river, while tied up with steel chains and ropes, in Kolkata. - An Indian magician who went missing after being lowered into a river tied up in chains and ropes in a Houdini-inspired stunt is feared drowned, police said June 17. (Photo by STR / AFP) (Photo credit should read STR/AFP/Getty Images)

There are conflicting reports about whether Lahiri jumped into the broadest part of the river from the Howrah Bridge in Kolkata or was dropped in with a crane. The plan was for him to swim back to the shore after untying himself.

But local newspapers reported Lahiri – also identified as Chanchal Sarkar by the Hindustan Times – has not reemerged from the river since Sunday, sparking a massive search.

“We have searched the area extensively but neither Sarkar nor his body could be found,” a police officer told the Hindustan Times on Sunday, adding the stuntman could not be declared dead until a body was found.

PAINTER SURVIVES BEING IMPALED B BAMBOO SPIKE AFTER FALLING OFF LADDER

Lahiri is a resident of the southern suburbs of Kolkata and sought permission from both the Kolkata Police and the Kolkata Post Trust before attempting the stunt, police officer Syed Waquar Raza told the Times of India. Going into the river, however, was never part of the original proposal, Raza said.

“He had clearly mentioned the act was to happen on a boat or vessel and there was no connection with water. Hence, we allowed him permission,” he said. “However, he did vaguely mention an ‘extra act,’ which he did not clarify. We are investigating.”

Chanchal Lahiri, seen here attempting two different magic tricks in the Hooghly River in Kolkata, has been declared missing and is feared dead after his latest trick went wrong. (REUTERS)

Lahiri has previously attempted similar tricks. More than 20 years ago, he escaped after being lowered into the same river inside a glass box.

After another Houdini-inspired plunge in 2013, however, he was harassed by spectators who claimed they saw him escape through a secret trap-door built into a steel cage after he was lowered into the water.