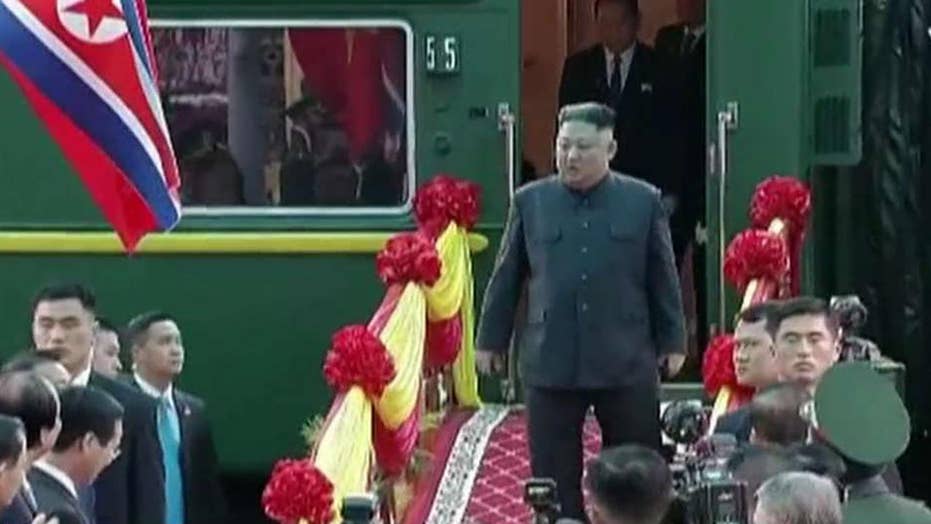 SEOUL, South Korea – The Trump-Kim summit may be happening 2,000 miles away in Vietnam, but most people in this country are closely following all the details that emerge from the meeting.

There is a lot at stake on the Korean peninsula. After the first summit in Singapore that was a lot of show, the hope here is that this meeting will get down to substantial issues.

One of the possible bargaining chips President Trump holds is a political statement about the end of the Korean War. Fighting stopped here with an armistice some 65 years ago.  The governments of both North and South Korea want an end-of-war declaration.

Most here also agree they’d “feel safer” if North Korea leader Kim Jong Un delivered on what he’s been talking about: The dismantling and inspection of the Yongbyon site, one of the locations where it is believed the regime manufactures material for its nuclear arsenal.

A South Korean protester with a box cutter tears a North Korean flag during a rally to oppose end of the Korean War declaration in the upcoming summit between U.S. President Donald Trump and North Korean leader Kim Jong Un near the U.S. embassy in Seoul, South Korea, Tuesday, Feb. 26, 2019. (AP Photo/Ahn Young-joon)

President Trump has been talking up the economic potential of North Korea if the government chooses to denuclearize. While ex-Congressman Kim, who now does business in Seoul, thinks that’s “exaggerating just a little bit,” he does think there are prospects in the North and it is a “good carrot.”

Not everyone in Seoul is pleased with the Hanoi summit.

There was a small but noisy protest outside the U.S. Embassy on Tuesday. Those present complained that the regime’s human rights abuses are not being addressed at the summit. They were also avoided at the first summit in Singapore.

There are an estimated 120,000 people in political gulags in North Korea.

South Korean protesters shout slogans during a rally demanding the end the Korean War and to stop the sanction on North Korea near the U.S. embassy in Seoul, South Korea, Tuesday, Feb. 26, 2019. (AP Photo/Lee Jin-man)

Still, most here are hoping for the best, knowing that negotiations with North Korea have come this close to peace in the past, only to fail.

I asked Kim, who is a Republican and was the first Korean-American in the House of Representatives, what could be different this time around.

He didn’t hesitate to respond.

Experts agree.  The North Korea leader and the timing of the talks could also make the difference.

But things could also go wrong.