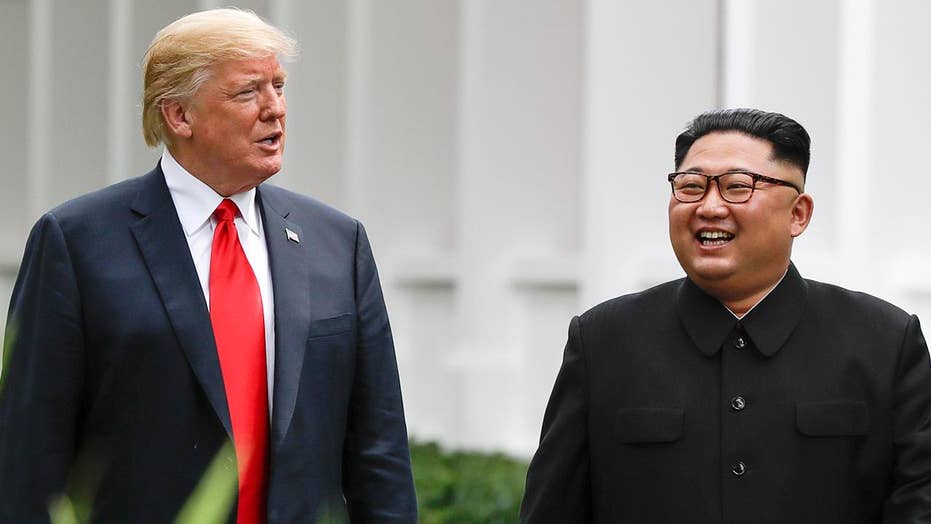 Only eight months after the first U.S.-North Korea summit, President Trump and North Korean leader Kim Jong Un met again on Wednesday in Vietnam but walked away from negotiations about 24 hours later.

A lunch and signing ceremony that had been scheduled for Thursday was canceled and Trump departed for Washington several hours ahead of schedule. Trump remained non-committal about a third summit.

Read on to see what happened in Vietnam and how the relationship between Trump and Kim has evolved since their historic meeting in June.

Trump told reporters he was unable to reach a deal with North Korea because Kim wanted U.S. sanctions to be completely removed before he promised to shut down North Korea's Yongbyon nuclear facility.

“It was about the sanctions,” Trump said. “Basically, they wanted the sanctions lifted in their entirety, and we couldn’t do that. They were willing to denuke a large portion of the areas that we wanted, but we couldn’t give up all of the sanctions for that.”

Despite the lack of progress, the president said he trusted Kim's promise he would not resume nuclear and missile testing, but that the current U.S. sanctions would stay in place.

Trump and Kim shake hands at the Sofitel Legend Metropole Hanoi in Vietnam ahead of their second summit.

“It’s an honor to be with Chairman Kim," Trump said at the time. "I thought the first summit was a great success and I think this one, hopefully, will be equal or greater than the first."

After aides met in North Korea to discuss a second summit, Trump tweeted to confirm that it would be happening on Feb. 27 and 28 in Hanoi.

He tweeted later that day that he is hopeful for North Korea’s success in the future.

“North Korea, under the leadership of Kim Jong Un, will become a great Economic Powerhouse. He may surprise some but he won’t surprise me, because I have gotten to know him & fully understand how capable he is. North Korea will become a different kind of Rocket - an Economic one!” he wrote.

Feb. 5, 2019: Trump announces second summit at State of the Union

During his State of the Union address, Trump announced he and Kim would meet for a second summit at the end of February in Vietnam.

"As part of a bold new diplomacy, we continue our historic push for peace on the Korean Peninsula," he said. "Our hostages have come home, nuclear testing has stopped, and there has not been a missile launch in more than 15 months."

North Korean envoy Kim Yong Chol visited the Oval Office on Jan. 18 for 90 minutes to discuss denuclearization and a second summit. He brought a letter from the North Korean leader to Trump.

The next day, Trump confirmed plans were underway for a second summit at the end of February.

Trump also responded to Kim’s letter, which North Korean media reported as a “good personal letter,” the KCNA said, according to Yonhap News.

“He spoke highly of President Trump for expressing his unusual determination and will for the settlement of the issue with a great interest in the second DPRK-U.S. summit,” the news outlet added.

In a New Year’s speech, Kim said he was prepared to meet with Trump, though he threatened “an alternative course” if the U.S. "continues to break its promises and misjudges our patience by unilaterally demanding certain things and pushes ahead with sanctions and pressure."

As he returned to the U.S. from the G20 summit in Argentina in December, Trump told reporters there would be a second summit with North Korea by the end of January or February, Reuters reported.

“We're getting along very well," he reportedly said. "We have a good relationship with Kim."

Trump also said he planned to invite North Korea's leader to the U.S. at some point.

South Korean President Moon Jae-in met with North Korean leaders in Pyongyang in September to discuss denuclearization and a second summit with Trump.

He told Fox News’ Bret Baier that he felt he had “ascertained Chairman Kim’s commitment to complete denuclearization.”

“If the United States could take corresponding measures, then I believe we will be able to expedite North Korea by further denuclearization measures,” Moon said.

At the time, Moon said he believed a second summit could happen by the end of 2018.

When they met in June 2018, Kim and Trump signed a statement promising to work towards denuclearization, but without a specific plan. (AP Photo/Evan Vucci, File)

About three months after the first summit between Kim and Trump, North Korea’s foreign minister Ri Yong Ho complained to the United Nations that the U.S. was not responding to North Korea’s “significant goodwill measures” to denuclearize the country, Reuters reported.

“Without any trust in the U.S. there will be no confidence in our national security and under such circumstances, there is no way we will unilaterally disarm ourselves first,” he told the U.N.

Trump and Kim began their historic summit with a handshake on the morning of June 12, 2018, in Singapore.

After one-on-one talks, expanded discussions with their aides and a “working lunch,” the two world leaders signed a statement promising to establish a better relationship between the two nations and work towards denuclearization - without any specifics about how denuclearization would be accomplished.

"We had a really fantastic meeting, a lot of progress, really very positive," Trump said. "I think better than anybody could have expected. Top of the line, really good. We’re going right now to a signing.”

In the months leading up to the first summit between Trump and Kim, the leaders continued to go back and forth on whether they would meet. Though Trump accepted Kim’s invitation to meet in early March, the date and location of the meeting (June 12 in Singapore) weren’t set until May.

However, North Korean leaders threatened to cancel the talks midway through May and Trump himself said he would back out.

Leaders from both sides eventually said they would be willing to talk after South Korean president stepped in to talk with North Korean leaders and aides from both North Korea and the U.S. met in North Korea, Singapore and New York City to finalize details ahead of the actual summit.

The summit was officially confirmed again by Trump on June 1 after he received a personal letter from Kim, delivered by a North Korean official to the White House.