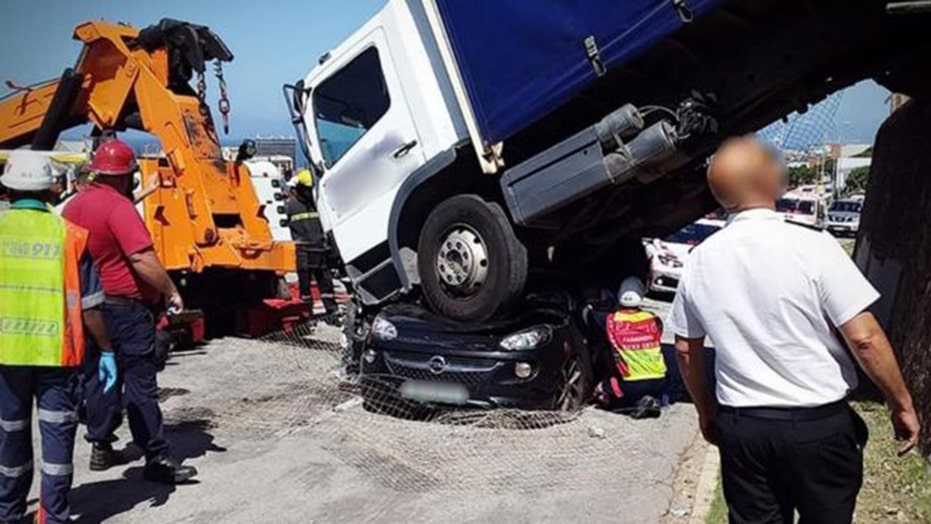 A South African woman suffered serious injuries after a massive truck rolled down a hill and landed directly on top of her car, flattening it and trapping her inside, police said.

The unidentified 26-year-old woman was in her car, in the city of Port Elizabeth, at about 2 p.m. on Tuesday when a truck's brake apparently stopped working. Parked by its driver as he picked up his kids from school in the area, the truck rolled away, over a ledge and onto her car down below.

A 26-year-old woman suffered serious injuries after a truck landed on top of her car in South Africa on Tuesday.  (Netcare911)

“When he returned to his truck, he noticed it was no longer parked where he had left it," Sandra Janse van Rensburg, a police captain in the area, told HeraldLive. "He then noticed that the truck had rolled forward and collided with an Opel Adam that was traveling in Diaz Road towards CJ Langenhoven Drive."

WASHINGTON CAR CRASH ENDS WITH 1 VEHICLE ON TOP OF THE OTHER, POLICE SAY

The woman was trapped inside her car for almost 40 minutes, the BBC reported. Photos of the accident show the woman's car nearly flattened.

Authorities said the woman was trapped inside her car for nearly 40 minutes as rescuers worked to free her. (Netcare911)

"The truck was squashing both her and her car. Parts of it had to be cut off in order to free her," Shawn Herbst, a spokesman for emergency rescue service Netcare 911, told the news outlet. Rescuers used hydraulic tools to remove the woman from the car.

One she was freed, she was transported to the hospital with multiple injuries, including fractures, authorities said. The truck driver, who was not identified, is said to be under investigation for reckless and negligent driving.