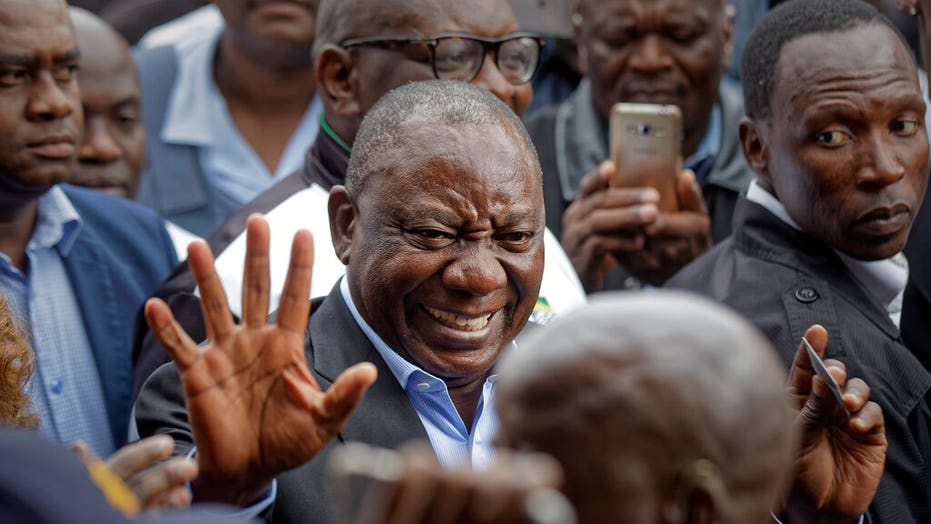 The African National Congress, which has been in power since South Africa became a democracy, has cruised to victory in the country's presidential and parliamentary elections, albeit with diminished support due to government corruption.

The ANC, led by President Cyril Ramaphosa, received 57 percent of the vote on Wednesday, according to the electoral commission. In 2014, the party received 62 percent.

The election victory will be perceived as a mandate for Ramaphosa to work to eradicate corruption that has plagued the government and the party, which has been governing the country since the fall of the apartheid system.

A gathering of representatives of smaller parties take to the stage to protest their claim that the elections were not free or fair, at the Independent Electoral Commission Results Center in Pretoria, South Africa, Thursday, May 9, 2019.  (AP Photo/Ben Curtis)

“It’s now up to Ramaphosa to clean up the ANC, to stop the looting in government,” said commentator Barney Mthombothi. “He can argue that the ANC lost its share of the vote because of the rampant corruption under the previous Zuma leadership.”

Ramaphosa admitted during the campaign that the party is facing issues and has vowed not to have any corrupt members in his Cabinet.

“After he voted in Soweto, Ramaphosa pledged to root out corruption,” Mthombothi added. “He will have to deliver decisively on those words.”

But while the ANC won the election by a large margin, 35 smaller parties jointly filed a complaint with the electoral commission complaining of irregularities and say an audit of the vote must be conducted, possibly even leading to a rerun of the election.

Mmusi Maimane, leader of the largest opposition party, the Democratic Alliance, is greeted by a supporter as he visits the Independent Electoral Commission Results Center in Pretoria, South Africa Thursday, May 9, 2019. South Africans voted Wednesday in a national election and preliminary results show that the ruling African National Congress party (ANC) has an early lead in the national elections but has seen its share of the vote drop significantly. (AP Photo/Ben Curtis)

The Democratic Alliance, the largest opposition party, received 21 percent of the vote, also slightly less than it got five years ago.

“Even though we’ve lost a few votes, we’ve held the center of South Africa politics,” Mmusi Maimane, the DA party leader. “We will work to regain those votes because we are the party for all South Africans of whatever race.”

The populist left-wing Economic Freedom Fighters, meanwhile, increased its share of the vote from 6 percent to 10 percent.

The biggest loser of the elections appears to be voter turnout, which declined by 9 percent. About two-thirds of people participated in the election compared to nearly three-quarters of people last time.

The current results aren’t yet final as voting tallies from remote areas in South Africa haven’t been counted. The final results are likely to be announced by Saturday.