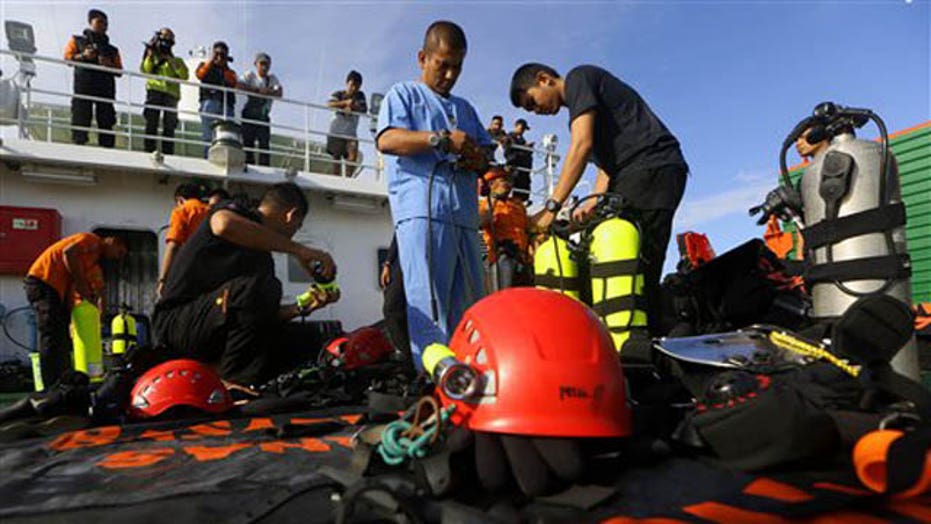 AirAsia jet may have landed safely on water before sinking

Indonesian officials said they were confident Saturday that they had located the wreckage of AirAsia Flight 8501 after sonar equipment detected four large objects on the ocean floor.

The biggest piece, measuring 59 feet long and 18 feet wide, appeared to be part of the jet's body, said Henry Bambang Soelistyo, chief of the National Search and Rescue Agency.

Though strong currents and big surf have prevented divers from entering waters to get a visual of the suspected fuselage, officials were hopeful they will find many of the 162 passengers and crew inside, still strapped in their seats. Thirty bodies have been found so far.

"I'm confident this is part of the AirAsia plane," Soelistyo told reporters at a news conference Saturday.

Indonesian officials also said Saturday that the plane did not have permission to fly the route from Surabaya to Singapore it was flying when it crashed.

"So AirAsia has committed a violation of the route that has been given to them," transport ministry spokesman J.A. Barata told The Wall Street Journal. He said the company's flights from Surabaya, Indonesia's second largest city, to Singapore had consequently been suspended on Friday.

AirAsia used to have permission to fly the route daily, but the number of slots was cut because the country was nearing its quota for flying people to Singapore, said Indonesia’s acting director general of aviation Djoko Murjatmodjo.

Murjatmodjo added that AirAsia had been flying the route on Mondays, Wednesdays, Fridays and Sundays rather than the four days designated by the Transportation Ministry. He said the ministry is investigating why AirAsia was flying the route outside its permitted schedule, The Wall Street Journal reported. The probe will include an investigation of the ministry.

The theory that passengers were alive at some point after impact appeared to be supported by Jusman Syafii Djamal, the former transport minister, who said that the fact that the emergency door was found intact may be evidence that the door was opened.

Aviation experts believe the pilot of the doomed plane may have tried to land the jet in the ocean only to have it sink in the high seas.

The Airbus A320 crashed Dec. 28, halfway into a two-hour flight from Surabaya, Indonesia's second-largest city, to Singapore. Minutes before losing contact, the pilot told air traffic control that he was approaching threatening clouds, but was denied permission to climb to a higher altitude because of heavy air traffic.

It remains unclear what caused the plane to plunge into the Java Sea, though bad weather appears to have been a factor, according to a 14-page report released by Indonesia's Meteorology, Climatology and Geophysics Agency.

"Flight 8501 appears to have been trapped in bad weather that would have been difficult to avoid," the report said.

While the plane's black boxes -- the flight data and cockpit voice recorders -- have yet to be located, the discovery of the wreckage, especially if it is largely intact, would greatly benefit the investigation.