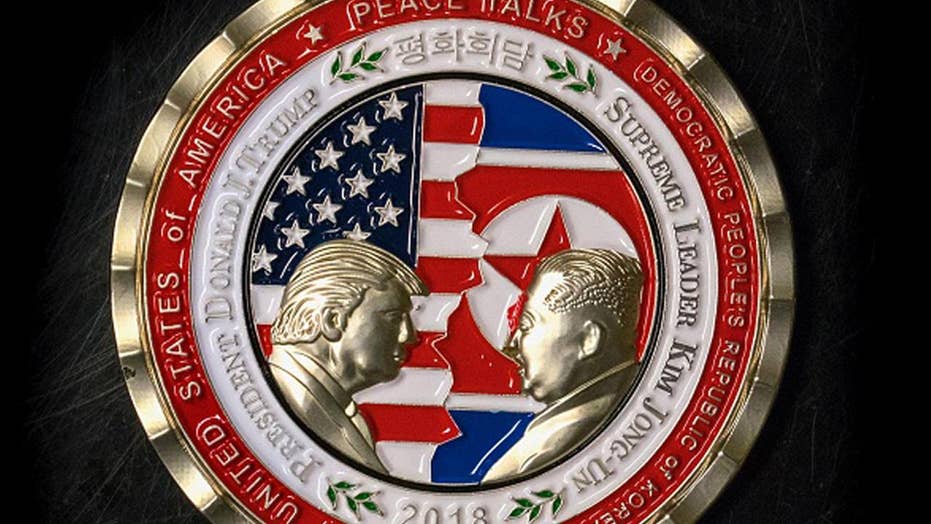 A coin commemorating the now-canceled summit between President Trump and North Korean Leader Kim Jong Un is in high demand. It’s so sought after it crashed the White House gift shop website.

With the long-anticipated meeting with between President Trump and North Korea’s Kim Jong Un now back on for next week, the Singapore Mint unveiled three commemorative coins on Tuesday for the historic summit.

The three gold, silver, and base-metal medallions commemorate the summit as a "momentous step to world peace" and show Singapore's role as a "neutral host, and an economic and security gateway between the East and the West," according to a news release from the mint.

Each medallion features the inscription "World Peace" on the back, in addition to a dove and olive branch motif. The national flowers of the United States and North Korea, rose and magnolia sieboldii, are also located on the rear of the coin.

Singapore's commemorative coins, of which only a few thousand pieces have been made, were available to pre-order from the mint on Tuesday and cost more than $1,300 for the gold version, $118 for the silver, and $36 for the base-metal version.

The commemorative item features the silhouettes of Trump and Kim, according to the gift shop website. The coin comes in a black velvet case with a plastic protective cover set.

The White House has said it didn’t create the coin and the gift shop notes that the token is different from the one created by the White House Communications Agency.

What should we expect from Trump-Kim summit?

Insight from Philip Wegmann, commentary writer with the Washington Examiner.

On Friday, Trump said that a high-stakes summit between him and Kim Jong Un is back on for June 12, following a lengthy meeting with a top North Korean official in the Oval Office.

“We'll be meeting on June 12 in Singapore," the president told reporters after the North Korean emissary left the White House.