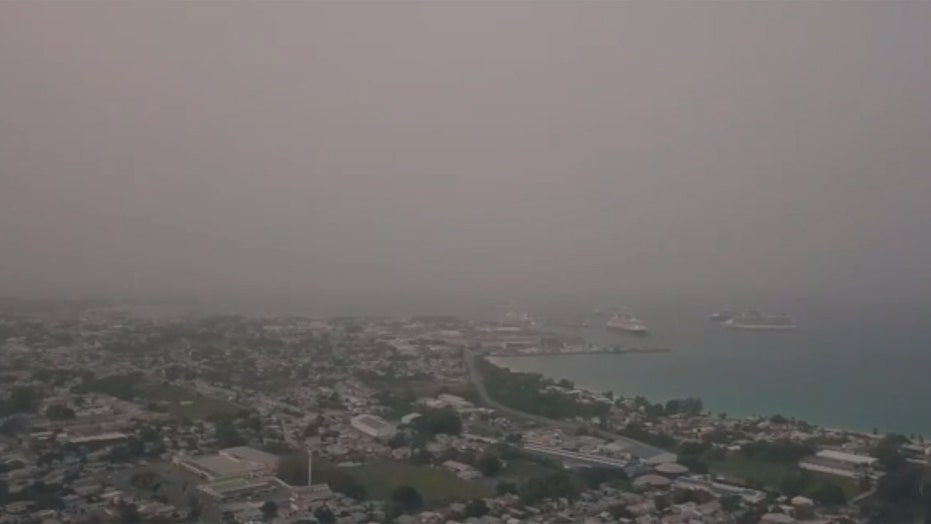 The sunny, blue skies of the Caribbean were shrouded in dust on Monday as a dense plume of Saharan dust that experts say hasn’t been seen in half a century moved into the region as it makes its way towards the U.S.

The National Weather Service (NWS) office in San Juan, Puerto Rico, said that Saharan dust had overspread this area on Monday morning, with visibility of only 5 miles reported.

"Saharan dust concentrations are expected to peak today and tomorrow," forecasters said. "Visibilities near and even below 6 miles are likely across the region, with the dust concentrations declining during the day on Wednesday, though still remaining quite high."

Extremely hazy conditions and limited visibility were reported from Antigua down to Trinidad & Tobago, with the event expected to last until late Tuesday.

Extremely dusty conditions can be seen over Bridgetown, Barbados as a Saharan dust cloud reached the Caribbean on Monday. (Alexander James via Storyful)

The dust was so thick that the Barbados Meteorological Services Department issued a “severe dust haze warning,” urging precautions due to reduced visibility and potential respiratory problems.

Many took to social media to show how conditions changed in just one day.

“Your eyes burn,” one person told Storyful. “You feel it in your lungs and the air feels really heavy, like the wind feels heavy.”

Others also remarked how the dusty air was triggering allergies and coughing.

Air quality across most of the region fell to record “hazardous” levels, and experts who nicknamed the event the “Godzilla dust cloud” warned people to stay indoors and use air filters if they have one.

“This is the most significant event in the past 50 years,” Pablo Méndez Lázaro, an environmental health specialist with the University of Puerto Rico told the Associated Press. “Conditions are dangerous in many Caribbean islands.”

The National Oceanic and Atmospheric Administration (NOAA) said the plume was first captured on June 7, blowing west off the African continent over the Atlantic.

This satellite photo provided by the National Oceanic and Atmospheric Administration, NOAA, shows a could of dust coming from the Sahara desert arriving to the Caribbean Monday, June 22, 2020. (NOAA via AP)

The National Hurricane Center's (NHC) Tropical Analysis and Forecast Branch said Monday on Twitter the densest part of the SAL plume was over the central Caribbean Sea and will continue spreading westward.

The plume can be seen in a deep orange-and-light pink blob on satellite imagery.

"Although it is normal to see SAL outbreaks in June & July, this one is quite significant," the group tweeted.

Although much of the dust remains above the surface and causes hazy skies and colorful sunsets, it can aggravate those with respiratory issues.

Many health specialists have said they are concerned about those battling respiratory symptoms tied to COVID-19.

The dust plume is forecast to travel toward the U.S. and arrive along the Gulf Coast by the end of the week.

Another feature that comes with these massive dust clouds is really beautiful sunrises and sunsets as the sun reflects off of the dust.

Dramatic sunsets can be expected across the South this week.

Fox News' Brandon Noriega  and the Associated Press contributed to this report.