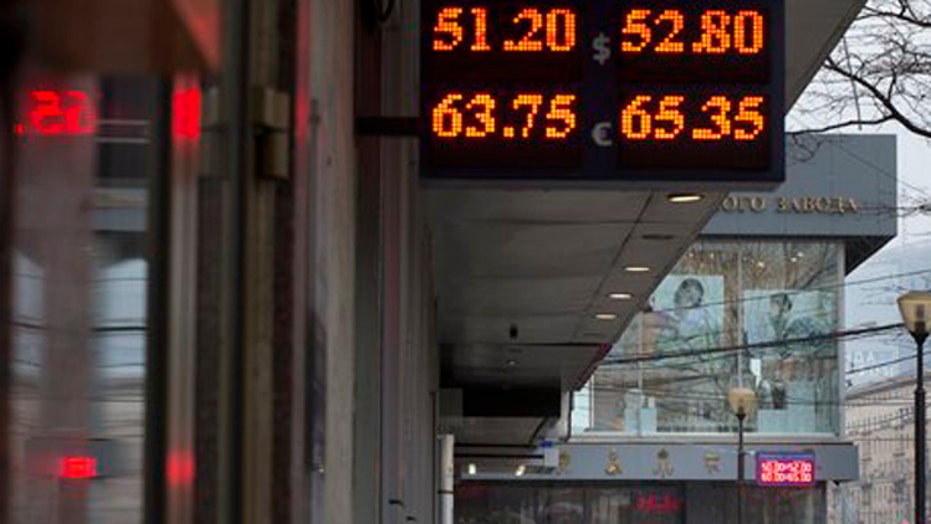 Russian official says economy will contract by 0.8% in 2015

MOSCOW – The Russian government has for the first time acknowledged that the country will fall into recession next year, battered by the combination of Western sanctions and a plunge in the price of its oil exports.

The economic development ministry on Tuesday revised its GDP forecast for 2015 from growth of 1.2 percent to a drop of 0.8 percent. Disposable income is expected to decline by 2.8 percent against the previously expected 0.4 percent growth.

As Russian markets dropped in the wake of the forecast downgrade, Finance Minister Anton Siluanov cautioned that the new prediction is too gloomy. He told Russian news agency it is only "an early estimate and it is still being discussed."

Russia's economy has been damaged by low oil prices, a key export and the backbone of the state budget, as well as Western sanctions over its role in eastern Ukraine. The sanctions are hurting Russian banks and investment sentiment is down. The national currency, the ruble, has dropped by more than 40 percent this year, raising concerns of a spike in inflation that can hurt spending.

The release of the forecast on Tuesday afternoon reversed a modest rally in the Russian market, bringing the ruble 3.5 percent lower against the dollar, to 53 per dollar.

Siluanov said the ruble is oversold and its current exchange rate would correlate to the oil price of $60 per barrel. The global price of oil, Brent, traded around $70 a barrel on Tuesday.

Russia has a solid balance sheet, extremely low sovereign debt and sizeable reserves in foreign currencies, but its dependence on oil leaves it at the mercy of the international market. And its increasing political isolation risks discouraging foreign investment.

"The real damage from the collapsing ruble and oil price is to investment and growth," said Chris Weafer, senior partner at Moscow-based Macro-Advisory, said in a note to investors.

"Russia is a non-investible country for all but the bravest of hedge fund investors right now, and will remain in this category until both the ruble and oil stabilize at minimum. "