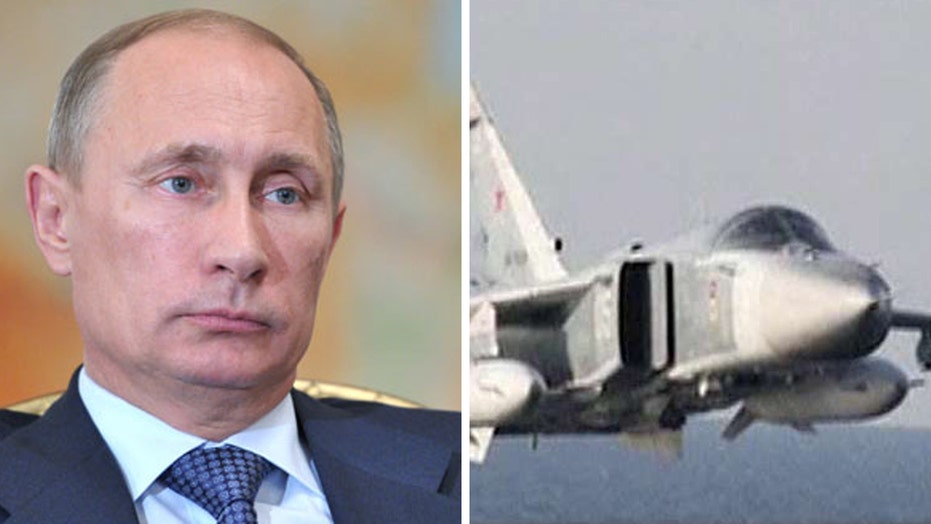 What message is Putin sending with US Navy flyby?

A defense official told Fox News that two Russian Su-24 attack aircraft approached the USS Donald Cook (DDG-75) at an “unsafe” speed and altitude as a helicopter was taking off from the flight deck. The jets came within 1,000 yards of the destroyer in their initial encounter Monday. The following day, a Russian jet came within just feet of the destroyer.

"As a safety precaution, flight operations were suspended until the Su-24s departed the area," said the U.S. European Command, which oversees U.S. military operations in that area.

A spokesman for the Russian defense ministry said on Thursday that the pilots of Russian Su-24 jets saw the ship and turned back "while using all measures of precaution."

Maj. Gen. Igor Konashenkov said he was baffled by what he described as the "distressed reaction of our American counterparts."

It was unclear when or if the U.S. government would formally protest the Russian actions, which come at a time of tensions between Washington and Moscow over Russia's annexation of Crimea, its military intervention in eastern Ukraine and fears among former Soviet states in eastern Europe that Russian aggression could threaten their independence.

"This incident ... is entirely inconsistent with the professional norms of militaries operating in proximity to each other in international waters and international airspace," Earnest said.

European Command released a Navy photo showing one Su-24 soaring past the Cook at close range.

A Navy video clip shows another low-altitude pass with a U.S. sailor shouting, "Below the bridge wing," meaning the Russian plane was flying below the level of the Cook's navigation bridge.

"We have deep concerns about the unsafe and unprofessional Russian flight maneuvers," European Command said in its written statement. "These actions have the potential to unnecessarily escalate tensions between countries, and could result in a miscalculation or accident that could cause serious injury or death."

The U.S. believes the Russian actions may have violated a 1970s agreement meant to prevent unsafe incidents at sea. The agreement was between the U.S. and the former Soviet Union but remains in force with Russia.