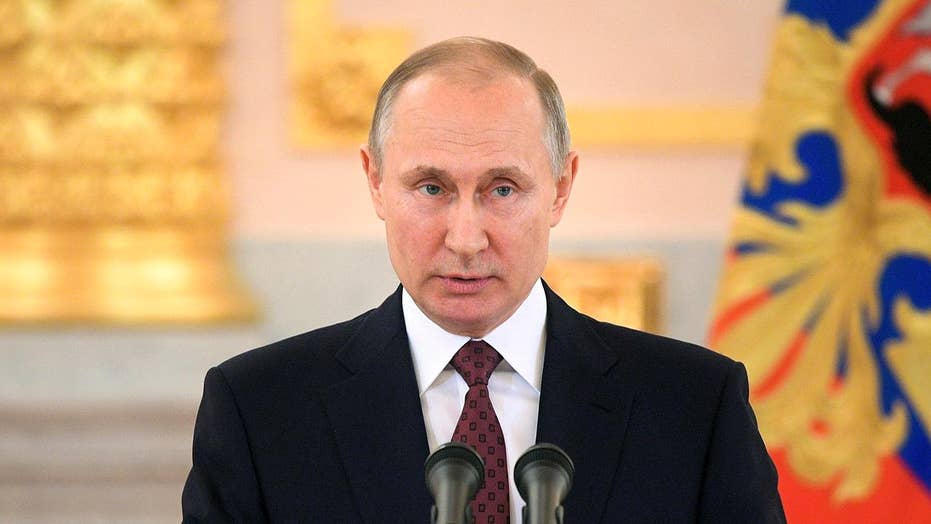 Eric Shawn: Russia acts like 'one of those rogue countries'

Russia is acting like "one of those rogue countries" in its support of the Syrian regime after the deadly chemical weapons attack earlier this month, British Ambassador to the United Nations Karen Pierce told Fox News on Sunday.

"We find it astounding, as do many people, that a country that helped build the chemical weapons convention and the global nonproliferation regime, that Russia can now be one of those rogue countries that has been looking to undo it," she said in an exclusive Fox News interview. When asked if she thinks Russia is a rogue country, she replied, "I think it has those tendencies."

Pierce was one of the diplomats who led the debate at the United Nations Security Council over the airstrikes on Syrian dictator Bashar al-Assad's chemical weapons facilities. Britain, along with the U.S. and France, carried out the attacks in response to allegations that Assad's regime used chemical weapons, barrel bombs filled with chlorine and sarin gas, against his own people in the city of Douma on April 7. She pointedly placed the blame not just on Assad, but also on Russia for its continuing support of his government and repeated blocking of Security Council resolutions aimed at trying to end the devastating war.

"The U.N. was founded with a noble purpose and with noble principles. And if the U.N. can't deal with this sort of situation, then why have it?" Pierce asked.

"It is the price of keeping the U.N. in being, that there is a veto. I think it is therefore incumbent on people like the P-5 (the permanent members of the Security Council, the U.S., Britain, France, Russia and China) to uphold international law, to uphold the principles and purposes of the U.N., and to do something about such crises as this, and what you have with Russia is one P-5 member who ought to have a special responsibility. That P-5 member is blocking the U.N. and the West being able to help resolve this problem."

Pierce said the responsibility especially has rested on Russia, and she called on Moscow to cooperate with the international community. "We would much rather get back to a stage where Russia worked with the rest of the P-5 and the Security Council to find a way to bring the Assad regime to the negotiating table, and get back into the political process, to have a cessation of hostilities, to dismantle the chemical weapons, and for there to be accountability."

She continued, "There are some very serious questions as to why Russia is supporting Assad in breaking international law to this extent, why they condone the suffering and the killing of so many innocent civilians in Syria."

'. . . we look to the Russians to come back into the international fold and help us resolve this conflict.'

So far, Russian President Vladimir Putin's government has vetoed 12 Security Council resolutions dealing with Syria, and six addressing Assad's chemical weapons. A new French, British and U.S. draft resolution has been circulated to the 15 council members and is expected to address the chemical weapons issue, as well as the political and humanitarian issues further.

Pierce would not predict whether Moscow would veto the next resolution too. "I think it represents the will of the vast majority of people on the Security Council, including China. So, over the next few days and weeks, we will be pursuing that with the Secretary General, and we look to the Russians to come back into the international fold and help us resolve this conflict."

"President Assad himself has shown repeatedly that left to his own devices, he is not going to come to the peace table," she noted.

Pierce also dismissed allegations from Russia and some conspiracy theorists that the Douma attack, and the attempted assassination of an ex-Russian spy and his daughter in Britain, actually were the work of Washington and London. "Frankly, I think this is another 1984. It's an attempt to rewrite the news, to rewrite history in their own image and it just won't wash."

The Organization for the Prohibition of Chemical Weapons, an international inspection agency, has determined that the nerve agent was a Russian-grade military agent.

"Only Russia has the motive, the means and the method to carry out such an attack, and a track record as well," Pierce said.

She started her current job less than one month ago and will be back attending the next Security Council meeting this coming week, officials said.