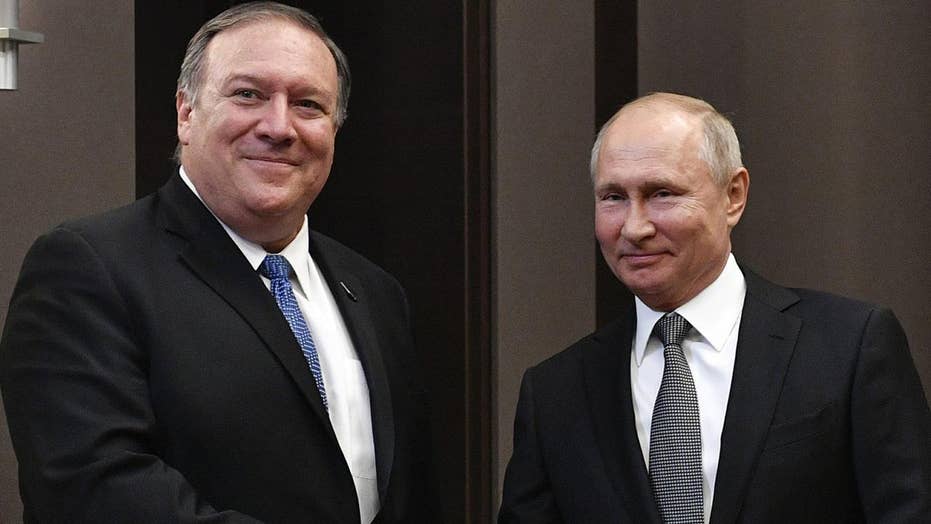 Pompeo meets with Putin amid US tensions with Iran

Russia’s President Vladimir Putin warned the U.S.  Thursday not to take military action against Iran following the recent downing of an American drone and attacks on oil tankers near the Strait of Hormuz.

Speaking on a televised call-in show, Putin said U.S. military action against Iran – which Washington blames for both events -- would be a “catastrophe for the region as a minimum" and trigger an escalation of hostilities with unpredictable results.

The comments came just days after the Trump administration announced that 1,000 additional American troops would be deployed to the Middle East.

TRUMP SAYS IRAN’S US DRONE SHOOT-DOWN MAY HAVE BEEN ‘MISTAKE’, BUT ‘COUNTRY WILL NOT STAND FOR IT’

The Pentagon has said that deployment includes security forces and troops for additional surveillance and intelligence gathering in the region.

The downing of the drone by a surface-to-air missile earlier Thursday was the most recent Iranian provocation in the region, coming on the heels of a disputed attack on a pair of oil tankers in the Gulf of Oman last week -- which the U.S. has blamed on Iran.

Iran claimed the U.S. drone on Thursday was over Iranian airspace when it was shot down.

Pentagon releases video of Iran shooting down US drone

A ministry spokesman, Abbas Mousavi, was quoted by the semi-official Tasnim news agency as saying that Iran cannot condone the "illegal trespassing and invading of the country's skies by any kind of foreign flying object."

Tensions also have been running high recently between the U.S. and Russia, stimulated by the near-collision between a Russian destroyer and an American warship occurring in the Philippine Sea earlier this month.