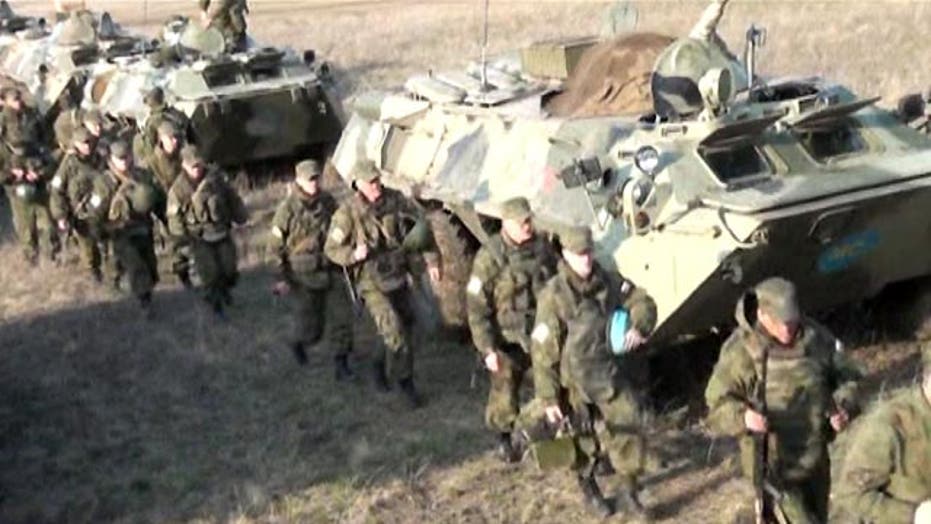 Russian President Vladimir Putin is calling on rebels in eastern Ukraine to “stop advancing,” hours after Ukraine announced that steps have been agreed upon with Russia for a future cease-fire in the region.

Putin, speaking in the Mongolian capital of Ulan Bator, said he came up with a 7-point peace plan on the plane trip there in which Kiev must withdraw its troops and stop its artillery strikes.

"The warring parties should immediately coordinate and do the following things together," Putin said in televised comments. "The first thing is for the armed forces and insurgents of the south-east of Ukraine to stop active advancing in the Donetsk and Luhansk regions.

"Second is for the Ukrainian military to withdraw their troops at a safe distance that will make artillery and other strikes on populated areas impossible," he added.

Putin also urged an unconditional exchange of prisoners and said he expected a final agreement between Kiev and the rebels to be reached Friday at peace talks in Minsk, Belarus.

The remarks came after the office of Ukrainian President Petro Poroshenko released a statement saying that "mutual understanding was reached regarding the steps that will contribute to the establishment of peace."

The changes appeared in Ukrainian, Russian and English-language versions issued by the office.

The statements appeared to indicate that both sides were in agreement on conditions necessary for a cease-fire, not that one would take effect soon.

Putin's spokesman, Dmitry Peskov, was quoted by Russian news agencies on Wednesday as saying the leaders had "largely agreed on steps that would be conducive to a cease-fire," but repeated that Russia is not involved in the fighting.

Vladislav Brrig, a rebel official, told The Associated Press, "As long as Ukrainian forces are on the territory of the Donetsk People's Republic there can be no cease-fire"

The rebels ignored a 10-day unilateral cease-fire that Poroshenko had called in June.

Russian markets jumped on first reports of an agreement. The MICEX benchmark was 3 percent higher while the ruble rose 1.2 percent against the U.S. dollar.

Germany's Dax index, which has been particularly sensitive to news regarding the Ukrainian crisis because of the country's economic ties with Russia, was up 1.6 percent.

At midday, the MICEX had eased to 2.7 percent higher and the DAX was up 1.2 percent.

Obama said it was too early to tell what the announcement meant. He noted previous unsuccessful attempts and questioned whether the separatists would abide by any cease-fire.

"We haven't seen a lot of follow-up on so-called announced cease-fires," Obama said. "Having said that, if in fact Russia is prepared to stop financing, arming, training, in many cases joining with Russian troops activities in Ukraine and is serious about a political settlement, that is something we all hope for."

Ukraine and the West have accused Russia of sending its troops and weapons to support pro-Russian insurgents who have been fighting government forces in eastern Ukraine since mid-April. Moscow has vehemently denied this charge.

That denial leaves unclear how effective the truce announced Wednesday would prove to be. After a meeting with Poroshenko last week, Putin had said a cease-fire was not discussed because Russia was not a party to the conflict.

Rebel leaders said earlier this week that they would respect Ukraine's sovereignty in exchange for autonomy. The rebels previously have called for full independence for their regions or possible absorption into Russia. Poroshenko has spoken in favor of devolving some of the central government's power to regions, but that is far short of autonomy for the rebel regions.

Over the weekend, the European Union leaders agreed to prepare a new round of sanctions that could be enacted in a week, after NATO accused Russia of sending tanks and troops into southeastern Ukraine.

Fighting in eastern Ukraine has killed nearly 2,600 people and forced more than 340,000 to flee their homes, according to the U.N.

Earlier Wednesday, Reuters reported that separatist rebels in Ukraine were close to taking back control of the Donetsk airport from government forces in what would be the insurgents' most significant gain since their latest offensive began last week.

"The airport is 95 percent under our control. Practically, we are holding it by now. Some remaining Ukrainian troops need to be cleared," Aleksandar Timofeyev, a leader of one of the main rebel units in Donetsk, told Reuters. "The Ukrainian Army is retreating. It's more of a flight by now. Reasonable ones give up their weapons and go. Others stay in the ground for good."

A rebel source told the news agency that an attempt to storm the airport was under way: "It will soon be over."

Meanwhile, Russia’s defense ministry announced Wednesday that the forces in charge of its nuclear arsenal will conduct exercises this month involving more than 4,000 soldiers and 400 technical units, including aircraft.

The RIA Novosti news agency quoted the defense ministry as saying that the exercises will take place in the Altai region of south-central Russia, according to Reuters.

Dmitry Andreyev, a major in the strategic rocket forces, said troops will be "conducting combat missions in conditions of active radio-electronic jamming and intensive enemy actions in areas of troop deployment."