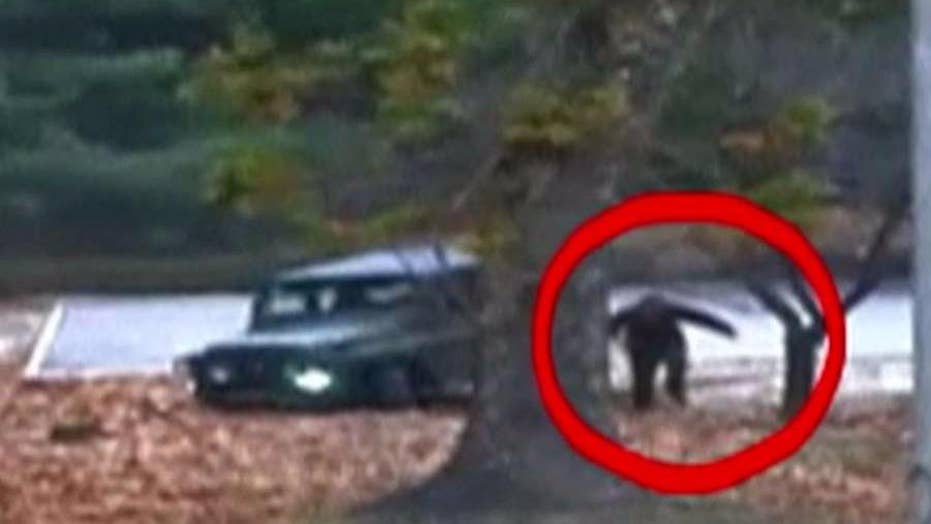 A skeleton-filled ghost ship carrying the remains of eight ill-fated seafarers washed ashore on Japan’s North Korean-facing coast, the Japanese Coast Guard said Monday -- days after the body of a suspected North Korean man and parts of another wrecked wooden craft were discovered on a Japanese island.

The grisly find could be evidence of desperate defectors trying a new route to freedom after despot Kim Jong Un has clamped down on those fleeing the Hermit Kingdom this year.

A Japanese resident spotted the 22-foot wooden boat Friday floating in Miyazawa Beach in Oga, Akita Prefecture, along the Sea of Japan, Japan Times reported. Officials searched the vessel Sunday and Monday and found several of the remains were “skeletonized,” indicating a long period had elapsed before it washed ashore. The remains were so severely decomposed it was hard to decipher if they were men or women. The 68-year-old woman who initially spotted the boat told Kyodo News she saw rescue workers carrying skeletal remains using stretchers.

The wooden boat filled with skeletal remains was discovered by a Japanese resident on Friday. (Kyodo via Reuters)

"I was surprised to see the boat in such a bad condition," the woman told the Japanese news site.

The discovery has puzzled Japanese officials, who found no clues that indicated the ship’s origin. The Coast Guard said the boat may have come from North Korea, according to Kyodo News.

Monday’s gruesome discovery follows a series of bizarre findings within the last week, including that of a man’s body on Sado Island, located off the coast of Japan’s northwestern prefecture of Niigata, and wooden boat parts, the coast guard official said, according to Reuters. The body was found about 6:30 a.m. on Saturday and is believed to be from North Korea after they found Korean letters written near the body.

The coast guard also found a pack of cigarettes and other personal belongings with Korean letters scrawled on them near the body, the official said. It’s still unclear how he died.

And on Thursday night, a boat with eight North Korean men were located at the seaside town of Yurihonjo. The fishermen, who were standing outside of the boat when police found them, appeared to have stopped at the shore because they were having boat issues. Police said they were most likely not defectors and were “hoping to return home soon” after about a month out at sea. The boat, carrying squid, also had a sign saying “Chongjin,” possibly related to a major port city on North Korea's eastern coast, Kyodo News reported.

Three other North Korean men were rescued on a capsized boat in the Sea of Japan two weeks ago. They were sent back to the Hermit Kingdom on a North Korean vessel.

Waters between Japan and the Korean Peninsula are known to be rich fishing grounds, where poachers from North Korea and China have been spotted. About 650 miles sit between the coast of North Korea and Japan across the Sea of Japan. Wreckage from North Korean boats regularly washes ashore in northern Japan during winter due to seasonal winds.

An illustration shows the distance between North Korea and Japan after its latest missile launch in September. (Reuters)

At least nine bodies have drifted to the Japanese coast this year before Monday’s skeleton-filled ghost ship discovery. Another three boats have been collected on and off the coastline, Japan Times reported. More bodies have been pulled from the waters in past years – 11 in 2016 and 27 in 2015. Japan and North Korea have no diplomatic ties and tensions are often high due to their colonial and wartime history and Pyongyang's missile and nuclear threats. Kim Jong Un had previously threatened multiple times to "sink" Japan with a nuclear bomb and fired a missile that flew over a Japanese island before splashing into the Pacific Ocean.

North Koreans typically escape the brutal regime by traveling through China. An estimated 1,000 people flee Kim Jong Un’s volatile regime each year, and a total of about 30,000 North Koreans have made the treacherous escape since the end of the Korean War.

A North Korean soldier’s defection to the South recently made international headlines when he dashed across the JSA at the Demilitarized Zone to freedom. He was shot five times and went through two major surgeries before regaining consciousness.

This year, North Korean defectors successfully escaping the regime fell by 12.7 percent, according to the Telegraph.