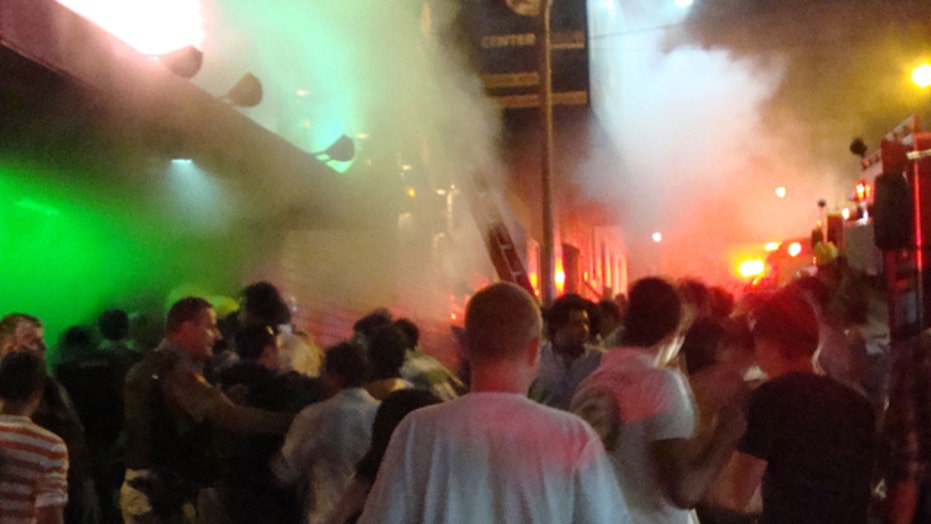 SANTA MARIA, Brazil – Penny-pinching by a band known for its onstage pyrotechnic displays may have cost more than 230 people their lives at a nightclub in southern Brazil, according to a state police inspector leading the investigation into this weekend's deadly blaze.

Inspector Marcelo Arigony told reporters at a news conference Tuesday that members of the band knowingly purchased flares meant for outdoor use because they cost a mere $1.25 a piece, compared with the $35 price tag for an indoor flare.

"The flare lit was for outdoor use only, and the people who lit them know that," said Arigony. "They chose to buy those because they were cheaper than those that can be used indoors."

The repercussions of that choice continued to send shock waves through Santa Maria, a college town of 260,000 people that's been stunned by the early Sunday morning tragedy in the Kiss nightclub.

The Rio Grande do Sul state forensics department raised the death toll Tuesday from 231 to 234 to account for three victims who did not appear on the original list of the dead. Authorities say more than 120 people remain hospitalized for smoke inhalation and burns, with dozens of them in critical condition.

The blaze began at around 2:30 am local time, during a performance by Gurizada Fandangueira, a country music band that had made the use of pyrotechnics a trademark of their shows.

Police have said the club's ceiling was covered with an insulating foam made from a combustible material that appeared to have ignited after it came in contact with a spark from a flare lit during the performance.

After the fire extinguisher malfunctioned, the blaze spread throughout the packed club at lightning speed, emitting a thick, toxic smoke. Because Kiss apparently had neither an alarm nor a sprinkler system and only one working exit, the crowd was left to search desperately for a way out.

About 50 of the victims were found in the club's two bathrooms, where the blinding smoke caused them to believe the doors were exits.

Police investigator Arigony said people headed to the bathrooms because the only lights in the dark club were coming from there, and the patrons mistook them for exits.

"There were diverse irregularities," he said. "Any child could have seen that this establishment should not have been open."

Outraged locals marched through Santa Maria Tuesday to demand justice for the dead, an unusual move in a country where public protests are rare. The demonstration interrupted the police news conference, even as Arigony pledged to investigate everyone involved in the tragedy -- including the authorities charged with making sure such establishments are up to code, such as firefighters and city officials.

The fire inspired nationwide action, and several mayors said they would crack down on nightclubs and other venues in their cities.

The government of the country's biggest city, Sao Paulo, promised tougher security regulations for nightclubs and other places where many people gather. Since the fire, a Rio de Janeiro consumer complaint hotline has received more than 60 calls denouncing hazardous conditions at night spots, theaters, supermarkets, schools, hospitals and shopping malls around the state. Blocked emergency exits and nonexistent fire alarms and extinguishers top the list of most common complaints.

G1, Globo television network's Internet portal, said police searched two other Santa Maria nightspots owned by Mauro Hoffmann, one of the partners of the Kiss nightclub, for evidence that could help shed light on the investigation.

Monday night's searches yielded no evidence, and the site reported computers that stored images recorded by the Kiss club's security cameras have not yet been found. G1 cites a police investigator as saying the owners have insisted the club's closed-circuit camera system hadn't worked in months.

Both have been provisionally detained, along with two of the band members, and a judge has frozen the assets of both of the club's owners, pending the investigation.

The fire appeared to mark a possible turning point for a country that has long turned a blind eye to safety and infrastructure concerns. The disaster, the worst fire of its kind in more than a decade, has also raised questions of whether Brazilian authorities are up to the task of ensuring safety in such venues as the country prepares to host next year's World Cup and the 2016 Olympics.

One of Brazil's biggest newspapers, O Globo, published an editorial Tuesday saying it was time for action.

"The tragedy in Santa Maria forces us to seriously reflect over our national culture of leniency, contempt and corruption," it said. "We must start from the principle that the mea culpa belongs to us all: public servants, owners of establishments that disregard safety regulations, and regular citizens who flout them."

Soccer legend Pele, too, urged the Brazilian government to "make safety and security a priority in this country."

"So many young people are no longer with us, they had entire lives ahead of them. I ask God to protect them and take care of their families," he wrote on Twitter.

According to state safety codes here, clubs should have one fire extinguisher every 1,500 square feet as well as multiple emergency exits. Limits on the number of people admitted are to be strictly respected. None of that appears to have happened at the Santa Maria nightclub.

Rodrigo Martins, a guitarist for the group playing that night, told Globo TV network in an interview Monday that the flames broke out minutes after the employment of a pyrotechnic machine that fans out colored sparks.

"I thought I was going to die there," Martins said. "There was nothing I could do, with the fire spreading and people screaming in front."

Most of the dead were college students 18 to 21 years old, but they also included some minors. Almost all died from smoke inhalation rather than burns. The Rio Grande do Sul state health secretary, Ciro Simoni, said 84 of the injured remained were in serious condition on Tuesday.

The blaze was the deadliest in Brazil since at least 1961, when a fire that swept through a circus killed 503 people in Niteroi, Rio de Janeiro.

Sunday's fire also appeared to be the worst at a nightclub anywhere in the world since December 2000, when a welding accident reportedly set off a fire at a club in Luoyang, China, killing 309 people.