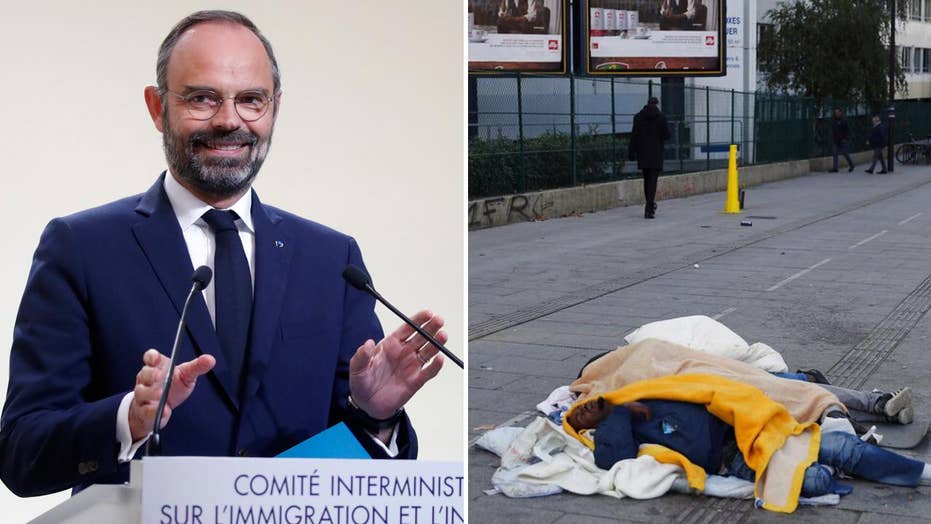 France's plan to impose migrant quotas: Will it work?

Prime Minister Edouard Philippe has revealed new quotas in France for migrant workers and restrictions on the kind of health care they can receive. The measures, he said, will help France 'take back control' over its expanding migrant population. But will these new policies help France and its economy, or will they end up being more of a detriment than the migrants themselves? The Heritage Foundation's Robin Simcox weighs in.

Police in Paris cleared on Thursday more than 1,500 migrants out of a pair of makeshift tent camps, as officials are vowing that the communities will no longer be tolerated in the French capital.

The massive operation targeting the camps underneath highways in northern Paris began in the early morning and involved nearly 600 police officers. By the time it was finished, an estimated 1,606 migrants were taken away — and police say they will keep a presence in the areas to may sure they don’t come back.

“I will no longer tolerate these installations by the roadside here or anywhere else on public spaces in Paris,” Didier Lallement, the leader of Paris’ police department, was quoted by Reuters as saying.

FRANCE TO IMPOSE MIGRANT QUOTES TO 'TAKE BACK CONTROL'

Buses picked up the migrants – described by Reuters as being mostly men from Africa and the Middle East – and later dropped them off at gyms and other public venues in the Paris area while the makeshift structures they used to call home were demolished.

Interior Minister Christophe Castaner announced that state-sponsored facilities will now house the migrants as their asylum requests are being processed — but any that are denied must leave French territory and some risk deportation.

Some of those who have been granted asylum, he added, are refusing to stay at the housing that they have been offered, Reuters reported.

Police officers evacuate a migrant from a camp on Thursday in Paris. (AP)

MAN IN HIS 80s ARRESTED IN CONNECTION WITH FRANCE MOSQUE ATTACK

The removals came a day after Prime Minister Edouard Philippe revealed new quotas in France for migrant workers and restrictions on the kind of health care they can receive. Those measures, he said, will help France “take back control” over its expanding migrant population.

“Retaking control means when we say yes it really means yes, and when we say no it really means no,” Philippe, who serves under President Emmanuel Macron, said Wednesday. “We’ve decided to go far in opening up where we think it’s good for France, and go far in restrictions where the abuses are intolerable.”

Marine Le Pen, leader of the National Rally party and 2017 presidential candidate, remains Macron’s toughest competition for president. Her party topped Macron’s in the European election this summer — it's considered “the first round” of presidential elections.

The migrants were bused away to several facilities in and around Paris Thursday after they were removed from the camps. (AP)

French authorities cleared a sprawling migrant camp in Calais in 2016 but migrants have since set up a series of camps in Paris that have been demolished by authorities — and then later rebuilt in different parts of the city, according to Reuters.

“[Police] have told me time and again the camps would not come back, but each time they have reappeared,” Paris Mayor Anne Hidalgo was quoted as telling reporters Tuesday.