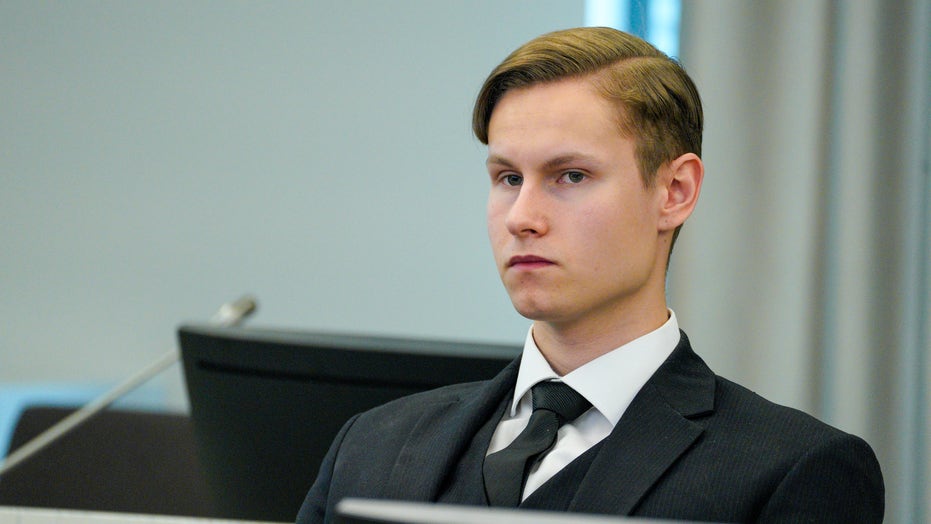 A white nationalist Norwegian who killed his stepsister and then stormed an Oslo mosque and opened fire, hitting no one, was found guilty Thursday and sentenced to 21 years in prison, the longest jail term under Norwegian law.

Philip Manshaus, who had said in court that he regretted not having caused more damage, “has proven to be an extremely dangerous person,” prosecutor Johan Oeverberg said as he demanded the maximum penalty.

Defendant Philip Manshaus sits in a court room in Asker and Baerum district court in Sandvika, Norway, as he waits for the verdict on the last day of his trial, Thursday, Jun 11, 2020. The Norwegian man is charged with murder and terrorism in the killing of his stepsister and the storming of an Oslo mosque, and, according to a Norwegian prosecutor, should get the maximum 21 years in prison. (Håkon Mosvold Larsen/NTB Scanpix via AP, POOL)

On Aug. 10, 2019, Manshaus, 22, killed his 17-year-old stepsister, Johanne Zhangjia Ihle-Hansen, by shooting her four times with a hunting rifle at their home in the Oslo suburb of Baerum. Ihle-Hansen was adopted from China as a 2-year-old and her mother later married Manshaus’ father.

Then he drove to a nearby mosque where three men were preparing for Eid al-Adha celebrations. Manshaus fired four shots from a rifle at the mosque’s glass door before he was overpowered by one of the men, Muhammad Rafiq. Manshaus wore a bulletproof vest and a helmet with a video camera in the attack and was armed with a hunting rifle and a shotgun.

Judge Annika Lindstroem of the Oslo District Court said Manshaus had plans to kill as many people as possible and set the mosque on fire.

District court Judge Annika Lindström announces the verdict against Philip Manshaus at the district court of Baerum and Sandvika, Norway, on the last day of his trial, Thursday, Jun 11, 2020. Manshaus, a Norwegian man, is charged with murder and terrorism in the killing of his stepsister and the storming of an Oslo mosque. (Håkon Mosvold Larsen/NTB Scanpix via AP, POOL)

He believed that “Europe is under attack from people of ethnic origin other than his own” and that “the white race is on the brink of extinction,” said Lindstroem, adding that Manshaus claimed he was acting “in self-defense against the enemy.”

In court, Manshaus confessed to the acts but called them “emergency justice.” Investigators found a photo of Adolf Hitler on his cell phone.

The judge said the sentence was a “preventive detention,” a special prison term in Norway for criminals considered dangerous to society.

“The killing and the attack show what extremely violent and cynical actions Manshaus has the ability and willingness to carry out,” she said during the detailed reading of the verdict online.

The Norwegian man is charged with murder and terrorism in the killing of his stepsister and the storming of an Oslo mosque, and, according to a Norwegian prosecutor, should get the maximum 21 years in prison. (Håkon Mosvold Larsen/NTB Scanpix via AP, POOL)

Lindstroem added that Manshaus was deemed mentally sane at the time.

In a final comment after the sentencing, Manshaus said “I don’t confess my guilt, so I can’t accept the judgment. That would be contradictory.″ He and his defense lawyer Unni Fries said they would consider whether to appeal.

The judge said Manshaus was inspired by shootings in March 2019 in New Zealand, where a gunman targeted two mosques, killing 51 people, and in August 2019 in El Paso, Texas, where an assailant targeted Hispanics and left at least 22 dead.

His plans and his reference to national socialism also recall the views of Norwegian right-wing extremist Anders Behring Breivik, who in 2011 killed 77 people in a bombing and shooting rampage in Norway. Breivik, who gave a Nazi salute in the courtroom, is serving a 21-year prison sentence for carrying out a terror attack.