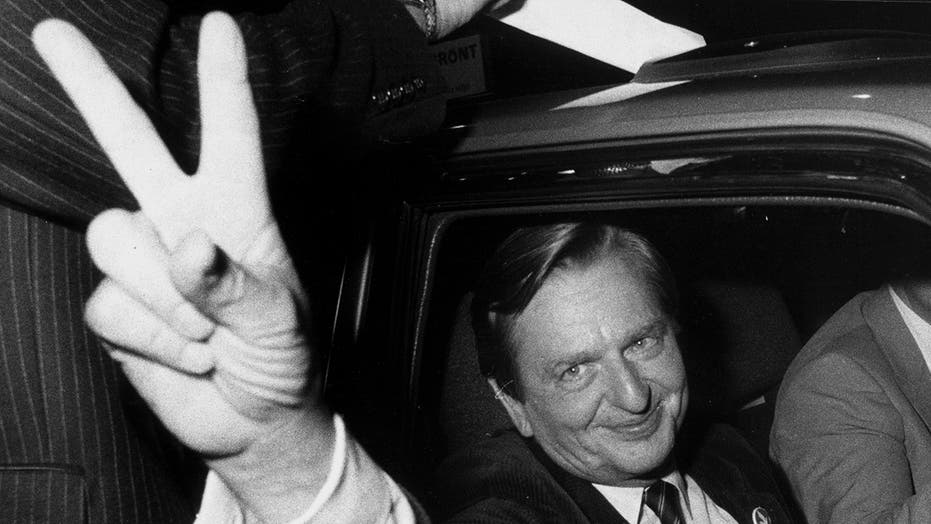 An investigation into the assassination of Swedish Prime Minister Olof Palme that’s spanned for more than 30 years was closed on Wednesday after authorities determined the main suspect has been dead for decades, according to reports.

Prime Minister Palme, who often ventured out without a security detail, was shot dead in Stockholm on Feb. 28, 1986, while walking home from a movie theater with his wife Lisbet.

Sweden’s Chief Prosecutor Krister Petersson announced in a news conference in Stockholm on Wednesday that the investigation is closed because the main suspect, Stig Engstrom, died in 2000.

SWEDEN REMEMBERS 30TH ANNIVERSARY OF THE MURDER OF OLAF PALME

“Stig Engstrom is deceased, and therefore I am not able to start proceedings or even interview him, that is why I decided to discontinue the investigation,” Petersson told reporters. “Since he has died, I cannot indict him.”

Hans Melander, head of the investigation, said that 134 people confessed to the murder — 29 directly to police — and some 10,000 people had been questioned during the 34-year probe.

“I am completely convinced that there are other people who believe in other solutions, but as Krister says, this is what we came up with and believe in,” Melander added at the news conference.

In a separate news conference later Wednesday, Swedish Prime Minister Stefan Lofven, a Social Democrat like Palme, said, "The fact that a country's prime minister was murdered is a national trauma. I now have hope that the wound can heal."

“A thorough work has been carried out by the prosecutors and they have gone to the bottom of it,” he continued. “The best thing would have, of course, been a conviction.”

Marten Palme, the son of Olof and Lisbet Palme, told Swedish radio that, “I also think Engstrom is the perpetrator,” according to the Associated Press.

A different suspect in the case, Christer Pettersson, was convicted in Palme’s death in 1988 after a trial that relied heavily on testimony from the prime minister’s wife. Lisbet was injured in the shooting, but survived. An appeals court ultimately threw out the conviction, citing a lack of substantial evidence. Pettersson died in 2004, United Press International reported.

After Pettersson left prison, conspiracy theories whirled in the media over who could have been responsible for Palme’s demise. Some speculated the CIA assassinated him. Others alleged rogue Swedish military members or even Kurdish separatists plotted the killing.

During his tenure, Palme was known for opposing the Vietnam War, supporting communist-backed governments in Cuba and Nicaragua and criticizing South Africa's apartheid rule.

Immediately after Palme was killed, thousands of Swedes flooded the scene of his death with red roses, a symbol of his Social Democratic Party, building a meter-high wall of flowers.

Melander, the chief investigator, labeled the police effort into finding Palme's killer “one of the world’s largest investigations” and compared it to probes into the 1963 murder of John F. Kennedy and the 1988 Lockerbie bombing of Pan Am Flight 103 over Scotland.

At the time of the slaying, the 52-year-old Engstrom was reportedly one of the first people at the murder scene and was briefly considered a possible suspect. Chief Prosecutor Petersson said Engstrom, who worked at a nearby insurance agency, had a military background, was member of a shooting club, often worked late and had a drinking problem.

Yet Engstrom's actions on the night of the murder are unclear. Several witnesses gave descriptions of the fleeing killer that matched Engstrom, while others said he wasn’t even at the scene. Engstrom himself claimed to have been present from the beginning, said he spoke to Lisbet Palme and police and attempted to resuscitate the victim.

Soon after the murder, Engstrom appeared in Swedish media and developed an increasingly detailed story of his involvement in the events that night, even criticizing the police investigation. He claimed witnesses who thought they were describing the killer had in fact been describing him as he ran to catch up with police officers in pursuit of the assassin.

The police then labeled him as an unreliable and inconsistent witness and classified him as a person of no interest.