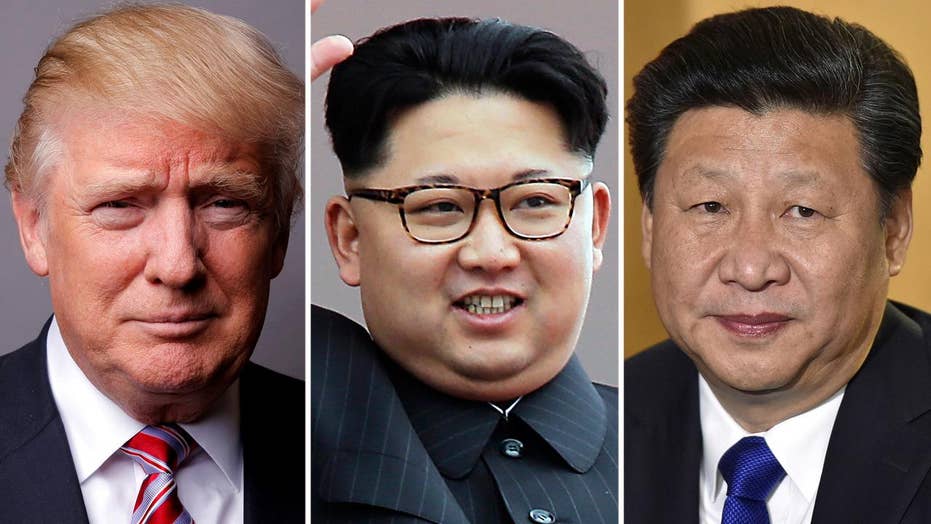 Can President Trump pressure China to rein in North Korea?

Insight from Michael Auslin, director of Japan studies at the American Enterprise Institute and author of 'The End of the Asian Century'

He’s said to be a chain-smoking, beer-drinking, maniacal tyrant who binges on Swiss cheese while his people starve. Sen. John McCain, R-Ariz., called him a “crazy fat kid.” President Trump scolded him for “acting very, very badly.” In neighboring China, people derisively refer to him as "Kim Fatty the Third."

North Korea’s third-generation leader, Kim Jong Un, rules over a nation so cut off from the world it has earned the nickname "Hermit Kingdom." And within the secretive communist dictatorship, the 33-year-old strongman himself remains an enigma.

Kim followed in the footsteps of his father and grandfather, whose portraits look down on Pyongyang streets. (AP)

“The insights that we have tell us that he is spontaneous, erratic, still worried about his place in the power structure, and maneuvering to eliminate any potential kind of adversary or competitor and does so obviously ruthlessly," then-Secretary of State John Kerry said in a 2013 interview.

Kim’s enemies are executed with anti-aircraft guns. An estimated one in every 100 North Koreans are deemed political prisoners, and typically die in brutal work camps. Experts believe that since he took power following the death of his father, Kim has had 350 people executed, many government and military officials perceived as a threat to his authoritarian rule.

Kim Jong Un is a third-generation ruler of the impoverished nation.

“It was something that you can’t dare to look at with your eyes wide open,” a defector recently told South Korean officials. “The brutal killing of the people using an anti-aircraft machine gun was unprecedented in North Korean history and has only been witnessed in the Kim Jong Un era. You will hardly confront Kim once you see an execution.”

Kim’s girth and exorbitant spending provide a damning contrast to a populace ravaged by frequent famine and wrenching poverty. He is known to travel aboard his own personal, bulletproof train, luxuriate aboard a 30-foot yacht and fancies sports cars, race horses and designer shoes. Those lavish habits may have been inherited from his father, Kim Jong Il, a brutal bon vivant who ruled the nation from 1994-2011.

But the elder Kim was seen as a savvy manipulator of the west, who took his belligerence to the brink to gain concessions from the west only to pull back and behave, relatively speaking. His scion’s saber-rattling has unnerved much of the world, including North Korea’s increasingly impatient patron, China.

Kim has repeatedly taunted the world with threats and tests of both missiles and nuclear weapons, elements which, if brought together, pose existential threats to enemies South Korea and Japan, and even potentially the U.S.

Longtime observers of the northern peninsula have no consensus on Kim’s true motivation, much less his mental state. Still, one thread runs through all three generations, said Chang.

“The end game of the North Korean regime has always been the maintenance of the Kim family rule,” said Gordon Chang, author of “Nuclear Showdown: North Korea Takes on the World.”

NUKE TESTING 101: HOW, AND WHY, NORTH KOREA TESTS ITS BOMBS

Kim, who was reportedly educated at a private, English-language school in Switzerland in the mid-1990s, maintains the cult of personality established by his grandfather, the founder and “eternal president” of North Korea, Kim Il Sung, who was installed by Joseph Stalin. The nation’s original “dear leader” trained his son, Kim Jong Il, for more than 20 years to take over, and Kim Jong Ill in turn spent a little over two years preparing his own son to rule.

Given Kim’s age and relentless purging of threats from the ranks of Pyongyang’s elite, he could remain in power for decades. Yet, with what is known about his health and his growing list of enemies, it could be substantially less.

The murder of his eldest brother, Kim Jong Nam, in Malaysia earlier this year was believed to be an assassination ordered by Kim to eliminate a rival who may have had China’s backing. Another brother, Kim Jong Chul, is not seen as a credible threat or successor to Kim. Their sister, Kim Yo Jong, was considered to have been the most capable according to Chang, but in a male-dominated Confucian society, a woman cannot rule the country.

There are signs the rest of the world, including the Trump administration, is prepared to take action to contain and perhaps even change the brutal regime, an effort that could prevent a nuclear showdown – or prompt one.

Kim has threatened Japan, South Korea and the United States, and his belligerence has increased in recent years. (Associated Press)

Chang believes that Pyongyang is less than four years away from putting a nuclear warhead on an intercontinental ballistic missile that could reach the U.S. mainland. But Seoul has the most to fear from the prospect of Kim backing his near-daily threats with nuclear warheads.

“The Kim family rule rests on one legitimizing goal – and that is to rule over all of the Korean peninsula, the destruction of the South Korean state,” Kim said.

The Trump administration has signaled it will protect its allies, including South Korea and Japan. During U.S. Secretary of State Rex Tillerson’s first official trip to South Korea, he told Fox News that “nothing has been taken off the table,” when asked whether he would rule out allowing defensive nukes on the Korean peninsula.

Chang believes the grim news that trickles out of North Korea underscores the need for the world to address North Korea before it is too late.